Nudists dare to be bare despite recent resort closures 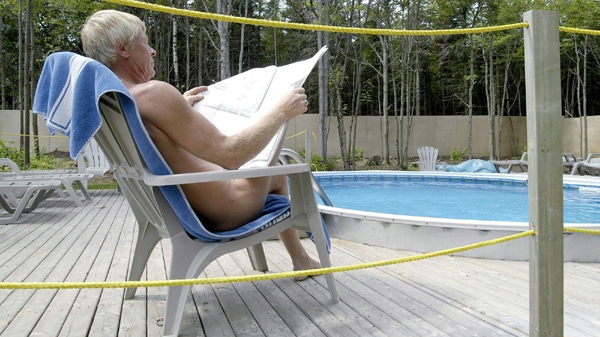 Gary Lowther, avid nudist and owner of The Oasis, a nudist camp in Cavendish, P.E.I. reads a newspaper by the swimming one recent hot summer day. (Brian McInnis / THE CANADIAN PRESS)

WINNIPEG - Some nudist resorts are closing and membership numbers declining, but those who drop their clothes say that's no reason to go undercover.

In fact, naturists, as they prefer to be known, insist that their hobby is alive and well. It's just adjusting for the 21st century.

"I hear old naturist club owners, those same ones that are failing, complaining that people aren't the way they used to be," Stephane Deschenes, spokesman for the Federation of Canadian Naturists, said in an interview.

"That's true. You can either complain or you can adjust."

The latest casualty is the Crocus Grove Sun Club, which for 40 years was based out of a 100-site campground northeast of Winnipeg. Last month, owners Ray and Susan Ryynanen announced they were changing over to a regular campground to compete with others in the area.

"On any given weekend last summer, the various members of the Manitoba Association of Campgrounds and Parks were full ... and we weren't," Susan Ryynanen said. "We're down to 20 (full-season) campsite rentals."

Members of the Crocus Grove club have said poor marketing and mismanagement were to blame for the declining turnout. But Ryynanen said naturists no longer feel the need to gather in an official resort to shed their clothes. With just a few clicks of a mouse, naturists can find a beach or park where being nude is tolerated -- and there's no rental or membership fee required.

"A number of people have said, 'Well, the beach is free,' and as a business, we certainly can't compete with that," she said.

Last year, the Glen Echo Family Nudist Park north of Toronto told its members that the property was being sold and clothing would be mandatory.

But enthusiasts insist the future is bright.

"When naturism started in Canada ... the expectation in terms of amenities was minimal," Deschenes said. "Camping meant a tent. Today camping means a trailer. It means you want electricity, you want running water and sewage."

Deschenes said having more two-income families in Canada means people, nudists or not, are too busy to rough it, and want some level of campground comfort. He bought the Bare Oaks Family Naturist Park in Sharon, Ont., three years ago. Since then, its membership has grown to 500 from 135.

"A lot of these clubs that are closing now are older clubs that haven't kept up with the times."

Deschenes concedes that membership levels have dropped in naturist federations in Canada and the United States in recent years, but believes that's because information about naturism is more widely available.

"It used to be that the only way to find out where (nudist) clubs were was to belong to a federation. The Internet has meant you don't need to buy a guide and you can find all the information you want without ever going through a federation."

For now, Crocus Grove members in Manitoba are searching for a new home. They plan to buy their own piece of land and run a resort themselves.

"It is a niche market, we'll admit that much," said enthusiast John Kundert. "But we're far, far from having a situation where the numbers are in decline."