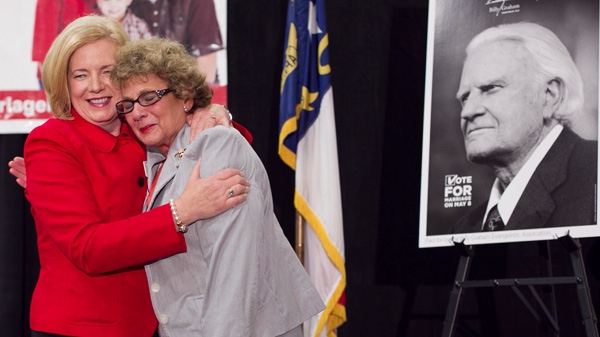 Mary Frances Forrester, the wife of the late N.C. State Sen. James Forrester, right, embraces Tami Fitzgerald from Vote For Marriage NC as they celebrate the passage of Amendment One during an election night party Tuesday May 8, 2012 in Raleigh, N.C. (AP Photo/The News & Observer, Robert Willett)

RALEIGH, N.C. - North Carolina voters approved a constitutional amendment on Tuesday defining marriage solely as a union between a man and a woman, making it the 30th U.S. state to adopt such a ban.

With 35 per cent of precincts reporting Tuesday night, unofficial returns showed the amendment passing with about 58 per cent of the vote to 42 per cent against.

Meanwhile, supporters had run their own ad campaigns and church leaders urged Sunday congregations to vote for the amendment. The Rev. Billy Graham, who at 93 remains influential even though his last crusade was in 2005, was featured in full-page newspaper ads supporting the amendment.

Both sides spent a combined $3 million on their campaigns.

North Carolina law already bans gay marriage, like nine other U.S. states, but an amendment would effectively slam the door shut on same-sex marriages. The amendment also goes beyond state law by voiding other types of domestic unions from carrying legal status, which opponents warn could disrupt protection orders for unmarried couples.

Six states -- all in the Northeast except Iowa -- and the District of Columbia allow same-sex marriages.

The North Carolina amendment was placed on the ballot after Republicans took over control of the state Legislature after the 2010 elections, a role the Republican Party hadn't enjoyed for 140 years.

Joe Easterling, who described himself as a devout Christian, voted for the amendment at a polling place in Wake Forest.

"I know that some people may argue that the Bible may not necessarily be applicable, or it should not be applicable, on such policy matters. But even looking at nature itself, procreation is impossible without a man and a woman. And because of those things, I think it is important that the state of North Carolina's laws are compatible with the laws of nature but, more importantly, with the laws of God."

Linda Toanone, who voted against the amendment, said people are born gay and it is not their choice.

"We think everybody should have the same rights as everyone else. If you're gay, lesbian, straight -- whatever," she said.

North Carolina is the latest presidential swing state to weigh in on gay marriage. Florida, Virginia and Ohio all have constitutional amendments against gay marriage, and Obama's election-year vagueness on gay marriage has come under fresh scrutiny.

Obama, who supports most gay rights, has stopped short of backing gay marriage. Without clarification, he's said for the past year and a half that his personal views on the matter are "evolving."

Education Secretary Arne Duncan broke ranks with the White House on Monday, stating his unequivocal support for same-sex marriage one day after Vice-President Joe Biden said he is "absolutely comfortable" with same-sex married couples getting the same rights at heterosexual married couples.

One fault line that could determine the result is generational. Older voters, who tend to be more reliable voters, are expected to back the amendment.

State House Speaker Thom Tillis, a Republican from a Charlotte suburb, said even if the amendment is passed, it will be reversed as today's young adults age.

"It's a generational issue," Tillis told a student group at North Carolina State University in March about the amendment he supports. "If it passes, I think it will be repealed within 20 years."