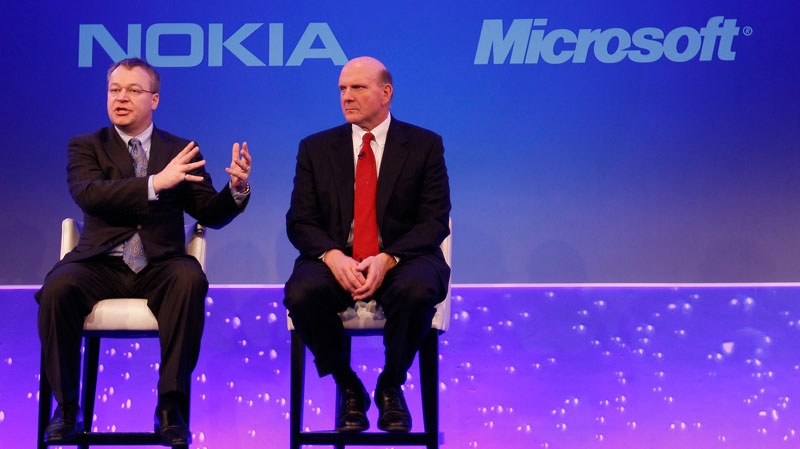 Microsoft has announced a new partnership with Nokia, the world's largest mobile phone company, in an alliance that will see the Windows phone operating system running on Nokia smartphones.

The move represents an attempt to claw back some of the market share that has been taken over by Apple's iPhone, RIM's BlackBerry and phones that run on Google's new Android operating system.

However, shares in Nokia didn't see the boost in European trading that Elop was likely hoping for, instead plunging to US$10.09 a share in early trading in Helsinki, Finland.

"Shares in Nokia have fallen as much as 10 per cent in European trading," Bunting told CTV's Canada AM on Friday morning.

"That's because investors are skeptical that even with Nokia using Windows' operating system that the company can catch up with the popularity of the iPhone from Apple or phones that run on Google's Android operating system."

Nokia has struggled in recent years as Apple has taken over as a powerful force in the mobile phone sector -- a field that was once dominated by Nokia.

"Nokia's global market share for mobile phones has plunged to 27 per cent from 51 per cent since the iPhone was launched back in 2007," Bunting said.

A statement posted on Microsoft's website said the two companies will begin "collaborating immediately" on the design, development and marketing of productivity solutions that incorporate Microsoft software on Nokia devices.

According to the release, Nokia has more than 200 million smartphone customers around the world, making it the largest smartphone manufacturer in the world.

"Today's announcement will enable us to expand Microsoft Office Mobile to Nokia smartphone owners worldwide and allow them to collaborate on Office documents from anywhere, as part of our strategy to provide the best productivity experience across the PC, phone and browser," Elop said in the statement.