NHL in Canada: Is there too much of a good thing? 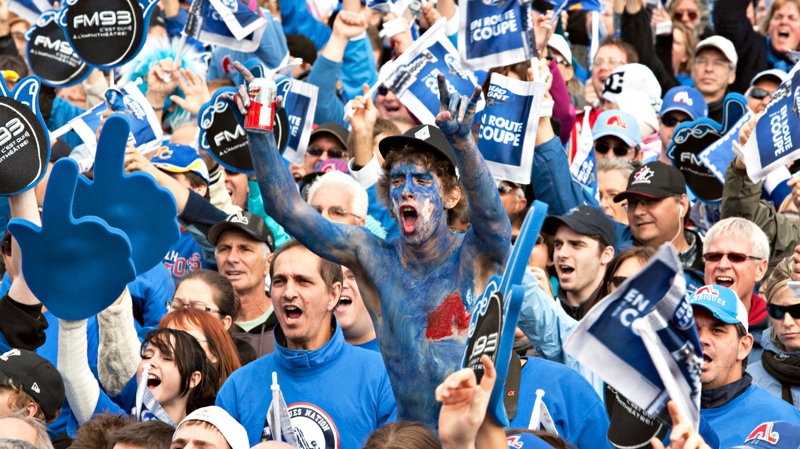 Over 60,000 people, mostly dressed in blue, gather on the Plains of Abraham in a gathering called "La Marche Bleue" asking for a comeback of an NHL team in the city and a new arena in Quebec City, Saturday, October 2, 2010. (Jacques Boissinot / THE CANADIAN PRESS)

Over the past year, much ink has been spilled about the resurrection of long-moribund NHL franchises in Quebec City and Winnipeg.

There is also continuing hope that a franchise will be planted in Hamilton or another medium-sized city in southern Ontario, despite the titanic defeat of BlackBerry king Jim Balsillie's bid to bring the Phoenix Coyotes north.

Blame it on Sidney Crosby's hockey heroics during the gold medal Olympic Game -- which had even casual hockey fans dancing in the streets -- or on Tie Domi's dating life, but it would appear that Canadians have never been crazier about hockey.

Are we too gaga about our beloved national pastime? While the truth about our love for the game may be surprising, politicians seem to be eager to play along.

While governments usually spend tax money on things like roads, transit and schools, funding for NHL arenas somehow became a real topic of discussion this year.

Prime Minister Stephen Harper even mused about using public funds to build new sports complexes, as long as it was done in a fair and equitable way across the country.

"My friends, we are all great fans of professional sports," Harper told supporters in Quebec City in September. "But professional sports are first and foremost the responsibility of the private sector. And if there is a role for the federal government, it must be equitable across the country and also affordable."

Prior to Harper's comments, Quebec City Mayor Regis Labeaume had been pressing for as much as $175 million from Ottawa to build a new arena as a way to lure the big league back home.

But if using taxpayer money to build rinks for private-sector magnates, who then pay athletes millions every year, sounds outlandish, it shouldn't.

In fact, Quebec Premier Jean Charest pledged 45 per cent worth of funding for the project, which shocked many fiscally-conscious Canadians.

In Edmonton, meanwhile, Oilers-owner Daryl Katz, who is also the city's highest-profile billionaire, has been using his clout to push for a new arena. Of course, he's pushing for public funds to get it done.

As leverage, Katz has met with business groups in Quebec City and elsewhere in an apparent move to force Edmonton to pay up. Sound like blackmail?

According to Edmonton columnist Fish Griwkowsky, the city might be better off without the Oilers, who finished at the bottom of the league last year.

"I can only speak for myself, in that I'd be relieved to be free of the ever-present bombardment of advertising of a hockey product everyone in the city knows is inferior, both in terms of our history and within the current league of over-paid athletes," Griwkowsky told CTV.ca recently.

In fact, getting rid of the team might actually help civic pride, as difficult as that would seem to cities starved for NHL action.

"In terms of sports we'd certainly pay more attention to local accomplishments by actual Edmontonians, and disposable spending money would pour out to a much wider base of entrepreneurs," Griwkowsky suggested.

In fact, as a nation, would we be better off if we loosened our collective grip on hockey sticks and picked up a tennis racket or a soccer ball?

Here are a few reasons why doing so might be a good idea.

As a country, we're behind the play

First of all, hockey is a rough sport and not something which can be played seriously by seniors, unless of course your last name is Howe.

According to Statistics Canada, only 30 per cent of Canadians "regularly participated in one or more sports in 2005," which was a dramatic drop from the early 90s, when that figure hovered around 50 per cent.

The stats suggest that only 17 per cent of Canadians over 55 played sports in 2005, which is the most recent year the figures are available.

Statisticians suggested that the drop in activity can be blamed on an aging population.

Indeed, can an aging population be expected to lace-up skates and attack the net with the same gusto as younger folks?

More troubling is the rise in spectatorship: as a nation, we're more content to watch than to participate. According to StatsCan, 9.2 million adults were "involved" in amateur sports, but only as spectators. That figure represents a 20 per cent increase from 1998.

Given those stats, do we really need more NHL franchises, so more of us can sit on more couches in more Canadian cities eating more wings and more potato chips?

Secondly, at the grass-roots level, pining for an NHL team might be a step in the wrong direction.

While hockey gets a huge share of airtime in Canada, it appears that younger Canadians actually prefer soccer. According to the federal General Society Survey, 44 per cent of kids aged between five and 14 play soccer, which is the highest participation rate among all sports -- hockey included.

Enrollment for hockey in Scarborough, an eastern section of Toronto which is home to many new Canadians, is actually so low that only 1,600 players signed up last season to play. At one time, upwards of 15,000 kids were part of the local hockey league.

Michael Thompson, a Toronto city councillor, suggested that a shortened season could help lower costs and bring kids back to the game.

"Maybe kids can play half the season (with) half the costs associated with that," he told CTV Toronto earlier this year.

Hockey Canada has taken notice, and officials recently revealed that only 9.1 per cent of Canadian boys between five and 19 now play the sport.

"It's clear, if you look at our statistics today and you look at trends over the next 10 to 20 years, we need to start addressing some of these issues," warned Hockey Canada chief Scott Smith at a summit earlier this year.

However, despite a relative drop in popularity among younger people, hockey still appears to get the majority of corporate funding, perhaps at the expense of soccer and other sports.

All the world's a stage, but is Canada a player?

Finally, on a global scale, it could be argued that Canada's reputation suffers from a top-down focus on Canada.

While Crosby's "golden goal" will go down as a major moment in Canada's sports history, its relevance outside the country could be debated.

Indeed, while an estimated 26.5 million people in Canada watched the gold medal game, only 27.6 million American viewers were tuned in at the peak of the broadcast.

Meanwhile, Canada's soccer squad did not qualify for the 2010 FIFA World Cup and Canada does not have a male singles tennis player ranked in the ATP 100.

While Canada spends billions on foreign aid, perhaps diversifying our sporting mentality may be a way to flex our increasing economic and cultural clout?

It would appear that some sporting leaders, such as UFC president Dana White, agree with the idea that Canada and hockey shouldn't be intrinsically linked.

In fact, White recently told The Canadian Press that Montreal-bred fighter Georges St-Pierre was the most famous athlete ever produced in Canada.

"I like Wayne Gretzky," the outspoken White said. "I was just with him, his wife and his kids a month ago over at one of the casinos here in Las Vegas. Super nice guy. Got nothing against him. Fly him over to England, fly him over to Asia, fly him to anywhere in Europe, Georges St-Pierre gets mobbed, nobody knows who the hell Wayne Gretzky is."

While White is known for hyperbole, he may have a point.