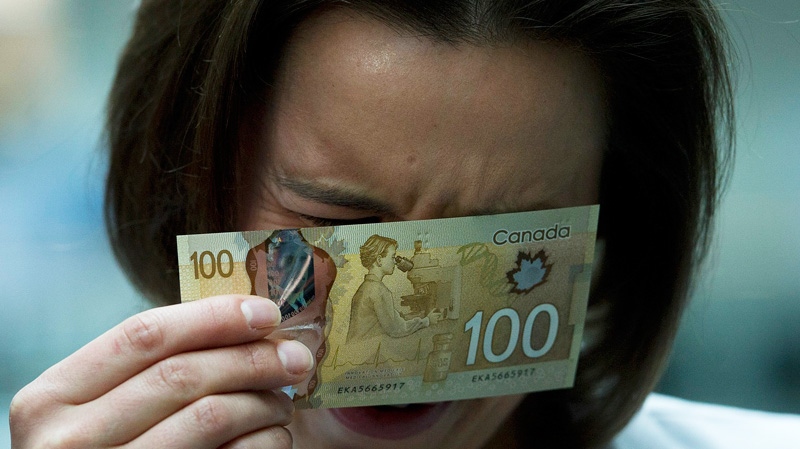 Martine Warren, a scientific advisor for the Bank of Canada has a close look at the bank's new circulating $100 bill, Canada's first polymer bank note, in Toronto on Monday Nov. 14, 2011. (Nathan Denette / THE CANADIAN PRESS)

TORONTO - If money talks, Canadian retailers may not be listening.

Store owners who are impressed with the security innovations built into the new $100 bill aren't in any rush to stuff them into their tills or accept them from customers, they said a day after the notes were put into circulation.

The new polymer bank notes, unveiled on Monday by the Bank of Canada, are expected to keep fraudsters at bay and spare taxpayers from the costs of replacing the bills every seven years.

But while retailers say the bills may be forge-proof, they're not thief-proof.

They say the high-tech design won't be enough to make customers embrace the inherently inconvenient denomination or persuade safety-conscious store owners to accept them.

The existing paper money will be phased out over the next two years, with polymer $50 bills being circulated next March and the remaining denominations replaced in 2013.

Bank of Canada Director Daniel Johnson predicted Canadians would hasten to make use of the $100 bills after realizing how difficult they are to counterfeit.

But store owners are reluctant to get on board.

Anil Dangra, manager of a Mac's Convenience Store in Nanaimo, B.C., said he currently refuses to allow customers to pay with $100 bills after regular business hours as a way of protecting staff working the cash alone at night.

The new currency may give counterfeiters pause, but wouldn't prove any less attractive to would-be thieves, he said.

"It has nothing to do with the counterfeit bills, it has to do with how much money you have in the till," Dangra said in a telephone interview.

The security features will certainly benefit businesses which are particularly vulnerable to potential fraudsters, Dangra said, adding his store has been fooled by counterfeit bills twice in the past three months.

Those benefits, however, may not be felt until more commonly used bills are put into circulation. Dangra said the vast majority of cash transactions are completed using smaller bills, adding only one to two customers a week try to pay using the $100 denomination.

Zhakil Mohammed, manager of a 7-eleven store in downtown Toronto, said the growing prevalence of debit cards will also prevent the new currency from gaining traction.

The high percentage of customers paying for purchases electronically is not confined to Mohammed's centrally located store.

Steve Tennant, vice-president of the Canadian Convenience Stores Association, said Canada has the third highest global rate of debit card use per capita.

The country's strong banking system and reasonable user fees make debit and credit transactions attractive to both venders and customers alike, he said, adding Canada is well on its way to adopting forms of electronic purchasing already en vogue in other countries.

Transactions completed by cellphones that have been synchronized to a customer's bank account will likely take off with Canadians already accustomed to cash-free commerce, Tennant said.

"More and more people are embracing technology and debit cards, and I can readily see where people will make their quick purchases with their cellphones," he said.

The association discourages its members from accepting $100 bills for both staff safety and financial security reasons, Tennant said, adding there are no plans to draft a new policy until more denominations of the next generation bills are in circulation.