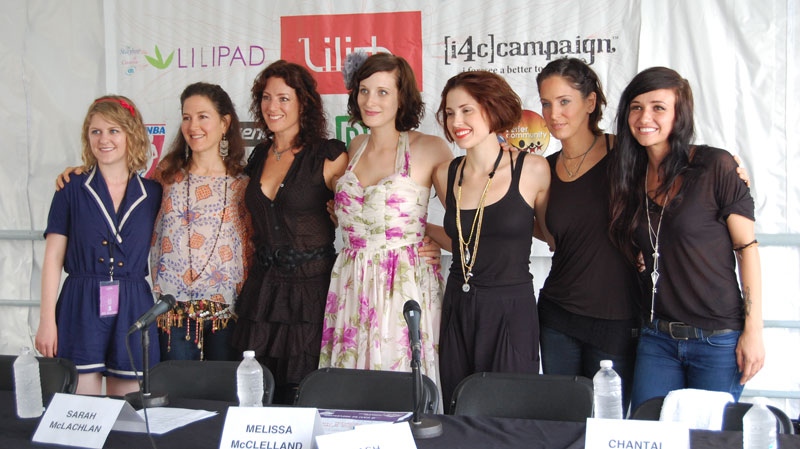 TORONTO - The embattled music industry has seen plenty of casualties over the past years, so it's no small feat that venerable Canadian imprint Nettwerk has survived to celebrate its 25th anniversary with a new book and digital compilation this month.

But the milestone was preceded by a difficult period that saw the departure of marquee acts including Avril Lavigne, the Barenaked Ladies and Billy Talent and the disastrous resurrection of the all-female tour Lilith Fair.

"At a certain point, with success and all that sort of stuff, you start believing the hype and then things tend to get out of control," said Pierre Tremblay, a former senior Nettwerk vice-president who left in 2009 to form his own company, bringing Billy Talent with him.

"And you know, you just have to be careful about those things."

The powerful Vancouver-based company -- both a record label and management firm -- made its name on quality acts and forward-thinking strategizing.

And as far as co-founder and CEO Terry McBride is concerned, Nettwerk hasn't had any more trouble than any other label in a hobbled industry.

"I think the music business has been in a recession for like 11 years," McBride said in a recent telephone interview. "We are not immune to it. No one's immune to it, come on. The business has dropped by 60 per cent.

"How can one not deal with that?"

Indeed, McBride remains unwaveringly confident in the company he started a quarter century ago.

At the time, he and Mark Jowett (who also co-founded Nettwerk alongside Ric Arboit and Dan Fraser) were employees at Odyssey Imports in Vancouver and passionate vinyl addicts who got the idea to launch a record label.

As Denise Ryan's book, "Nettwerk: 25 Years of Music We Love," tells the story, McBride then was a wide-eyed sort, with the looks of a schoolboy but a determined presence.

"It was a phenomenally exciting time in music," reminisced Jowett in a telephone interview.

"It was great to feel like we were really in the thick of it, by ... starting to hook up with all these great bands everywhere that didn't have a home in North America."

Each of Nettwerk's inaugural signees carved out a niche at home and abroad, but the label would wrangle a bigger star in 1987, when McBride won over a teenaged Sarah McLachlan as she racked up a high score in pinball at a Halifax bar.

Blessed with a cherubic voice and a distinct sensibility, McLachlan soon became an international star, eventually racking up three Grammy Awards and dozens of platinum plaques.

Even more impressively, she withstood McBride's lofty demands. He expects his artists to live up to his famous work ethic, and he admits he sometimes has a tendency to run people ragged.

One of McBride's strategies was to follow the heat. Any time he saw a blip of interest at a radio station, he and his artists would follow like a missile, ready to perform and build a bigger audience.

His strategy certainly impressed the Barenaked Ladies, who became interested in hiring McBride as their manager in 1995.

"Terry was really frank and cool," singer Ed Robertson recalled. "He said: 'You know, you guys are great, I'm a big fan, but you look ridiculous. You've got no image consistency and we need to work harder in the U.S. So if you guys are ready to work your asses off in the U.S., I'll take you on.'

"He worked us to the bone for a number of years, but we saw great success from it."

Nettwerk did too, eventually growing into something of a small empire, one that encompassed a record label, management firm and a publishing company, among other pursuits, with offices in Vancouver, New York, L.A., London, Boston, Nashville and Hamburg.

The label still boasts a roster that includes Great Lake Swimmers, Delerium and the Weepies, while the management side includes such clients as k-os, Chantal Kreviazuk, Dido and Raine Maida.

But it's undeniable that the star power of the company's current roster has dimmed.

Lavigne left in 2008. In July of the following year, the Barenaked Ladies followed out the door for the L.A.-based Cam 8 Management firm. The next month, Tremblay departed too, taking Billy Talent, Sweet Thing and Silverstein with him.

While these exits seem to form a trend, McBride insists each incident is isolated.

Nettwerk discovered Lavigne when she was 14, and Jowett received a videotape of the Napanee, Ont., native singing karaoke in her parents' basement.

Though she was scooped up by an American label before Nettwerk could sign her, McBride eventually agreed to manage her career.

He helped her become an international star with three No. 1 albums and platinum sales the world over. And then she was gone.

"She moved to L.A. and at the end of the day, she wanted an L.A-based manager that could pop into her house within like an hour's notice," McBride said by way of explanation.

"I accept that. (But) I don't necessarily think that makes for a better manager."

The Barenaked Ladies, meanwhile, were reeling from then-frontman Steven Page's drug arrest and ensuing departure from the band when they opted to change management.

McBride says their split from Nettwerk was mutual.

"When Steve left, and after the drug bust, it wasn't what I signed up for," he said. "When all that stuff happens, you lose the passion for it. I'm a music manager. I'm not in there to manage dramas. ... Steve got busted like two weeks after a kids' record (2008's 'Snacktime!') came out. It was devastating to everybody."

"And then when Steve left, that whole thing left, it's no longer the Barenaked Ladies. ... It's no longer the artist that I worked with. And I think Ed and the rest of the guys are incredibly talented, but it was time for a change."

McBride points out that neither artist is necessarily better off having left the company.

"Avril hasn't released an album since she left Nettwerk, and that's been over two years. You know, I question that," he said. "BNL, I mean, unfortunately, this album (2010's 'All in Good Time') came and went.

"It's strategies, right? If there's one thing that Nettwerk is good at, it's strategizing."

Indeed, Nettwerk has often kept ahead of the curve.

McBride, 49, has been widely praised for his relentless work ethic and commitment to devising fresh ideas. A fawning 2006 feature in Wired Magazine referenced his "maverick approach to music management."

While other labels were engaging in a futile battle against the Napster revolution, McBride spoke out against litigating music fans over copyrighted material and Nettwerk soon began selling digital music files on their website.

The label was forward thinking in other ways too. Nettwerk pushed early on to have its artists' music featured in television, films and video games before it became the industry norm. And the company was rarely discouraged by international boundaries, pushing their artists onto the airwaves in Europe, Asia and the U.S.

Now, McBride is focused on Polyphonic, a new model that collects all an artist's income streams into one company that allows bands greater control over their businesses.

But that innovative spirit comes at a cost.

When Tremblay left the company, he was quoted as saying Nettwerk had "lost focus" and had been too driven to create a "future music company."

"I came to Nettwerk -- I think it was in 1995 -- mainly because of Terry," Tremblay said. "I believed in what he was doing. He had an honest approach with integrity and was a real hard worker. ...

"And then as things progressed, things change. I was there for 15 years, and in the last couple years, I was seeing a different direction for the company than some of the other people at Nettwerk.

"I don't know that Terry and my visions were that different, but he was taking less of a role in the management side. ... It just came to the point where it made sense for me to part ways and start my own company."

Page, formerly of the Barenaked Ladies, felt that McBride's priorities had changed.

"For us, it was a sense that just things weren't getting done anymore," said Page, whose drug charges were ultimately dropped.

"Or it was like, new ideas for the sake of new ideas, not serving the artist."

And then there were the frustrations of this summer's revived Lilith Fair. The original tour was lucrative for the company, drawing in more than 1.5 million fans over three years.

This year, organizers were forced to cancel about a third of a planned 35 dates. McBride and McLachlan largely blamed a soft market, but some say there were other factors.

"A value that's always been important to Terry is to be fair to the fans and to listen to the fans and so on and so forth -- I don't think the Lilith project was going in that direction at all," Tremblay said.

"I think they overpriced the tickets, there was a bit of gouging going on, you know, all that sort of stuff."

Still, even those who are critical of Nettwerk expect the company to survive these recent setbacks.

"I wish that they'd stick to the original values that really helped build the company to begin with, and I think if they do stick to those, then the company will flourish and continue to grow for a long time."

"It sounds pretty cliche, but it's true," he said.

"I think it's a great company," Tremblay said. "I think it's an important company in Canada. I hope it sticks around for a long time.

McBride, for his part, hardly belies any concern over the future of the company he started some 25 years ago.

In fact, he still seems most at home excitedly discussing where Nettwerk might go next -- even if he prefers not to tip his hand.

"I think we release music that we love and that's why we survive," he said.

"If you set a certain goal, you stick yourself in a sandbox. I like being on the beach."