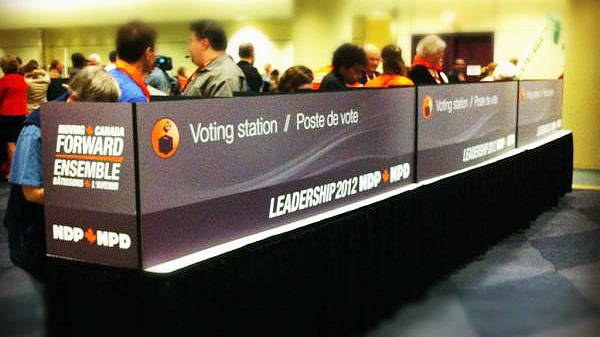 TORONTO - The NDP has not yet called in the police to investigate an orchestrated attempt to sabotage the electronic voting system the party used to choose a new leader.

But it's not ruling out the possibility once it unmasks the hacker responsible for repeated cyber-attacks that caused lengthy delays in Saturday's leadership vote.

The party had hoped to crown their new leader in time for supper-hour newscasts, before television viewers could switch to the Saturday night hockey games. The cyber attacks frustrated those plans; it was after 9 p.m. ET before Thomas Mulcair was declared the winner.

"What we know is that there was an organized attempt to clog the site," Blaikie said.

"We were able to isolate a couple of IP addresses where we knew there were many, almost like a robotic accessing of .... our site, over and over again. For now, that's all we know and we're going to be working with experts in this kind of thing to find out exactly what went on and, once we know the magnitude of it, we'll be able to make further decisions."

The two IP addresses were identified early on, after party members complained they couldn't access the NDP voting site to cast their second ballots. Blaikie said the problem continued throughout the third and fourth ballots, with a third IP address eventually being isolated.

Asked if police have been called in, she said: "Not for the moment, no."

Blaikie said the apparently automated attempts to access the voting site ended up jamming the system so that legitimate voters were unable to get through to cast their ballots. But she said at no point was the integrity of the voting system compromised.

"The system itself was secure. So, it was definitely annoying that somebody managed to clog it up and make it a challenge for our voters to get through. Our voters were persistent and they did vote."

Some 56,000 New Democrats voted in advance and were unaffected by the cyber-attack. Blaikie said about 9,500 voted on each ballot Saturday.

She took the fact that the number of voters didn't change significantly from ballot to ballot as a sign that no one was disenfranchised as a result of the shenanigans.