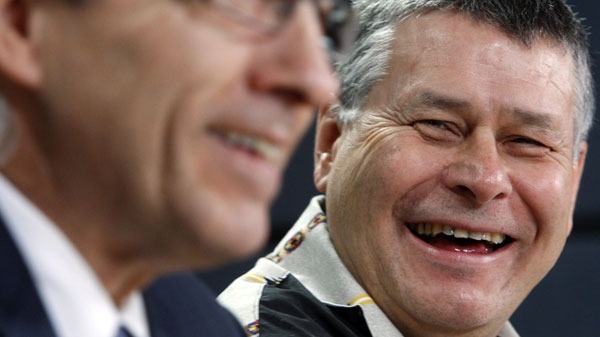 OTTAWA - John Beaucage has given the heartbreak he sees around him a name: the Millennium Scoop.

The First Nations leader was recently hired by the Ontario government to look into aboriginal child welfare and what he found -- not just in Ontario, but across the country -- was despair.

After decades of wrestling with the impact of the residential school system -- and then with the "Sixties Scoop" that placed so many aboriginal children in non-aboriginal homes -- First Nations are now facing another tragedy of lost children in the new millennium.

There are more First Nations children in care right now than at the height of the residential school system. That system was a national disgrace that prompted Prime Minister Stephen Harper to apologize for its catastrophic impact on natives.

Instead of being at home with their parents, brothers and sisters, tens of thousands of First Nations children are in foster homes, staying with distant relatives or living in institutions.

"It's a culmination of decades worth of social ills," Beaucage says.

A disheartening mix of poverty, addiction, history and politics has conspired to separate First Nations children from their parents.

Researchers aren't certain how many native kids are no longer living with their parents. A major study in 2005 pegged the number at 27,500. Since then, provincial and federal data as well as empirical reports suggest the numbers have risen.

That's easily double the size of the cohort forced away from their homes and into residential schools during the late 1940s and 50s -- a brutal period of Canada's history that still haunts First Nations families.

Former auditor general Sheila Fraser estimated First Nations children were eight times more likely to be in care than other Canadian kids. She pointed out that in British Columbia, of all the children in care, about half are aboriginal -- even though aboriginals are only about eight per cent of the population.

"Given the data I've had a chance to see, if anything, it's an underestimation," said Nico Trocme, director of McGill University's Centre for Research on Children and Families.

"It's getting harder to be a parent in these communities."

Jeremy Meawasige is on the cusp of becoming the next child in that pile of statistics.

The 16-year-old Mi'kmaq from the Pictou Landing First Nation in Nova Scotia has myriad challenges: autism, cerebral palsy, hydrocephalus and a tendency to hurt himself.

But his latest affliction comes courtesy of inter-jurisdictional squabbling.

Ever since his mother had a double stroke last year and was no longer able to give her son the support he needed, she has had to rely on government funded social services.

But with each level of government pointing to the other for support, and his mother turning to band generosity in the meantime, Jeremy is now poised to be sent to an institution far from the only home he has ever known.

"They did an assessment on us, and say Jeremy is at the level where he should be institutionalized. I told them, over my dead body," said mother Maurina Beadle.

"I'm the only person he will eat for. If you put him in an institution, that's it."

But with no one willing to provide long-term funding that would cover the costs of supporting Beadle and Jeremy on reserve, authorities want to send him to an institution outside the province.

His supporters say it's a classic case of what has become known as Jordan's Principle.

"Jordan" was Jordan River Anderson, a Cree boy from Manitoba who died in hospital at the age of five as he waited for federal and provincial governments to agree how to pay for his care.

Ottawa and provincial governments have vowed not to let such a thing happen again. They say a child in need of services will receive the services immediately, and the governments will work out the payment scheme later.

"I've decided I'm going to fight for that," she says.

She has launched a formal court challenge, one that echoes a broader dispute taking place at the Federal Court of Canada.

In that case, the First Nations Child and Family Caring Society of Canada, along with the Assembly of First Nations and the Canadian Human Rights Commission, are arguing the discrepancy in funding for child welfare services on reserves versus off reserves constitutes discrimination.

Ottawa contends it's not fair to compare the two.

Cindy Blackstock, executive director of the caring society, says she sees case after case of First Nations children in trouble being sent routinely into care because that's where the funding is instead of trying to help families deal with their problems.

As the lawyers duke it out, laments Beadle, "Jeremy regresses."

It would be myopic, however, to blame only jurisdictional wrangling and funding discrepancies for the high rates of First Nations children in care.

Expert after expert recognizes that family dysfunction is more broadly rooted in poverty, poor health and the oppressive legacy of the residential school system that robbed the parents of first-hand knowledge of how to raise a family.

"The simplest reason why, the most important reason why, is that these children are living in communities where families are facing enormous hardships," says McGill's Trocme. "The supports to bring up kids just aren't there."

A child at risk often comes from a home that is over-crowded, with up to four people to a sparse room. The home may not have clean drinking water. It may have mould or boarded-up windows as the house falls into disrepair.

The parents are often not there, or not paying attention. Instead, they're in their own cycle of trouble, often related to addictions. Or they have not developed the social skills or parenting skills they need to deal with a precarious situation.

In the fridge, there might be some pop or processed food, but little fresh produce.

At school, there would be reading and writing. But not much in the way of library books or gym equipment or things to do after school.

In remote communities, the volunteer network that the urban poor rely on, such as the Salvation Army, shelters or food banks, is virtually non-existent.

In some cases, the child at risk is the victim of violence or abuse. More often than not, when the child welfare system steps in, it's because of neglect.

Neglect, however, "is not trivial," Trocme warns. Studies have shown that neglected children have the hardest time moving beyond their troubles, as their cognitive development becomes impaired.

"They have the absolute worst outcomes," Trocme says.

Still, the Millennium Scoop is not the Sixties Scoop, when children were removed from their homes and adopted by families far from the reserve. There was little discussion then about what would happen to a child once he or she was taken into care.

There is now a recognition that assimilation is not an option, says Beaucage, and there is some attempt to plan for family reunification.

Troubled children are increasingly being removed from their homes, but about half the time, they are placed in other First Nations homes, says Trocme. About 90 per cent of them eventually wind up back home at some point, perhaps as an adult, he says. So the family ties are not being broken as in the past.

"Families don't disappear when you remove a child," he says.

The number of First Nations children in the child welfare system is rising. But slowly funding is also on the rise and so is discussion and innovation about how to help them, he said.

In mainstream society, the number of children in care dropped suddenly in the 1970s. That's when child welfare agencies switched their focus. Instead of removing children from their home as a first resort, they devoted resources to prevention and help for troubled families.

The same approach wasn't applied toward First Nations, Trocme says, but that is changing.

The federal government has added a new layer of child-welfare funding directed toward prevention. It is also funding a growing number of child welfare agencies run by First Nations themselves.

Many First Nations complain that their other child services are so broke that the prevention dollars are sucked away by other more immediate needs.

But Ottawa points to some success in Alberta, where it invested $98 million over five years for its new approach.

The number of children in the care of First Nations agencies in that province has now stabilized, or even edged down slightly, federal documents show.

Not every province has such a program quite yet, although Ottawa hopes to achieve that by next year.

The federal numbers don't take into account the children who are in the hands of provincial agencies. And there are pervasive reports of widespread disillusionment and despair at the local level, says Beaucage.

But there are signs at senior levels of government of creative thinking and a willingness to allow First Nations a stronger hand in child welfare, he says.

"There's a fair bit of flexibility and open-mindedness at the top level," he said.

"We're going to have to measure our success in decades and generations."