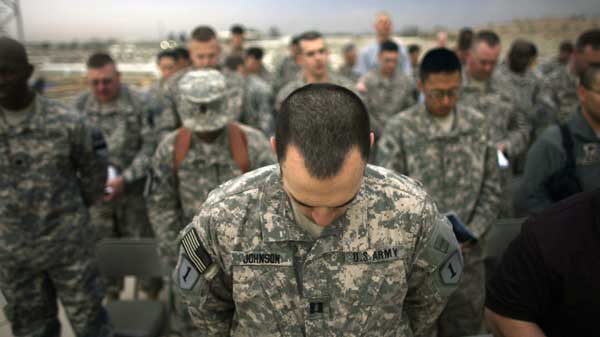 Two soldiers stationed at sprawling military bases in the United States say they have faced persistent harassment due to their Muslim faith, renewing questions about the role of religion in the world's largest armed forces.

Spec. Zachari Klawonn, 21, is set to file a lawsuit with a group called the Military Religious Freedom Foundation, alleging that there is a "systemic issue" with Islamophobia at Fort Hood, Texas, where he is stationed, and throughout the U.S. army.

The second soldier, 20-year-old Pfc. Naser Abdo, is waiting to hear whether he will be granted conscientious objector status and be honourably discharged from the Army. If his application is denied, he says he will refuse deployment to Afghanistan and may face jail time.

Born in Texas to an American mother and a Palestinian father, Abdo adopted Islam at the age of 17. He enlisted two years later, in April 2009, after attending university in Dubai.

Abdo felt he would be "a great asset" to the Army because he could relate religiously and culturally to the people of Iraq and Afghanistan, where more than 150,000 U.S. troops are deployed.

But during basic training at Fort Benning in Georgia, Abdo claims that he was persistently harassed by other soldiers.

He was asked to play the terrorist in training exercises. Soldiers accused him of wanting to kill a Jewish soldier on the base. Meanwhile they told his superiors that he was incapable of killing the enemy, in an effort to have him dismissed from the military, Abdo said.

"F--k you and your God that doesn't exist. Your prophet's a pedophile. God can't save you," he recalls being told by one soldier following a disagreement about which way to trek through the woods on a land navigation drill.

Abdo reported the incident to his superiors and the soldier was disciplined, Abdo said. But the harassment didn't stop.

"It was a constant thing," he told CTV.ca.

After completing his training, Abdo was assigned to the 101st Airborne Division at Fort Campbell, Kentucky -- the third-largest Army base in the U.S. with some 30,000 troops stationed there and another 17,000 deployed in Afghanistan -- where he says the harassment continued.

Facing deployment to volatile northeastern Afghanistan, he applied for conscientious objector status in June, saying that he had embraced a pacifist interpretation of Islam. He also hired a civilian lawyer and sent his Canadian wife to live with family in Ontario in case he faced retribution.

"I started wanting to get on a good footing with God," Abdo said in a phone interview. "Just making sure that I was ready to die, so that if something happened I wouldn't burn in hell."

Earlier this month, he submitted the final paperwork for his application, after an investigating officer recommended that it be approved.

The officer found that Abdo's initial doubts about the military could be traced back to three things: that he had been unable to fast during Ramadan, that he was prevented from praying five times a day, and that he was harassed by other soldiers for being a Muslim.

A spokesperson at Fort Campbell, where Abdo is stationed, could not confirm details about his case due to federal privacy laws but said the base has received no other complaints of religious discrimination "in recent years."

"The military doesn't stand you up in a line and make you state your religious beliefs publicly," Kelly Dewitt told CTV.ca, adding that a service member's faith "typically isn't an issue unless you make it an issue, sort of like in the civilian workplace."

The largest military installation in the world with some 50,000 service members, Fort Hood was the site of a shooting rampage last November in which 13 people were killed and 30 others were wounded, allegedly by a Muslim soldier named Maj. Nidal Hasan.

Klawonn, whose mother is Moroccan, has experienced "ongoing and constant discrimination from an array of soldiers" at the base, he said by phone.

Like Abdo, he said he was prevented from praying and fasting. He had his Quran torn up. Soldiers hurled bottles at him. In the middle of the night someone banged on the door of his barracks and left a note behind that said, in big black letters, "F--k you raghead burn in hell."

He reported the incidents to his commanding officers but he said the harassment persisted, and he was relocated to living quarters off-base for his own protection.

"It's really left me at a crossroads between my faith, my country and my obligation to the United States army," he said.

In response, Klawonn and the MRFF are set to file a lawsuit in federal court in the coming weeks that will outline complaints they would like addressed.

The goal is to have the U.S. military "use their equal opportunity policy," Klawonn said, which he believes they are ignoring. Otherwise, he may follow in Abdo's footsteps and apply to be honourably discharged from the military as a conscientious objector.

The MRFF has launched several lawsuits in recent years, charging that lines between the secular and the religious are becoming blurred in the American armed forces.

A non-profit group, the MRFF bills itself as "the constitutional conscience of the United States military." According to its website, more than 18,000 active service members have complained to the organization about what it calls "spiritual rape."

Mikey Weinstein, the MRFF's president, is a lawyer who has worked as a judge advocate in the U.S. military and as assistant counsel to President Ronald Reagan. Weinstein decided to establish the organization in 2004 after his son, who was an Air Force Academy cadet at the time, said he was facing harassment because he was Jewish.

In Klawonn's case, the foundation alleges that "a pernicious pattern and practice of unconstitutional abuse" exists at Fort Hood and in the U.S. army more widely, Weinstein said in a phone interview.

The pending lawsuit follows a number of recent controversies concerning the role of religion in the U.S. military.

In late October, the Air Force Academy in Colorado Springs released the results of a survey that said 41 per cent of non-Christian cadets had experienced unwanted evangelizing in the past year.

An official military video that was screened to U.S. troops in 2009, and featured NFL Hall of Fame quarterback Terry Bradshaw, suggested that faith in God would help soldiers afflicted by depression to cope, and avoid suicide.

And last January, the MRFF complained that U.S. troops at home and in Iraq were using so called "Jesus rifles" equipped with sights inscribed with coded references to the New Testament.

But at Fort Hood, Klawonn said he is optimistic his situation will improve.

Although authorities at the base declined to comment on his case, Klawonn said they began informing him of steps being taken to address his concerns after the MRFF announced in May that it would be filing the lawsuit.

Cultural and anti-terrorism training at the base -- which had previously conflated Islam with terrorism, according to Klawonn -- was overhauled, and an imam was hired to lead Muslim prayers.

"This is even before the lawsuit has been filed," Klawonn said. "My impression is that things are going to start to change around here."

"All it takes is a couple of people to stand up and say: ‘You know what? This isn't right.'"