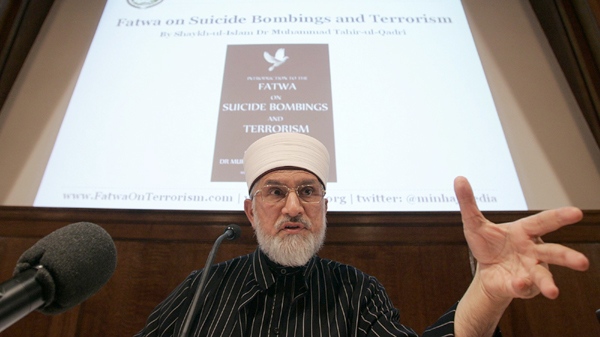 LONDON - A former Pakistani legislator who lives in Canada and leads a global Muslim movement has issued a fatwa, or religious edict, condemning terrorism.

Muhammad Tahir-ul-Qadri says the 600-page fatwa bans suicide bombing "without any excuses, any pretexts, or exceptions."

He is the founder of Minhaj-ul-Qur'an, a worldwide movement that promotes a non-political, tolerant Islam.

A spokesman for the group told The Canadian Press that Tahir-ul-Qadri has been living in southern Ontario for almost four years. The spokesman would not reveal the exact location.

Tahir-ul-Qadri has issued similar, shorter decrees, but Tuesday's event in London was publicized by the Quilliam Foundation, a government-funded anti-extremism think-tank.

The group has hundreds of thousands of followers around the world, most of them in Pakistan or Pakistanis living in other countries.