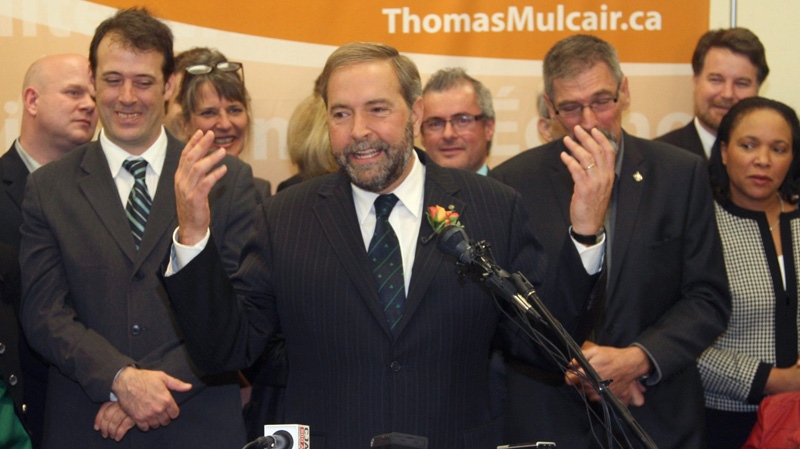 OTTAWA - Thomas Mulcair thinks he's gotten a bad rap, portrayed by his critics as a Quebec nationalist, a fiscal conservative and an interloper in the New Democratic Party.

But the NDP leadership hopeful says that portrait couldn't be further from the truth.

He says he's actually a fiscal moderate and staunch federalist and his values have always been consistent with the social democratic party he's seeking to lead.

"I would place myself firmly in the mouvance (trend) of the NDP and its most traditional values," Mulcair said Tuesday during a wide-ranging interview with The Canadian Press.

Mulcair, a Montreal MP and former Liberal cabinet minister in Quebec, is well known in his home province. But he's still largely unknown to Canadians -- including New Democrats -- elsewhere.

With Quebec accounting for only about two per cent of the NDP's current membership, Mulcair must win over party members outside the province to have any hope of winning the Mar. 24 vote to choose a successor to the late Jack Layton.

He seemed to go out of his way Tuesday to essentially introduce himself, recounting his personal history and challenging some of the falsehoods he says have been spread about him.

"It does sound a bit defensive but when you're being attacked, sometimes you have to explain that," he said.

The opening knock against the mercurial Mulcair was that he's not a team player. He believes he effectively silenced those "anonymous sources" when he formally announced his candidacy, backed by 33 MPs.

But he was surprised when the next line of attack was that he's "not really a federalist."

"You know, I haven't been on the couch watching Quebec politics. I've been literally, physically in the front row, fighting two PQ (Parti Quebecois) governments from '94 to 2003."

He recounted "fighting tirelessly, night and day, to keep Canada together" during the 1995 referendum on Quebec independence.

"So, it always comes as a bit of a surprise, to not say a shock, to hear that questioned."

Mulcair said there's also been an attempt by some to question his social democratic credentials, "people trying to paint me as the guy being on the right of the party simply because I've been in the Liberal party in Quebec, without looking at my actual track record on issues like the environment."

Rival contender Brian Topp has nixed the idea of merging with the Liberals by arguing that New Democrats don't need to become Liberals in order to win government. Mulcair said such comments are "a coded message to the (NDP) base," intended to remind party members that he was a provincial Liberal until joining the federal NDP in 2007.

Mulcair pointed out he had no choice but to be Liberal because that's the only federalist party in Quebec provincial politics, a big tent which encompasses people who vote Conservative, Liberal, NDP and Green federally.

A lawyer by training, Mulcair stressed that he's one of 10 children and has always had to work hard to make his own way in the world. While he's been cast as wanting to loosen the NDP's ties to the labour movement, he pointed out that he did serve for a time as secretary of the union representing Quebec government professional employees.

As for suggestions he's a fiscal conservative, Mulcair acknowledged he gained a reputation as a "tough public administrator" while president of the Office des Professions, which is supposed to protect the public interest in matters involving professional services, such as doctors. He takes credit for making disciplinary hearings more transparent and forcing cases of alleged sexual abuse of patients to be dealt with.

"I have a strong record of rigorous enforcement of statutes in the public interest," he said.

He applied the same principle during his time as Quebec's environment minister, where he said he also proved he can manage budgets. He boasts that he reduced his department's spending each year while simultaneously increasing inspections and enforcement.

"If you ask the machine to cut itself, by pure coincidence, the first thing they always offer to cut is direct service to the public. That's why you need people who actually believe in strong, competent public administration to go after it and say, 'No, we're not going to remove service to the public, there are other economies that can be made,"' he said.

He cited former Manitoba premier Gary Doer and former Saskatchewan MP Lorne Nystrom as role models who've shown they can balance the books without compromising their social democratic values. He lauded the fact that Doer's government reduced the small business tax rate in Manitoba to zero and said he'd reduce taxes for small business as well, although he declined to get into specifics of tax policy for now.

Some of the criticism of Mulcair's federalist credentials has come from Conservatives, although he has not departed from official NDP policy or said anything markedly different than his rival leadership contenders on issues involving Quebec. Mulcair takes that as a sign he's the leadership contender most feared by Prime Minister Stephen Harper.

"The last person the Conservatives want facing Stephen Harper in the House is me and so, for them to be singling me out and trying to attack me on that, showed that I make them nervous."

By his own estimation, Mulcair believes he's best equipped to take on Harper.

An avid hockey player and Nordiques fan, his approach to the game sounds like it could be his political calling card: "Let's just say I've never been shy about going into the corners and I usually come out with the puck."