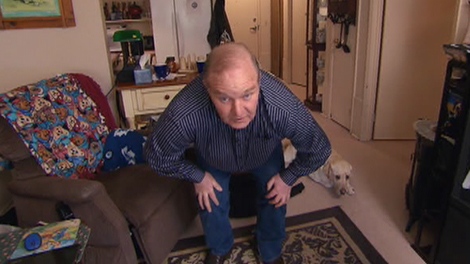 Steve Garvie does a deep knee bend, something he says would have led to him falling over prior to his treatment.

A group of patients with multiple sclerosis gathered on Parliament Hill Tuesday to testify how a controversial new treatment has changed their lives, as two Liberal MPs reiterated their call for more research.

The patients included Steve Garvie and Lianne Webb, both of whom were profiled in a recent report from CTV's W5.

Garvie was diagnosed 10 years ago with secondary progressive MS, which left him using a walker most of the time, suffering profound fatigue.

But since he's had what's been dubbed the "liberation treatment" to open up a blocked left jugular vein in this neck, his life has transformed.

He testified to the parliamentary Subcommittee on Neurological Disease Tuesday that he is now able to stand and walk on his own. He told the MPs that he was once suicidal and needed daily care to wash and cook. Now, he has regained his strength and independence.

Liane Webb, who was diagnosed with relapsing-remitting MS almost 20 years ago, has also been treated for blocked veins, a condition called CCSVI, or chronic cerebrospinal venous insufficiency.

Webb says she hasn't had an MS attack in the four months since her treatment, and her chronic fatigue has disappeared.

"I go golfing three times a week and I don't take the cart," she says. "I am able to go on bike rides and walks after work with my family now that I have the energy."

Dr. Sandy MacDonald, the Barrie Ont. doctor who helped diagnose and treat Garvie and Webb, told the committee that the balloon angioplasty used in the liberation treatment is a safe, relatively easy procedure for what he is finding is a common condition.

Liberal public health critic Dr. Carolyn Bennett and health critic Dr. Kirsty Duncan called for the Harper government to invest in MS research, diagnosis and treatment, and to immediately convene a meeting of provincial and territorial health ministers to discuss a national approach to funding MS and other diseases of the brain.

"We support the call by the MS Society of Canada and thousands of MS patients across the country who want the Harper government to provide $10 million for research into MS and its potential cause," Duncan said in a news release.

Drs. Duncan and Bennett wrote a letter to Health Minister Leona Aglukkaq on May 6 asking for support to research the "liberation treatment." Aglukkaq has yet to respond.

Dr. Duncan has also called for an emergency debate in the House of Commons on this issue, but so far those calls have been rejected.

"Liberation treatment centres are popping up daily around the world, and Canada, with one of the highest rates of MS in the world, should be on board," Duncan said. "MS patients and neurologists all agree that well-designed clinical trials must take place as soon as possible."

MS patients have organized numerous petitions calling on the government to fund liberation procedures, and hundreds of patients gathered for a rally on the Hill last month. Bennett noted that a number of MS patients are going overseas for treatment for CCSVI, at their own expense.

"What does this mean for a family who simply does not have the financial resources to do so? We believe that, just as heart patients are treated for blocked arteries, MS patients should also have access to this treatment," Bennett said in a statement.