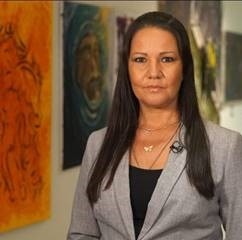 With a career in journalism that has spanned more than 20 years, Donna Sound is a reporter for CTV NATIONAL NEWS based in Toronto, delivering breaking news stories and contributing to the newscast’s Indigenous Circle segments.

An award-winning journalist, Sound began her career as an associate producer at CBC News before moving in front of the camera in 2002 as a correspondent for APTN. She went on to work as producer and sole anchor for two daily national newscasts for APTN at their headquarters in Winnipeg. Sound has covered many protests on the front line, including the G20 and Caledonia, and has interviewed Prime Ministers, heads of state, Lieutenant Governors, OSCAR® winners, music icons, and CEOs.

A member of Sagamok Anishnawbek First Nation in Ontario, Sound feels a sense of pride in breaking down barriers for First Nation people. She brings a distinct perspective to the newsroom, giving a voice to those not often heard in Canadian media.

Throughout her childhood, it was Sound’s dream to work as a journalist, and she views journalism as having “a front seat to the world.” A graduate of Humber College’s Journalism – Print and Broadcast program, she gives back by regularly conducting speaking engagements in classrooms for high school and university students.

Sound has a passion for her Ojibway culture and its language. She continually learns to speak Ojibway, and speaks English.