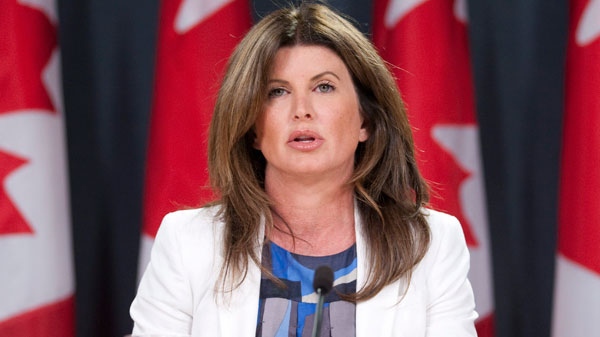 Minister of Public Works and Government Services and Minister for Status of Women Rona Ambrose speaks during a news conference in Ottawa, Thursday August 4, 2011. (Adrian Wyld / THE CANADIAN PRESS)

OTTAWA - The federal minister for the Status of Women says she's concerned complacency is getting in the way of ending violence against women on college and university campuses.

In the last two months alone, women have reported being followed into washrooms, assaulted in a tunnel and grabbed by someone hiding in the bushes at separate schools across Canada.

It's a reality check, Rona Ambrose said in an interview Friday.

"Yes, there are good programs out there being offered by institutions like universities and colleges but we need to do more," Ambrose said.

"The problem continues to exist and I think students are well positioned to come up with good ideas."

So the government is now going directly to student groups to ask for ideas on how they can end violence against women on campus.

The government will accept proposals until January 27 for projects that cost under $200,000. There's no limit on the number of proposals which could be approved.

The money is locked in; Ambrose said no funding related to the issue of violence against women is on the chopping block as the government seeks to shave $4 billion in spending a year.

And according to the 2004 General Social Survey, more than half of sexual assault incidents occur in a commercial or institutional establishment.

A spotlight on sexual violence on campuses was cast with the revelation that a football coach at Pennsylvania State university had been assaulting young boys for decades.

"I think one of the things that concerns me the most is complacency in large institutions. We saw that with something very recent with Penn State university," Ambrose said.

Students at Carleton University have waged a four-year battle with their school to get a properly established sexual assault centre.

Currently, the Coalition for a Carleton Sexual Assault Centre runs a cellphone-based hotline but says there's a demand for increased services, including peer counselling and outreach.

In the last month alone there have been three attacks on women, said Julie Lalonde, the centre's co-founder.

The person arrested in two of the attacks was also a Carleton student, she said.

The university has said it offers a range of services through its health centre for assault victims and has been working with Lalonde's group to find a dedicated space.

The announcement of the call for proposals from the federal government came in conjunction with the international day for the elimination of violence against women.

"In a country as well-off as ours, there is no excuse for allowing so many women to be targeted because of their gender," NDP Leader Nycole Turmel said in a statement Friday.

"Today is also a day to recommit ourselves to protecting women and girls. Gender violence scars us all and hurts our societies in ways that cannot be measured."

The proposal period includes Dec. 6, Canada's national day of remembrance and action on violence against women -- a time of year when the issue is likely to be high on the public agenda.

It was on Dec. 6, 1989 that a gunman burst into the Ecole Polytechnique in Montreal and killed 14 women.

Given that violence against women is an issue that long predates even 1989, Lalonde said she doesn't know why the federal government is offering to fund student groups now, but the timing doesn't matter.

"We're hoping that they see a flood of applications and realize, OK, we've really struck a nerve and this is something we need to be paying attention to," she said.