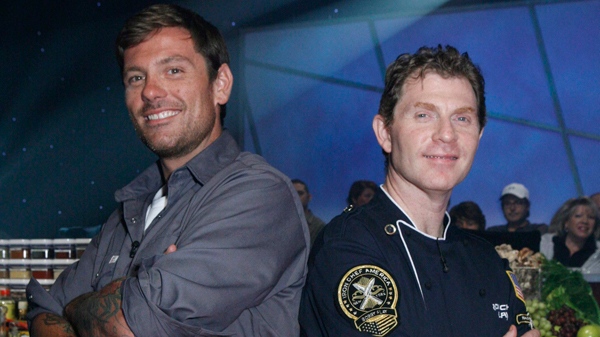 TORONTO - Montreal chef Chuck Hughes was torn when he saw Canadian lobster was the secret ingredient he had to use in his "Iron Chef America" battle against culinary superstar Bobby Flay.

While lobster is a staple at his restaurant, Garde Manger, and he has a big tattoo of the crustacean on his forearm as a testament to his love for it, he also felt it could ruin his reputation if he lost the battle.

"When they said, 'Lobster,' I'm like: 'Oh my God, are you serious?"' Hughes, the charismatic star of TV's "Chuck's Day Off," recalled in an interview.

Thankfully, no amputation was necessary.

As viewers saw Sunday when the episode debuted on Food Network Canada, Hughes beat Flay by a score of 45-41 to become just the second Canadian chef to emerge victorious in Kitchen Stadium. Vancouver's Rob Feenie was the first, defeating Iron Chef Masaharu Morimoto in 2005.

Hughes, 34, is also the first Canadian to beat the illustrious Flay and is the youngest Canuck and first Quebec chef to compete on the show.

"Now I feel like the pressure is on even more," said Hughes, who had to keep his victory a secret until the episode aired here (it was broadcast in the U.S. earlier this year).

"It's almost like now you need to live up to the fact that you won."

Hughes said he's also received a lot of interest from people in the U.S. since the episode aired there.

"The response to that has been unbelievable.... It's definitely been a super positive experience for us."

Hughes and his two sous chefs from Garde Manger, Jean-Francois Methot and James Baran, went into the hour-long cooking showdown against Flay and his team last July in New York City.

Canadian viewers were no doubt elated to see Hughes make poutine, the fries, gravy and cheese curd dish that originated in Quebec.

The problem, he said, was that the only cheese curds that were available in the Kitchen Stadium pantry were from New York and weren't nearly as good as the ones they use in Quebec.

"It's basically cheddar that they've kind of made to look like curds. It wasn't like the authentic, squeaky, chewy, delicious curds that we're used to in Quebec," he said.

Hughes, who makes lobster poutine, lobster rolls and lobster risotto at his restaurant, said he felt he had no choice but to go with poutine.

"It's definitely not what you would think for 'Iron Chef,' but I couldn't go there and not do it."

Hughes said the judges also felt that his first dish, the Caesar cocktail, had too much vodka in it. The early negative feedback made him discouraged and put him in a "downward spiral," he said.

Toronto native Kevin Brauch, the show's "floor reporter" who also hosts the series "The Thirsty Traveler," noticed Hughes was down and pulled him aside for a pep talk before he presented his third dish.

"He's like: 'Dude, what are you doing? Get up there and own that. You tell them. You tell them what's good,"' said Hughes. "He lifted my spirits."

Hughes said Flay also seemed to have problems during the battle.

"Honestly, I think it went really badly on Bobby Flay's side that day, which had a lot to do with us winning as well. I couldn't really see what was going on but I could hear a lot of yelling," he said.

"I could hear him telling his sous chefs: 'No, this is no good, redo this."'

Hughes was also feeling the heat and had to change his sweaty shirt during the battle.

His sous chefs, he said, were "absolutely amazing under the pressure," and the victory created a special bond between them.

"I never even went in thinking that we might possibly win. I just wanted to perform. For us, putting up five dishes that we were proud of and five dishes we could stand behind, that was winning for us," he said.

"Everything else is just gravy."