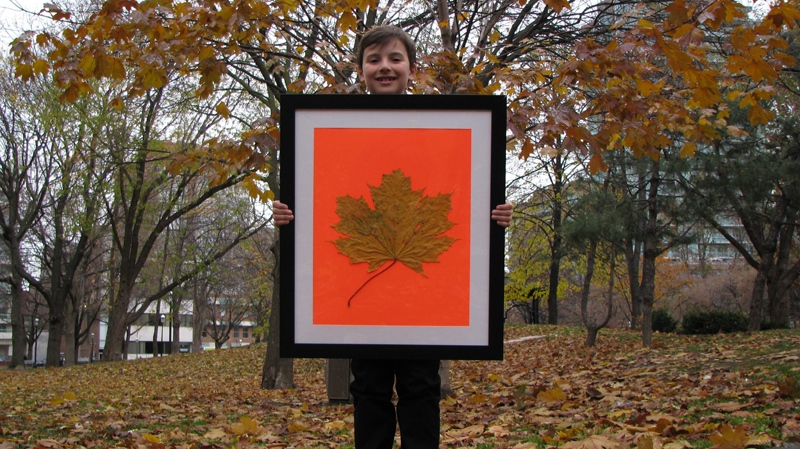 Nine-year-old Joseph Donato, of Pickering, Ont., shows off the giant maple leaf in a Toronto park on Thursday, Oct. 18, 2010 that he picked up on his way home from a park last month. Without the stem, the leaf measures more than 34 by 29 centimetres, bigger than some serving platters. (Graeme Roy / THE CANADIAN PRESS)

TORONTO - Here's one record that may prove to be short-leaved.

Nine-year-old Joseph Donato of Pickering, Ont., recently got the nod from Guinness World Records for having the largest maple leaf.

The leaf, which he found in a park last month, measures 34.61 centimetres wide by 29.21 centimetres long, not including the stem.

But within days of Joseph's record being announced, others stepped up with claims of bigger, wider leaves.

That leaf was reportedly found between the graves of Alexander Muir, composer of "The Maple Leaf Forever," and former prime minister William Lyon Mackenzie King.

Meanwhile, 10-year-old Eve Steel of Vancouver has reported finding a gargantuan leaf that measures about 44 by 34 centimetres.

Carey Low, a Canadian adjudicator for Guinness World Records, says it's "exciting" that so many people are getting into the spirit of world records -- setting them and breaking them.

Low says Joseph's leaf established the record, since the category of biggest maple leaf didn't exist before. Now, anyone who wants to challenge the record must contact Guinness through its website and go through a submission process that takes several weeks.

"As soon as there is an established record, people look at that -- whatever if might be -- and say: 'We could beat that, I can beat that,'" Low said Monday.

Low added that he finds it "quite amazing that in what's been five or six days since Joseph's leaf was announced as the Guinness World Record, that there's been this many other people who have found leaves that apparently are as big or bigger."