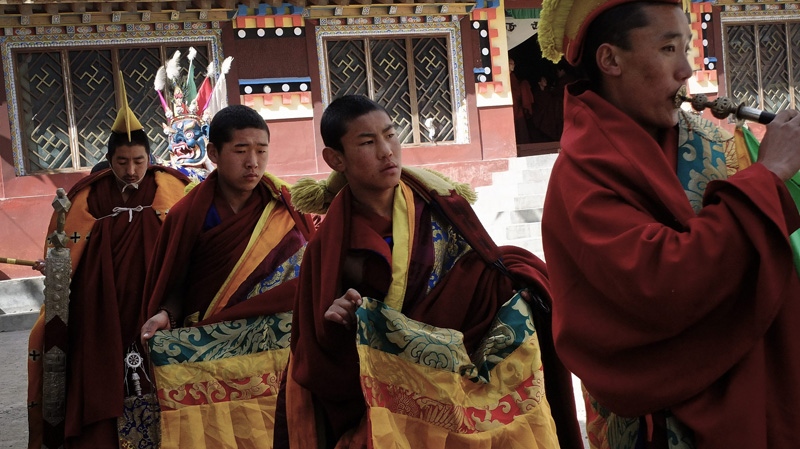 In this photo taken Tuesday, Feb. 7, 2012, Tibetan monks perform a religious ceremony at a monastery in Jiuzhaigou, in northwestern China's Sichuan province. Sichuan province's Aba prefecture has been the scene of numerous protests over the past several years as well as recent surges of dramatic demonstrations against the Chinese government. (AP Photo/Andy Wong)

BEIJING - A Tibetan monk set himself on fire in western China and was beaten by security forces as they put out the flames, a rights group said, marking the latest in a series of dramatic protests against China's handling of its vast Tibetan areas.

Responding to spiraling unrest in Tibetan areas, Premier Wen Jiabao on Tuesday defended China's policies on Tibet, saying the government respects traditional culture and freedom of religious belief. He said China has invested heavily in Tibet and will continue to do so.

He also said attempts to undermine stability by inciting monks was counter to the interests of Tibetans.

Activist groups say the self-immolations are a protest against China's policies and a call for the return of the Dalai Lama, the Tibetans' exiled spiritual leader.

The Chinese government has condemned the self-immolations and says an upsurge in violence in Tibetan areas, including some deadly clashes between Tibetan protesters and security forces, are being instigated by forces outside the country wanting to separate Tibet from China.

"Any attempt to incite a small number of monks to take radical moves to undermine stability in the Tibet Autonomous Region is not in the interest of development in Tibet or the interests of the people living in Tibet," Wen told reporters at a joint press conference with visiting leaders from the European Union. "Such attempts can have no popular support."

While Wen focused his comments on Tibet, much of the recent unrest has occurred in adjoining provinces with large Tibetan populations, particularly Sichuan.

In Sichuan's Aba prefecture on Monday afternoon, Lobsang Gyatso, a 19-year-old monk from the Kirti monastery set himself ablaze on the main street, the London-based International Campaign for Tibet said.

Security forces beat Gyatso while extinguishing the flames, then took him away, the group said in an online statement posted late Monday. It was not immediately clear whether he survived.

The official Xinhua News Agency on Tuesday also reported the immolation, identifying the monk as 18-year-old Losang Gyatso. It said "police rushed to put out the fire and sent him to a local hospital," citing a spokesman for the county government whose name was not provided. It gave no information about his condition.

Aba prefecture has been the scene of numerous protests over the past several years against the Chinese government. Most are led by monks who are fiercely loyal to Tibet's exiled Buddhist leader, the Dalai Lama, who fled the Himalayan region in 1959 amid an abortive uprising against Chinese rule and is reviled by Beijing.

According to ICT, 20 Tibetan monks, nuns and laypeople have set themselves on fire in China over the past year, with at least 13 dying from their injuries. The self-immolations have occurred with increasing frequency in recent weeks, and most have taken place in Sichuan's remote and mountainous Tibetan areas.

An official with the local Communist Party's propaganda department in Aba said he was unaware of the latest case. He referred media to China's official Xinhua News Agency or the Foreign Ministry for reports about self-immolations, saying that only they were authorized to release such news.

Like many Chinese bureaucrats, the official would give only his surname, Bai.

A duty officer with the Foreign Ministry said she would look into it but had no immediate information to share.

Western reporters trying to visit that part of Sichuan have been turned away by security forces.

China says Tibet has always been part of its territory, but many Tibetans say the region was virtually independent for centuries and that Beijing's control is draining Tibetan culture.

Another overseas rights group, Free Tibet, said in a statement late Monday that around 200 Tibetans protested in a public square in neighbouring Qinghai province's Yushu prefecture on Saturday and were surrounded by security forces, with some protesters reportedly detained. A second protest followed on Sunday, and Free Tibet quoted locals it did not identify as saying the situation in the town was very tense.

U.S.-funded broadcaster Radio Free Asia said Tuesday that a 21-year-old Tibetan, Tashi Palden, was detained in Sichuan's Ganzi prefecture on Saturday after a poster appeared on the wall of a local police station warning that three Tibetans were preparing to self-immolate. It didn't say if Palden was suspected of putting up the poster. RFA said he was detained while shouting slogans in the town centre calling for Tibetan independence.

The broadcaster cited local sources in Ganzi who spoke on condition of anonymity.

RFA also said an advocate of Tibetan songs and other traditional culture who worked as a civil servant in Tibet's Naqu prefecture was detained by police last week, citing a source inside Tibet who spoke on condition of anonymity. The broadcaster said Dawa Dorje was detained upon return to Tibet from Sichuan, where he urged a conference of singers to promote Tibetan language and culture through their music.