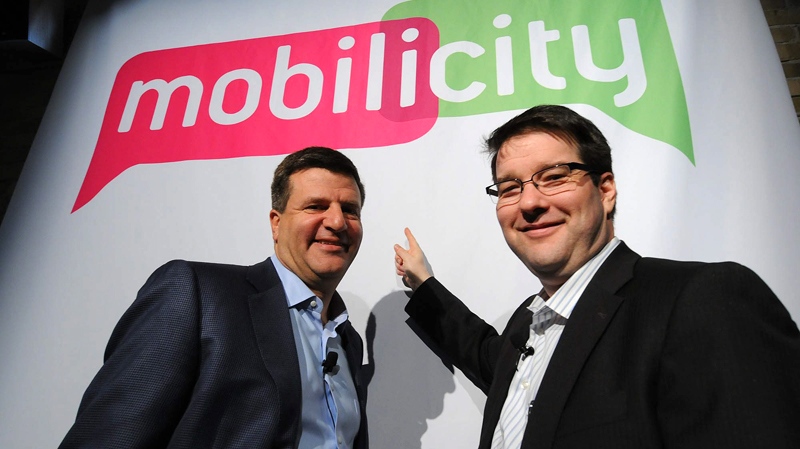 "I didn't launch this business to be dealt an underhanded card by someone who's much bigger," Mobilicity chairman John Bitove said Friday, adding that his company plans to pursue legal action under the Competition Act if Rogers launches Chatr as it announced June 30.

Bitove said the timing of Chatr's launch is no coincidence, Rogers having had years to introduce a discount service but choosing to do so only now that Mobilicity has entered the market.

"What they're basically being is a $20-billion bully to try and destroy the competition as quickly as they can."

Mobilicity was one of the new competitors that emerged after the federal government sold additional spectrum -- the radio frequencies used to carry wireless messages -- in a 2008 auction that raised $4.25 billion for Ottawa.

Part of the available spectrum was set aside for newcomers, as part of the government's goal of promoting competition in Canada's wireless industry -- which had been reduced to three national players after years of takeovers.

Rogers acquired the Fido service and its customers when it bought Microcell Telecommunications, which had challenged the larger players with a low-price strategy. Prior to that, Telus acquired Clearnet Communications and combined it with Telus Mobility.

Chatr is set to join Rogers Wireless and Fido as the third wireless service offered by Rogers Communications Inc. (TSX:RCI.B).

The company wouldn't say Friday when it plans to launch the service other then "when it is ready," said John Boynton, executive vice-president and chief marketing officer at Rogers.

However, Boynton denied Bitove's allegations as to his company's motives, saying the idea of providing a low-cost service to those with below average incomes had been pioneered not by Mobilicity but wireless carriers in the United States like MetroPCS and Leaf.

Rogers has been watching the progress of those American companies and decided it was time to "fill that customer need," he said

Ask if Chtr would be subsidized operation, Boynton described Chtr as a separate division within Rogers with its own staff and profit and loss statements, and one that would, like any other startup, begin with no customers and try to attract as many as it can.

"It's all about competition," Boynton said.

Bitove -- who also heads up the Priszm Income Fund, operator of most of Canada's KFC, Taco Bell and Pizza Huts -- claimed Rogers would have to subsidize the new service and is launching it only to stifle new competition.

"The only reason you'd subsidize is to kill the competition. This is not a practical business plan," Bitove said at a news conference.

Mobilicity said it will file a complaint with the Competition Bureau alleging that Rogers has contravened the "abuse of dominant position" section of the Competition Act, which disallows the "use of fighting brands introduced selectively on a temporary basis to discipline or eliminate a competitor."

Bitove said he believes that Rogers will eliminate the discounts once it has driven Mobilicity out of the market, citing Canada's largest wireless service's earlier move to buy smaller discount carrier Fido in a bid to stifle competition.

The Competition Bureau examines whether there is evidence that a behaviour is having an adverse effect on the marketplace in order to determine whether there has been an abuse of dominance, said its spokesman Greg Scott. He said he could not comment on whether the bureau was investigating this case.

"There are certain marketing practices that might raise questions from the point of view of the rival company, but we clearly need to look at all of the issues before we can make a determination as to whether there is any anti-competitive behaviour," Scott said.

Telecom analyst Iain Grant believes Mobilicity has a strong case against Rogers under the Competition Act, given the timing of the launch and the language Rogers has been using in introducing the brand.

Many incumbents have so-called flanker brands or "fighting brands," including Telus's Kodoo and Bell's Solo and Virgin Mobile, which launched a few years ago.

"The difference is when you do it and how you do it," Grant said. "This is almost a perfect example of what the act was trying to (prevent)."

"Now, when Mobilicity and Public Mobile and Wind poke their heads up with their new competitive plans, if you introduce your flanker brand at that time, you might be thought to be a little opportunistic."

Grant believes Mobilicity decided to announce its plans in advance to delay Rogers' launch by weighing it down in legal wrangling and buy itself time to sign up more subscribers.

"For Canadians, the benefits to us are that we are getting a much more interesting, much more vibrant marketplace," he added.

Bitove argued that Chatr is a way for Rogers to compete with it without having to bring down prices for about 8.5 million current customers.

"They're not repricing their whole base, they're just trying to create a certain segment to go after us in a targeted fashion."

He said Rogers has a cozy connection with handset providers and has already flexed its muscle to limit availability for others.

Meanwhile, Mobilicity has already retained legal counsel and could pursue other legal actions, including a possible civil lawsuit, he said.

Mobilicity launched its advanced wireless network in the Greater Toronto Area in May, one of several new companies that have launched wireless services in recent months.

The company, which targets Canada's urban ethnic communities with unlimited international calling, also plans to be up and running in Vancouver, Edmonton, Calgary and Ottawa later this year.

Mobilicity competes with the big three established players and new cellphone entrants like Globalive's Wind Mobile, the first new wireless players in Canada's cellphone industry in about a decade.

Public Mobile is another recent new entrant and Quebecor's (TSX:QBR.B) Videotron will also launch its new wireless business in Quebec and eastern Ontario later this year, delaying a planned summer launch, while Shaw Communications (TSX:SJR.B) has said it will launch in late 2011.