Woman forced to remove hijab in jail settles for US$120,000 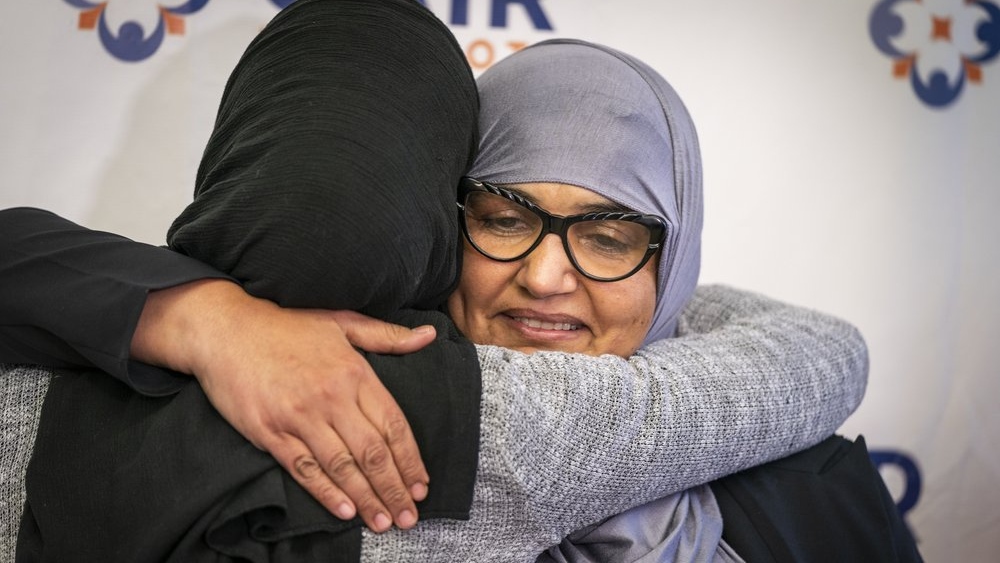 Aida Shyef Al-Kadi, right, of St. Louis Park, got a hug from Asma Mohammed, advocacy director at Reviving the Islamic Sisterhood for Empowerment, after a press conference at CAIR-MN headquarters in Minneapolis on Tuesday, December 17, 2019. (Leila Navidi/Star Tribune via AP)

MINNEAPOLIS -- A Minnesota Muslim woman has received US$120,000 to settle her lawsuit alleging she was forced to strip in jail and remove her hijab for a booking photo over a traffic offence, the woman and her attorneys said Tuesday.

Aida Shyef Al-Kadi, of St. Louis Park, appeared with her attorneys at the Minneapolis headquarters of the Council on American-Islamic Relations to announce the settlement approved last month by U.S. District Judge John Tunheim.

Al-Kadi, 57, said her treatment at the Ramsey County jail in August 2013 was “one of the most humiliating and harmful experiences”of her life.

“I knew that I did not want any other Muslim woman to experience what I did,” she said.

A judge had issued a warrant for Al-Kadi's arrest after she missed a court hearing over a traffic offence while taking her daughter to the hospital, the Star Tribune reported.

Under the settlement, the jail has put in place specific rules about how to accommodate inmates with religious headwear when taking booking photos. The county also agreed to destroy all hard copies and delete any electronic copies of Al-Kadi's booking photo.

The settlement does not require the county to admit wrongdoing.

“We believe that this settlement agreement is fair and in the best interests of all of our residents. Ramsey County's values hold that the rights, beliefs, well-being and dignity of all our residents are protected and honoured in all aspects of what we do. The practices outlined in the agreement to improve the booking process for those with religious head coverings better reflect these values,” Ramsey County Board Chair Jim McDonough said in a statement Tuesday.

In her lawsuit, Al-Kadi's argued that the county violated her constitutional rights and discriminated against her for her religious beliefs.

Al-Kadi was born and raised in Ohio. She moved to Minnesota in 2005 so her daughter could receive specialized medical care.

When Al-Kadi turned herself in, she said was told to remove her hijab and abaya, a long dress that covered her body, in front of male jailers. When she objected, she said she was removed from the area and taken to a holding cell, where she removed her hijab in front of a male jailer.

She said she agreed to remove her headscarf for her booking photo after being told that the photo would never be released to the public. But months later, she found it on a third-party website that charges users to take down the photos.

After taking the photo, officers gave her a bedsheet to use as a hijab. Al-Kadi eventually was told to remove her abaya and change into a jail uniform, while two female officers watched her. Ramsey County policy says that misdemeanour inmates such as Al-Kadi “will not be viewed without clothing,” according to court records.

In 2014, the county revised its jail policies to include that inmates who wear hijabs will not be forced to remove them in front of men. A facility-approved hijab will be provided. Sheriff spokesman Roy Magnuson said bedsheets are no longer used.