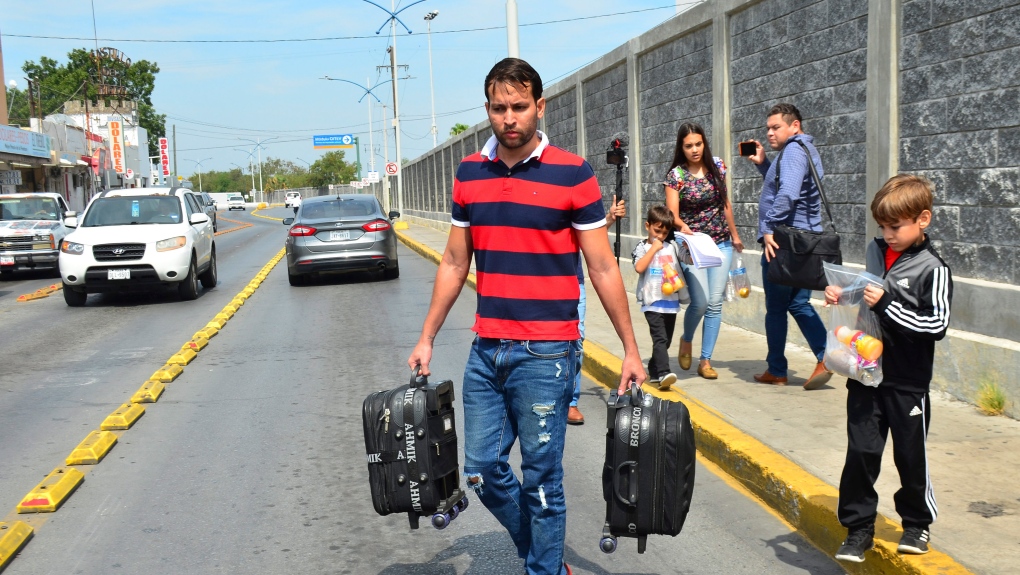 The Ascencio family, from Venezuela, carry their luggage after being returned by U.S. authorities to Nuevo Laredo, Mexico as part of the first group of migrants to be sent back to Tamaulipas state under the so-called Remain in Mexico program for U.S. asylum seekers, Tuesday, July 9, 2019. Approximately 10 migrants crossed the border Monday to seek U.S. asylum and were sent back on Tuesday to wait as their applications are processed. (AP Photo/Salvador Gonzalez)

NUEVO LAREDO, Mexico -- A U.S. policy to make asylum seekers wait in Mexico while their cases wind through clogged U.S. immigration courts expanded to a fourth Mexican border city Tuesday with the arrival of a first group of migrants to the violent city of Nuevo Laredo.

The 10 migrants crossed the border to seek U.S. asylum Monday and will now have to wait in Mexico as their applications are processed.

Lucia Ascencio of Venezuela had waited for three months in Nuevo Laredo with her husband and two young sons just for the chance to make her asylum petition in Laredo, Texas. She was stunned by her return to Mexico as they walked from the bridge carrying plastic bags containing a bottle of water, a bottle of juice and an orange.

"We hadn't thought that they were going to send us back," she said. Her family was given a date in September to return for the next step in their process.

A spokeswoman with Mexico's immigration agency confirmed that the first group of 10 returned Tuesday under the program, which is formally known as the Migrant Protection Protocols.

U.S. Department of Homeland Security officials did not immediately comment.

Nuevo Laredo marks the first new city for the policy since U.S. and Mexican officials struck an agreement on June 7 that called for its immediate expansion. Extending what U.S. officials name the "Migrant Protection Protocols" policy was a key piece of the accord to stave off President Donald Trump's threat of tariffs to see if new measures reduced the flow of migrants.

U.S. officials announced Tuesday that the number of arrests and people stopped at the Mexican border dropped 28% in June compared to May to 104,344. That decrease was 11 percentage points more than the same period in 2018, suggesting that it was more than the usual summer decline.

"We are working with the government of Mexico to expand Migrant Protection Protocols to allow the U.S. to more effectively assist legitimate asylum-seekers and individuals fleeing persecution and deter migrants with false or meritless claims from making the journey," the Department of Homeland Security said.

Asylum applicants who arrived as families were previously released into the U.S. with notices to appear in court.

The program was introduced in the Mexican border city of Tijuana in late January and extended to Mexicali and Ciudad Juarez. More than 18,000 mostly Central American migrants had been returned to those cities through the first week in July, according Mexican officials.

Asylum seekers have struggled to find legal advice in Mexico and critics have assailed the policy for exposing asylum seekers to violence. Nuevo Laredo is in Tamaulipas state, which the U.S. State Department warns Americans not to visit due to kidnappings and other crimes.

The state is notorious for violent drug cartels that have controlled its border cities. But its long shared border with Texas also includes the busiest sector for U.S. Border Patrol's migrant apprehensions.

Migrant shelters in cities along Mexico's northern border have been swamped for months. Like Ascencio, migrants who want to apply for U.S. asylum wait for months to get the opportunity. The Remain in Mexico cities are even more affected because the migrants are sent back to wait for a process that could last more than a year.

At the Casa AMAR migrant shelter in Nuevo Laredo, director Aaron Mendez said there was already a "humanitarian crisis" that the shelter lacked the resources to deal with.

"If they could have 50 shelters here in the city it still wouldn't be enough," Mendez said. Authorities had originally said 150 to 200 migrants could be returned to Nuevo Laredo daily.

The federal government has pledged to assist border cities in accommodating the migrants, but details have been few and local shelters complain that the new government of President Andres Manuel Lopez Obrador has actually cut funding that they had received to support migrants. Ebrard said they had arranged with 16 shelters to provide places for migrants to stay, but that would only meet a fraction of the need.

Several civil rights organizations in the U.S. have sued the government over the Migrant Protection Protocols, but an appeals court allowed the policy to remain in effect during a legal challenge.