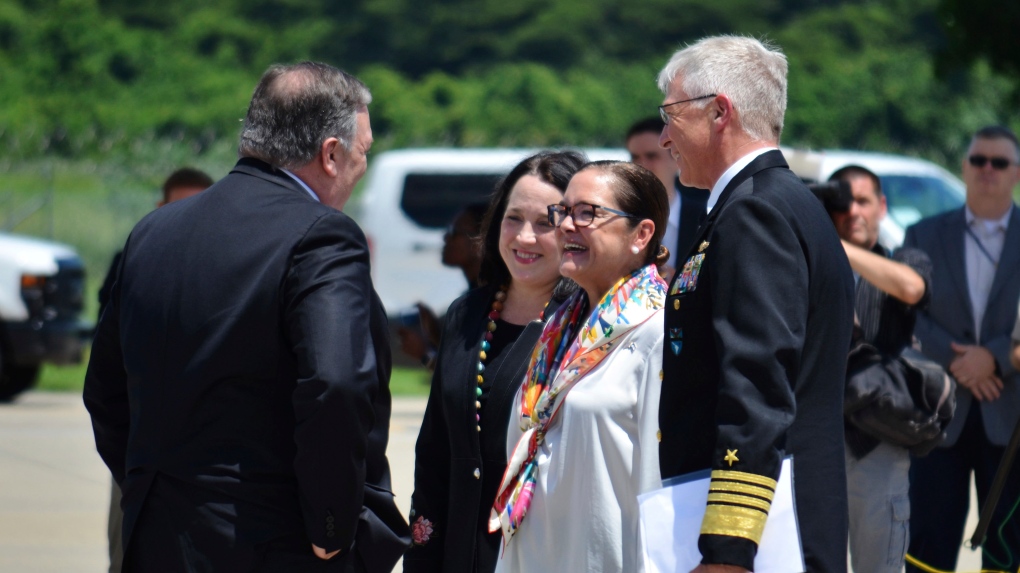 MEXICO CITY -- U.S. Secretary of State Mike Pompeo acknowledged Sunday that Mexico has made progress on migration enforcement, while expressing hope that El Salvador can stem the tide of migrants north from that Central American country.

Pompeo spent the morning with Mexican Foreign Secretary Marcelo in Mexico City before flying to a meeting with El Salvador's president.

Ebrard said in a statement that Pompeo noted "significant" advances in Mexico's efforts to curb migration. Record numbers of migrants, especially Central Americans, have made their way through Mexico in recent months in an effort to start new lives in the U.S.

Given the advances, Ebrard said Mexico sees no need to negotiate a "safe third country" agreement with Washington that would require migrants to apply for asylum in Mexico rather than in the U.S.

During the meeting, she said, Pompeo thanked Ebrard for Mexico's "increased immigration enforcement efforts, which initial indications suggest is leading to reduced flows of illegal immigrants arriving at the U.S. southern border."

The U.S. Department of Homeland Security reported a 28% drop last month in the number of migrants encountered by Customs and Border Protection at the U.S.-Mexico border compared to May.

Some attribute the decrease to increased enforcement in Mexico, combined with the country's participation in a program that sends asylum seekers back into Mexico to await the outcome of their claims in the U.S.

The meeting between Pompeo and Ebrard came at the halfway point of a 90-day span during which Mexico has agreed to reduce migration across its territory toward the U.S. border as part of a deal that headed off stiff tariffs on Mexican goods threatened by U.S. President Donald Trump.

Since then, Mexican officials say they have increased migration enforcement along the southern and northern borders, while deporting hundreds of Central Americans each week by plane.

On other matters, Ortagus said the ministers discussed the new North American free trade agreement. The Mexican Senate approved the deal in June, but Democratic legislators in the U.S. have threatened to block it.

And the foreign ministry said Ebrard suggested that the U.S. and Mexico work together to recover the assets of Mexican drug lord Joaquin "El Chapo" Guzman, who was sentenced to life in prison in the U.S. last week.

Mexican President Andres Manuel Lopez Obrador said Thursday that the money is Mexican and that he will seek its return to the country, through court action if necessary.

The foreign ministry said Ebrard also asked for help to stem the flow of weapons trafficked into Mexico from the U.S.

As the motorcade carrying Pompeo departed, a lawyer for Guzman jumped in front of a vehicle with a hand-painted sign that read: "Chapo's Money, No USA, Yes Mexico."

The driver of a black Suburban tapped Guzman's lawyer three times with the SUV's front grill before a Mexican official pulled the lawyer away.

Speaking to reporters, lawyer Jose Luis Gonzalez said Guzman wants his money to be distributed among Mexico's poor, rather than confiscated by the U.S. government. The lawyer is also fighting for Guzman's extradition back to Mexico.

Pompeo arrived in El Salvador later Sunday for a meeting with President Nayib Bukele, who agreed to co-operate on counter-narcotics efforts.

Speaking to reporters after the meeting, Bukele said he would rather receive U.S. investment and assistance in fighting criminal groups than aid.

El Salvador, Guatemala and Honduras make up Central America's so-called Northern Triangle, the source of most of the wave of migrants and asylum seekers who have sought to make it to the United States this year, to escape violence and poverty back home.

"We want to improve the conditions" in El Salvador, Bukele said.

Bukele suggested the countries work together to fight the MS-13 gang, which is active in both El Salvador and the U.S.

"We want people to stay here," said Bukele. "That should be our goal."

Pompeo described Bukele as a force for change and expressed optimism that that he can sway attitudes on outward migration. Bukele took office in June.

"This is a country that can be a model on immigration," Pompeo told reporters.