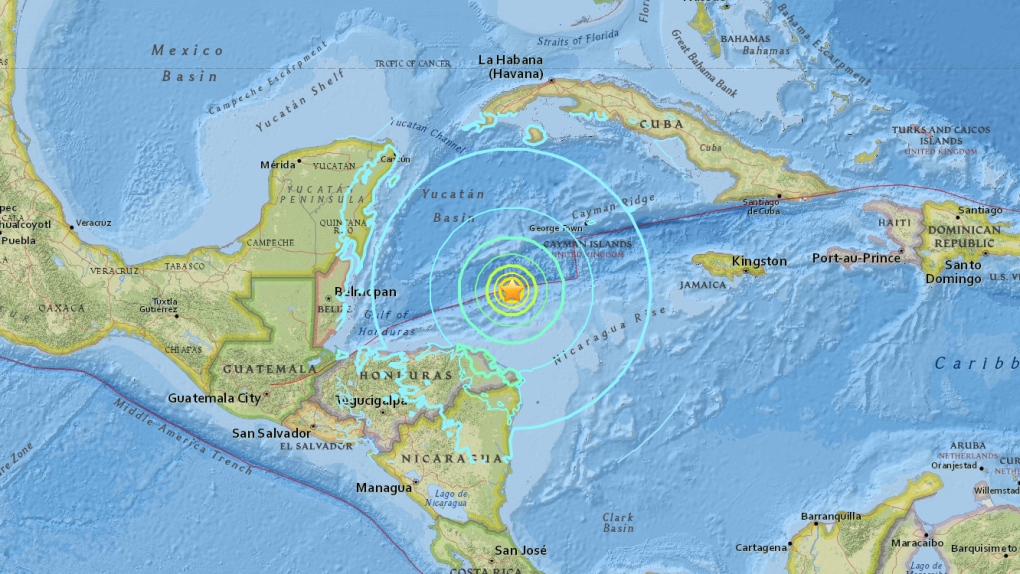 The location of a 7.6-magnitude earthquake is shown on the USGS website.

TEGUCIGALPA, Honduras - A magnitude 7.6 earthquake struck in the Caribbean Sea between the coast of Honduras and the Cayman Islands on Tuesday night, shaking the mainland and causing officials to briefly post advisories warning of the threat of possible tsunami surges around the region.

There were no early reports of serious damage on land. Officials in Honduras said shaking was registered across much of the Central American nation and there were some reports of cracks in homes in Colon and Atlantida provinces along the northern coast and Olancho in eastern Honduras.

Tsunami warning centres initially issued advisories stressing that people in Puerto Rico, the Cayman Islands, Cuba, Jamaica and other Caribbean islands as well as on the coasts of Mexico and Central America should aware of the tsunami danger. The Pacific Tsunami Warning Center said later that the advisories had been cancelled.

The U.S. Geological Survey measured the quake at a preliminary magnitude of 7.6. The tremor struck in the sea about 202 kilometres north-northeast of Barra Patuca, Honduras, and 303 kilometres southwest of George Town, Cayman Islands. The tremor occurred about 10 kilometres below the surface.

The northern coast of Honduras closest to the quake's epicenter is sparsely populated, with much of it covered by nature reserves. The tremor was about 44 kilometres from Honduras' Swan Islands, which are unpopulated except for small navy post.

President Juan Orlando Hernandez via Twitter said that Honduras had activated its emergency system and asked people to remain calm.

In the Cayman Islands, Sgt. Dave McKay with Royal Cayman Islands Police told The Associated Press that hazard management officials had not issued a tsunami alert but authorities were monitoring the situation.

Hector Pesquera, Puerto Rico's public safety secretary, said that authorities were monitoring the coastlines of 46 municipalities on the U.S. territory and that police were patrolling certain areas as backup.

"It's important that people do not go into the water and stay away from the shoreline," he said, adding that heavy currents could be felt up until dawn on Wednesday.

He said there were no plans to evacuate anyone.