Trump rallies Republicans in Nevada on eve of Democratic vote 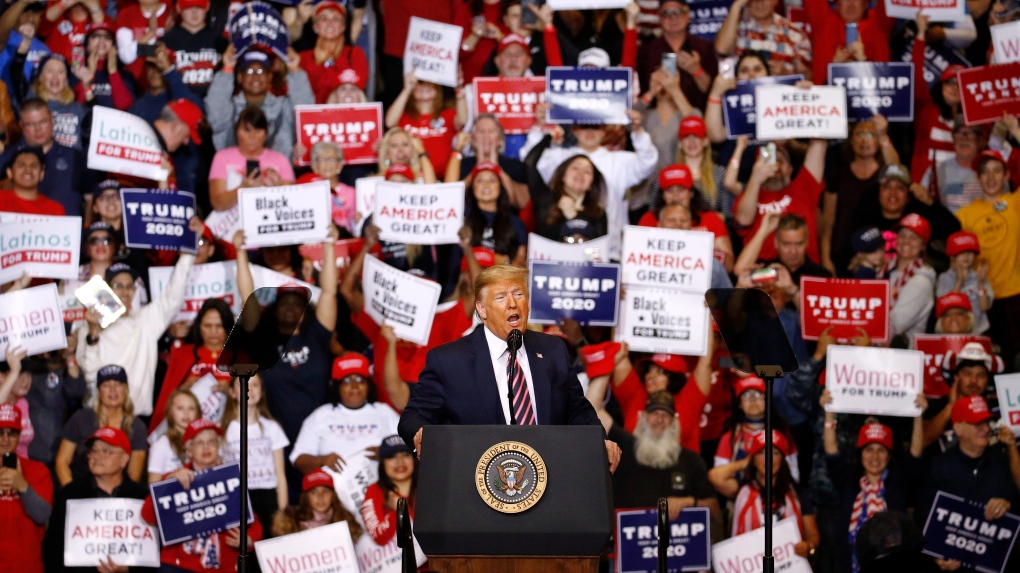 LAS VEGAS -- U.S. President Donald Trump rallied supporters in the battleground state of Nevada on the eve of the state's caucuses and predicted chaos once again for Democrats for their management of the voting process.

Looking to exploit Democratic divisions as he focuses on his reelection fight, Trump pointed to Iowa, where a tally of the caucus votes ended in chaos earlier this month.

"I hear their computers are all messed up just like in Iowa," Trump said of Nevada's Democrats. "They can't count votes."

Nevada scrapped its Republican caucuses last year, as is common when an incumbent is in the White House. It allows Trump to consolidate his support as the Democratic field remains bitterly divided. The state GOP will formally bind its delegates to Trump on Saturday.

Trump was closing out a four-day, four-state political tour through the West that saw him hold three campaign rallies, a pair of high-dollar fundraisers and promote policies that benefited many of his supporters.

Speaking to thousands of fans Friday at the Las Vegas Convention Center, Trump also rejected a fresh intelligence community assessment that Russia was seeking to interfere in the 2020 race just as it did in 2016 on Trump's behalf.

The president speculated that Russian President Vladimir Putin would prefer Vermont Sen. Bernie Sanders as president. "Wouldn't he rather have say, Bernie, who honeymooned in Moscow?" Trump said.

Sanders on Friday condemned Russian efforts to interfere in the 2020 election after The Washington Post reported U.S. officials have told him that Russia was trying to help his campaign. The statement did not confirm the report.

Feeling his reelection odds rising after his acquittal in the Senate impeachment trial and his campaign's record fundraising, Trump seized on the deep divisions and personal tiffs on display in this week's Democratic debate.

"We are going to win Nevada in a big, beautiful landslide," Trump predicted.

Trump called up to the stage members of the 1980 U.S. Olympic men's hockey team that defeated the Soviet Union's team in Lake Placid 40 years ago. Most were wearing Trump's signature red campaign hats.