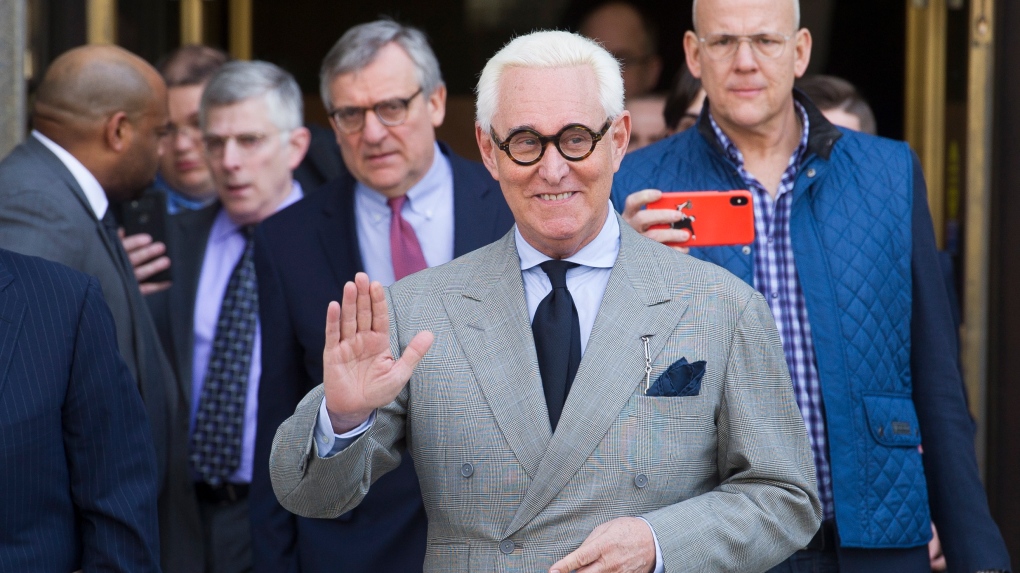 Roger Stone, an associate of President Donald Trump, leaves the U.S. District Court, after a court status conference on his seven charges: one count of obstruction of an official proceeding, five counts of false statements, and one count of witness tampering, in Washington, Thursday, March 14, 2019. Stone has pleaded not guilty to the charges. (AP Photo/Cliff Owen)

WASHINGTON -- U.S. President Donald Trump's longtime confidant, Roger Stone, asked a federal judge Friday to compel the Justice Department to turn over a full copy of special counsel Robert Mueller's report on the Russia investigation as part of discovery in his criminal case.

Stone has pleaded not guilty to charges he lied to Congress, engaged in witness tampering and obstructed a congressional investigation into possible co-ordination between Russia and Donald Trump's 2016 presidential campaign. In a court filing late Friday night, his lawyers said Stone is entitled to see the confidential report -- which was submitted to the attorney general late last month -- because it would help prove their allegation that there are constitutional issues with the investigation.

In a separate action, a former aide to Stone who was subpoenaed to testify before a grand jury asked a federal appeals court to determine whether he still needs to testify now that the Russia probe has concluded.

Stone's team also filed motions Friday night arguing he was selectively prosecuted, challenging the constitutionality of Mueller's appointment and that the special counsel didn't have the ability to prosecute him for lying to Congress. They allege that Congress did not formally make a referral to the Justice Department about Stone's testimony and because of that, Mueller's investigation was "a violation of the separation of powers."

In court documents, the lawyers argue they are entitled to a private disclosure of the nearly 400-page report that Mueller submitted to Attorney General William Barr late last month and said they "must be allowed to review the Report in its entirety because it contains the government's evidence and conclusions on matters essential to Stone's defence."

"To be clear, Stone is not requesting the Report be disclosed to the world - only to his counsel so that it may aid in preparing his defence," the lawyers wrote.

Stone, who is set to go on trial in November, has maintained his innocence and blasted the special counsel's investigation as politically motivated. He has pleaded not guilty to the charges, which stem from conversations he had during the campaign about WikiLeaks, the anti-secrecy group that released material stolen from Democratic groups, including Hillary Clinton's campaign.

In a four-page letter to Congress that detailed Mueller's "principal conclusions," Barr said the special counsel did not find a criminal conspiracy between Russia and Trump associates during the campaign, but did not reach a definitive conclusion on whether Trump obstructed justice. Instead, Mueller presented evidence on both sides of the obstruction question, but Barr said he did not believe the evidence was sufficient to prove that Trump had obstructed justice.

Barr has said he expects to release a redacted version of Mueller's report next week that will be sent to Congress and made public.

In the separate case, Andrew Miller, a former Stone aide, filed a petition with the U.S. Court of Appeals for the District of Columbia over the subpoena he was issued in Mueller's investigation.

Last year, Mueller's team sought Miller's testimony regarding Stone, WikiLeaks and the Russian government-controlled online persona Guccifer 2.0, which was used to release hacked material during the 2016 election. But Miller challenged his grand jury subpoena, arguing that Mueller's appointment was unconstitutional.

Earlier this year a three-judge panel of the court upheld the special counsel's appointment and a contempt order intended to force Miller to testify.

In the new petition, Miller's attorney, Paul Kamenar, argued that the matter now appears to be moot because Stone has been indicted and like "Cinderella's carriage that turned into a pumpkin at midnight, special counsel Mueller's authority expired."

Kamenar is now asking the court to have the government formally say whether it will still pursue Miller's testimony. If that's the case, Kamenar is asking for a rehearing of the case. He said in a statement that he will take the fight to the Supreme Court if necessary.