The Amazon wildfires are real, but this photo isn't

A record number of wildfires are burning across the Amazon rainforest, raising alarm bells from conservation groups and sparking deeper fears about the future of our planet.

But amid the crisis lies misinformation. A photo of smoke billowing from the rainforest has been widely shared online after a tweet from French President Emmanuel Macron, an Instagram post from actor Leonardo DiCaprio and a retweet from Prime Minister Justin Trudeau. 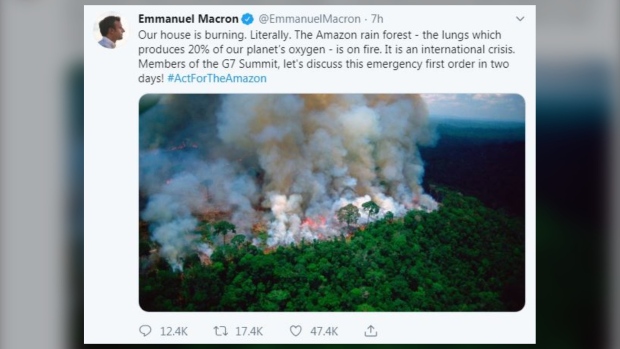 The problem: the image is outdated. A simple reverse-image search shows that the photo was taken by Loren McIntyre, who died in 2003, and appeared in news articles and stock image websites dating back years.

While the image is outdated, the ongoing fires are real. But some groups online are trying to use the image as evidence that the problem is being over exaggerated, as Brazil’s President Jair Bolsonaro has suggested.

Wildfires in the Amazon rainforest are rare because of the wet weather, but activity begins in July and August due to the arrival of dry season, which lasts until November. These fires can occur naturally, but humans also illegally set the forest ablaze to make room for farmland.

Even so, this year’s fires are worse. A staggering 74,155 fires have been recorded in Brazil, according to Brazil's National Institute for Space Research (INPE). That’s an 84-per-cent spike from last year’s fires.

Germany and Norway decided to withhold more than $60 million for sustainability projects in Brazilian forests, citing Brazil’s lack of commitment to tackle deforestation.

Bolsonaro has accused conservationists – without providing proof -- of setting the wildfires themselves in a bid to undermine his leadership. Bolsonaro’s chief of staff, Onyx Lorenzoni, said European countries are exaggerating the crisis for economic purposes.

"There is deforestation in Brazil, yes, but not at the rate and level that they say," Lorenzoni told the Brazilian news website globo.com.

The outdated photo is now being shared by some users – many of whom appear to support Bolsonaro – to back up the claim that the forest fires are being blown out of proportion. Some Twitter users have labelled the event “fake news.”

Images from NASA show the blaze visible from outer space. The INPE, which tracks the rainforest’s size, found that more than 1,500 square kilometres of rainforest has been destroyed over the past year.

The Amazon rainforest is the world’s biggest tropical rainforest, covering over 5.5 million square kilometres. Hundreds of Indigenous tribes live in the forest, which supplies more than 20 per cent of the world’s oxygen.

With files from CTV’s Ben Cousins and The Associated Press