Runner apologizes for slapping reporter's behind on live TV 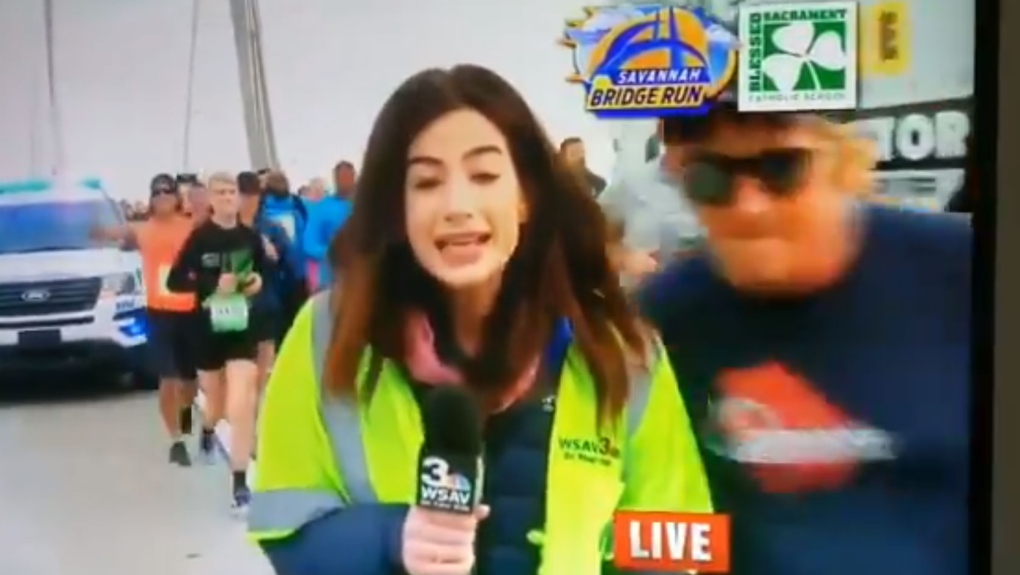 Tommy Callaway runs up behind TV reporter Alex Bozarjian and smacks her buttocks during a marathon in Savannah, Ga. (Twitter / @GrrrlZilla)

TORONTO -- A U.S. reporter is seeking criminal charges against the youth minister who smacked her backside while she was covering a marathon, according to a new report.

Alex Bozarjian, a reporter with NBC affiliate WSAV in Savannah, Ga., posted a video of the incident to Twitter on Saturday. The marathon participant, now identified as Tommy Callaway, can be seen running up behind Bozarjian and slapping her buttocks. She pauses mid-sentence for a second before continuing her report.

“To the man who smacked my butt on live TV this morning: You violated, objectified, and embarrassed me,” she wrote. “No woman should EVER have to put up with this at work or anywhere!! Do better.” The 16-second clip has been viewed more than 11.6 million times as of Wednesday.

On Monday, the reporter filed a police report with the Savannah Police Department. In an interview with CBS This Morning on Tuesday, Bozarjian said “He took my power and I’m trying to take that back,” she said. “I want to take my time with that.”

NBC News reported that Bozarjian is now seeking criminal charges against Callaway. The police department told the U.S. outlet that a detective has been assigned to her case, which is now under investigation.

To the man who smacked my butt on live TV this morning: You violated, objectified, and embarrassed me. No woman should EVER have to put up with this at work or anywhere!! Do better. https://t.co/PRLXkBY5hn

Callaway’s lawyer, Joseph Turner, said his client “did not act with any criminal intentions” in a statement to WTOC-TV.

“Tommy is a loving husband and father who is very active in the community,” Turner wrote. “We do not expect any criminal charges to arise from this incident, and we are working with those involved to correct the situation.”

Callaway himself tried explaining his actions in an interview with Inside Edition Tuesday, saying “I was getting ready to bring my hands up and wave to the camera and there was a misjudgment in character and decision making.” He added, “I touched her back. I did not know where exactly I touched her.”

The 43-year-old father of two told Inside Edition he did not see Bozarjian’s face because he kept running.

In the Inside Edition interview, Callaway said he agreed with Bozarjian’s Twitter statement.

“The two most important words were her last two words, ‘do better’, and that’s my intention,” he said.

While many reporters on Twitter spoke out in support of Bozarjian, others have emailed her to say she’s “a brat” and that the incident is “not that big of a deal.”

“I would say that 10 years ago maybe this was more of a common thing in culture, but it’s not okay now,” Bozarjian responded. “In order to make change, you have to be drastic and you have to chip away at this toxic culture that permeates our society.”

The Savannah Sports Council, which organizes sports-related events for the city, said in a Twitter post they would “not tolerate behaviour like this” at one of their events. The council has banned Callaway from future races.

With a file from CTVNews.ca writer Jeremiah Rodriguez