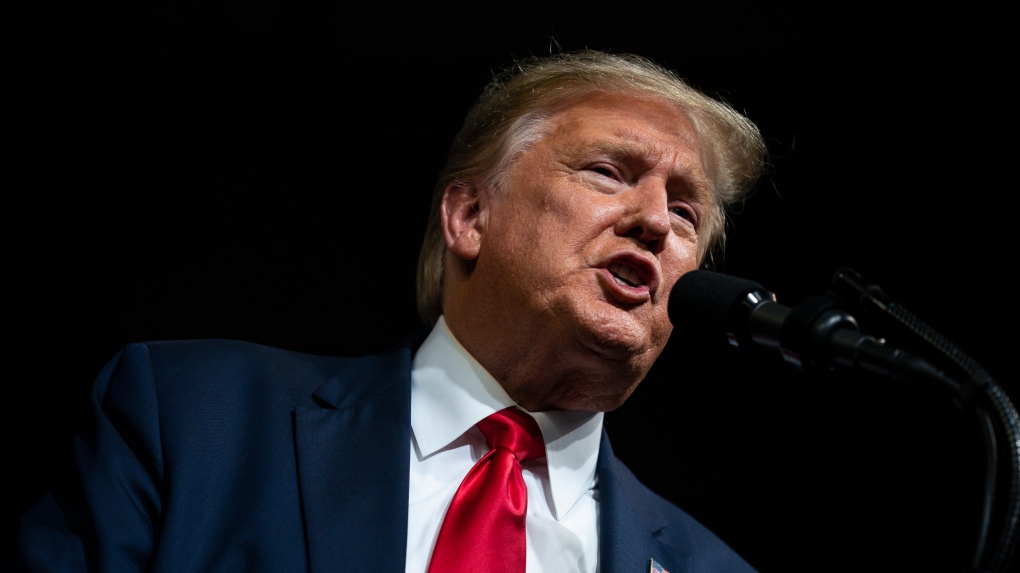 WASHINGTON -- "It's been three years of promises made and promises kept, but we're just getting started, (insert state here)."

That line from Vice-President Mike Pence is a hallmark of how he introduces President Donald Trump to campaign rally audiences. Last week, he delivered versions at rallies in Colorado Springs and Las Vegas.

But is it true? In some respects, yes. Trump has followed through on promises to cut regulations and renegotiate trade deals and to donate his salary, just to name a few.

But in many critical areas, promises made by the president have not been promises kept.

A look at some areas where rhetoric has not matched reality.

The economy under Trump will grow at a sustainable rate of "at least 3.5 per cent and as high as 4 per cent." The promise was part of the president's "Contract with the American voter" that was released in the weeks before the 2016 presidential election and fed the story line that he would light a fire under an Obama economy that Republicans repeatedly categorized as sluggish.

WHAT HAPPENED: Growth has largely followed the same trends of the Obama era, even after the stimulus from the 2017 tax cuts. The nation's economy, or gross domestic product, grew at a rate of 2.4 per cent in the president's first year in office, 2.9 per cent in 2018 and 2.3 per cent last year. The gains mean the economy is improving, just not as rapidly as what Trump pledged to voters, and that makes it difficult to build the political will to pay for his other stated initiatives such as fixing the nation's infrastructure.

When declaring his candidacy, Trump said he would "reduce our $18 trillion in debt." He later took those vows a step farther, declaring that he would not just balance the budget, but pay down the entire national debt.

WHAT HAPPENED: The opposite. The U.S. budget deficit through the first four months of this budget year is up 19% from the same period a year ago, putting the country on track to record its first $1 trillion deficit since 2012. The deficit reflected government spending that has grown 10.3% this budget year while revenues were up only 6.1%. The deficit has gone up every year of Trump's presidency. The national debt now stands at more than $23 trillion.

When announcing his White House run on June 16, 2015, Trump declared: "I will build a great, great wall on our southern border. And I will have Mexico pay for that wall."

WHAT HAPPENED: Mexico isn't paying. The president has tried in multiple ways to demonstrate otherwise. He has argued that the updated U.S. trade agreement with Canada and Mexico will pay for the wall because of economic benefits he predicts will come from the deal. But nothing in the trade agreement would cover or refund the construction cost or require a payment from Mexico. He told supporters at a rally that "redemption money is paying for the wall." Redemption payments don't exist; Trump apparently meant to cite remittances. That refers to money that immigrants in the U.S. send to their countries of origin, often to family members. Trump has at various times talked about taxing or blocking such money, but that has not been done.

Instead, the president has diverted money from military construction projects and approved using counter-drug spending to pay for wall construction. The reliance on Pentagon money continued anew this month when $3.8 billion previously authorized for F-35 fighter aircraft and other military programs was diverted to help build portions of the border wall.

To make his proposed tax cuts more palatable to voters, Trump dangled the idea that tax rates would go up for the rich. In May 2016, he told NBC: "For the wealthy, I think frankly it is going to go up and, you know what, it really should go up."

WHAT HAPPENED: Taxes on the rich went down, not up in the vast majority of cases. The top income tax rate fell from 39.6% to 37% as a result of the changes Republicans made to the tax code. The new cap on state and local tax deductions limited the benefits for some of the very rich. But households earning more than $1 million saved on average more than $64,000 last year, according to an analysis by Congress' Joint Committee on Taxation. People earning $50,000 to $100,000 got about a $1,000 cut from their income taxes.