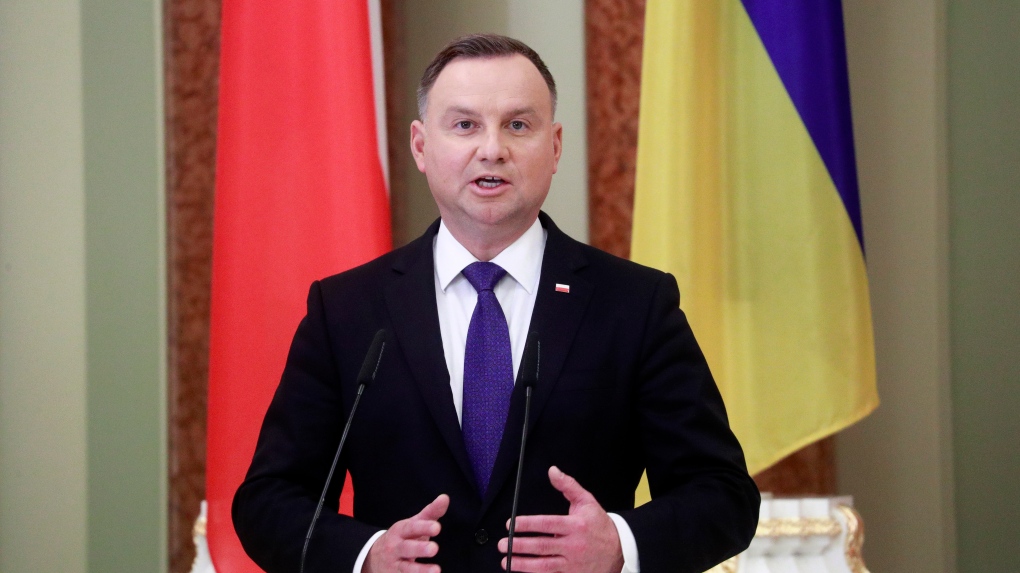 WARSAW, POLAND -- Polish President Andrzej Duda says he feels well despite testing positive for the coronavirus, and he apologized Saturday to everyone who must quarantine because they had contact with him.

Duda, 48, said in a recording published on Twitter that he was experiencing no COVID-19 symptoms "but unfortunately, the test result is absolutely unambiguous."

"I would like to apologize to all those who are exposed to quarantine procedures because of meeting me in recent days," he said. "If I had had any symptoms, please believe me, all meetings would have been cancelled."

Duda's diagnosis comes amid a huge surge in confirmed new cases of COVID-19 and virus-related deaths in Poland, a nation of 38 million that saw very low infection rates in the spring.

The president's key constitutional roles include guiding foreign policy and signing legislation. But many of his duties are ceremonial, and most of the responsibility for running the country lies with Prime Minister Mateusz Morawiecki's government.

Poland on Saturday reported 13,628 new confirmed cases and a record daily number of COVID-19 deaths, 179. The daily case count was the nation's second-highest of the pandemic after a record number set Friday.

Social tensions are also growing in the country.

At the same time, people took to the streets in Warsaw and other cities for a third day to protest a Polish court ruling that declared abortions of fetuses with congenital defects unconstitutional. The decision further restricted what was already one of Europe's strictest abortion laws.

Critics accuse Poland's right-wing ruling party of using the cover of the pandemic and a court it has filled with loyalists to impede abortion access in a legally dubious manner. They also accuse the Law and Justice party of seeking to exacerbate social conflicts to distract attention from soaring COVID-19 infection rates.

The fast spread of the virus is pushing Poland's strained health system to the breaking point. Doctors say patients are dying not only from COVID-19, but from other illnesses that overwhelmed hospitals are unable to treat.

The government is preparing to open field hospitals, but it is not clear where it will find the doctors and nurses to staff them.

Duda on Friday visited the National Stadium in Warsaw, which is being transformed into one of the field hospitals. He also bestowed state honours Friday on Iga Swiatek, the 19-year-old Polish tennis player who won the French Open this month, and her father and trainer, Tomasz Swiatek.

Duda and the Swiateks wore masks and gloves but stood very close and shook hands as the president fastened honorary pins on them.

Iga Swiatek said she and others on her team have no symptoms but would go into quarantine following Duda's positive test. She said they are tested regularly and would be tested again in three days.

The Polish government imposed new restrictions starting Saturday that are just short of a lockdown in hopes of bringing the country's outbreak under control. The prime minister appealed to Poles to strictly observe these "serious restrictions" in order to protect lives.

The country currently has some 11,500 patients hospitalized with COVID-19 and 911 of them on respirators, the Health Ministry said.