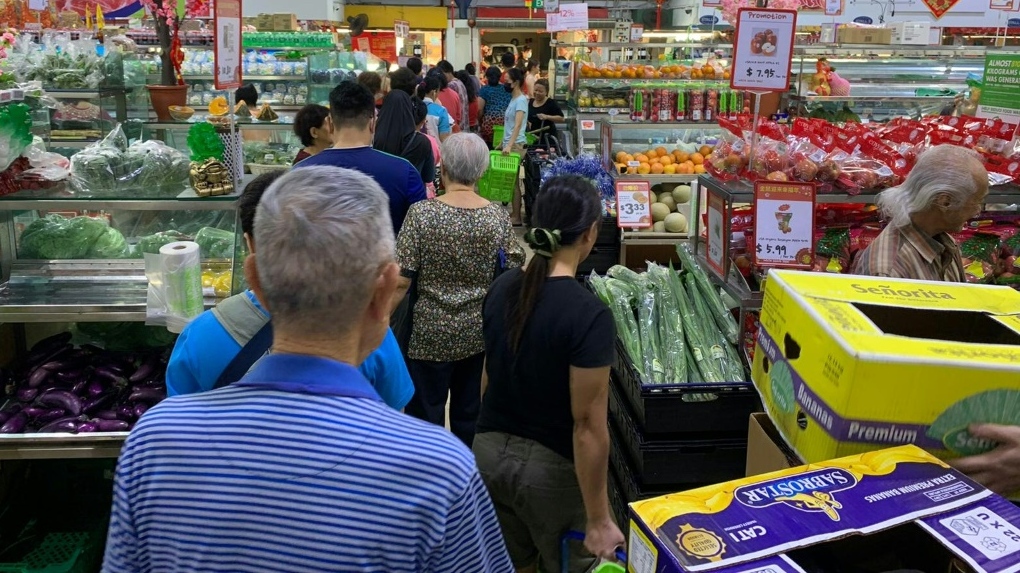 Singaporeans started stocking up after the city raised its coronavirus alert to orange, the second highest. (AFP)

Since emerging late last year, the virus has killed over 811 people and infected more than 37,000 in China, and spread to many other countries.

Singapore, which has reported 33 cases, raised its alert level Friday to "orange" -- the same as during the deadly 2003 SARS outbreak, indicating the virus is severe and passes easily between people.

The announcement triggered panic in the city-state of 5.7 million starting late Friday, with shoppers -- many wearing masks -- rushing to stock up on items including rice, noodles and toilet paper.

Pictures circulating on social media showed empty shelves in some stores, carts filled with goods and long lines at counters, which continued into Saturday.

"I'm afraid that if they further raise the alert level, we will not be able to go out," a 50-year-old housewife, who did not want to be named, told AFP after leaving a grocery store.

The highest level on Singapore's four-point scale for dealing with disease outbreaks is "red", one above "orange."

There were, however, ample stocks of other items such as fruit, meat, fish, and alcohol.

Prime Minister Lee Hsien Loong urged calm, saying Singapore had "ample supplies" and there was no need for people to stock up with items such as instant noodles or toilet paper.

"Fear can do more harm than the virus itself," he said in a statement.

"It can make us panic, or do things which make matters worse, like circulating rumours online, hoarding facemasks or food, or blaming particular groups for the outbreak."

Singapore raised its alert level amid a growing number of virus cases in citizens with no recent travel history to mainland China and no known links to previous infections.

Hong Kong has also been hit by a wave of panic-buying in recent days as it seeks to battle the virus, with supermarket shelves frequently emptied of crucial goods.