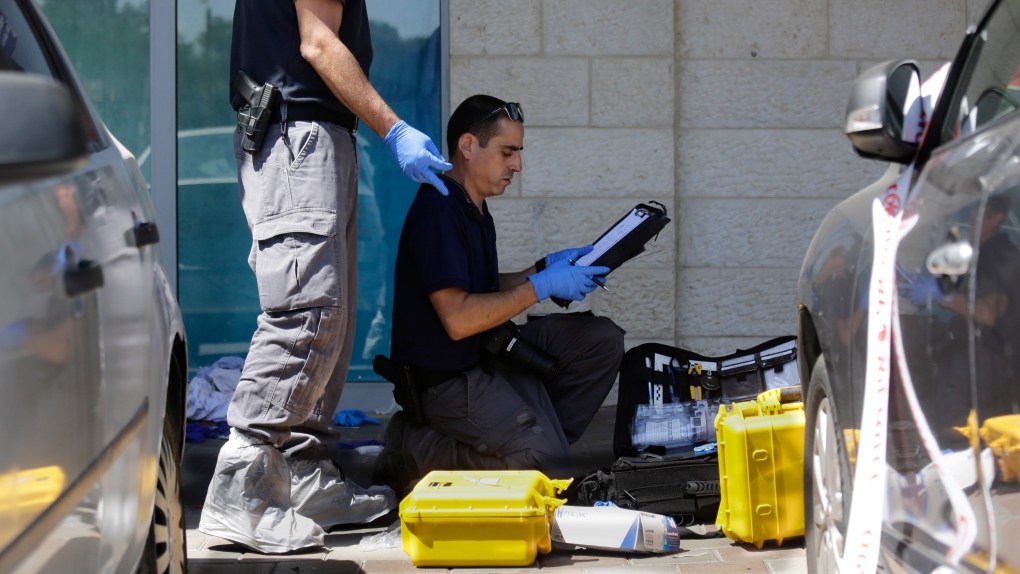 Israeli police investigates at the scene of an stabbing attack in the West Bank settlement of Gush Etzion Sunday, Sept. 15, 2018. The Israeli military says a Palestinian attacker has stabbed and critically wounded an Israeli man in front of a mall. (AP Photo/Mahmoud Illean)

JERUSALEM -- A Palestinian assailant on Sunday fatally stabbed a well-known Israeli settler to death Sunday at a busy mall in the West Bank.

The victim was identified as Ari Fuld, a U.S.-born activist who was popular in the local community and an outspoken Israel advocate on social media platforms.

The military said the attacker arrived at the mall near a major junction in the southern West Bank, close to the Gush Etzion settlement bloc, and stabbed the Fuld before fleeing. Video footage showed Fuld giving chase and firing at his assailant before collapsing. Other civilians shot the attacker, whom Israeli media identified as a 17-year-old from a nearby Palestinian village. His condition was unclear.

Fuld, a 40-year-old father of four who lived in the nearby settlement of Efrat, was evacuated to a hospital, where he was pronounced dead.

Fuld was a well-known English-language internet commenter on current affairs and the weekly Torah study. He was known for his nationalist ideology and strong support for the Israeli military.

Lior Shourka, a friend of Fuld's, called him a "true Israeli patriot."

Since 2015, Palestinians have killed over 50 Israelis, two visiting Americans and a British tourist in stabbings, shootings and car-ramming attacks. Israeli forces killed over 260 Palestinians in that period, of which Israel says most were attackers.