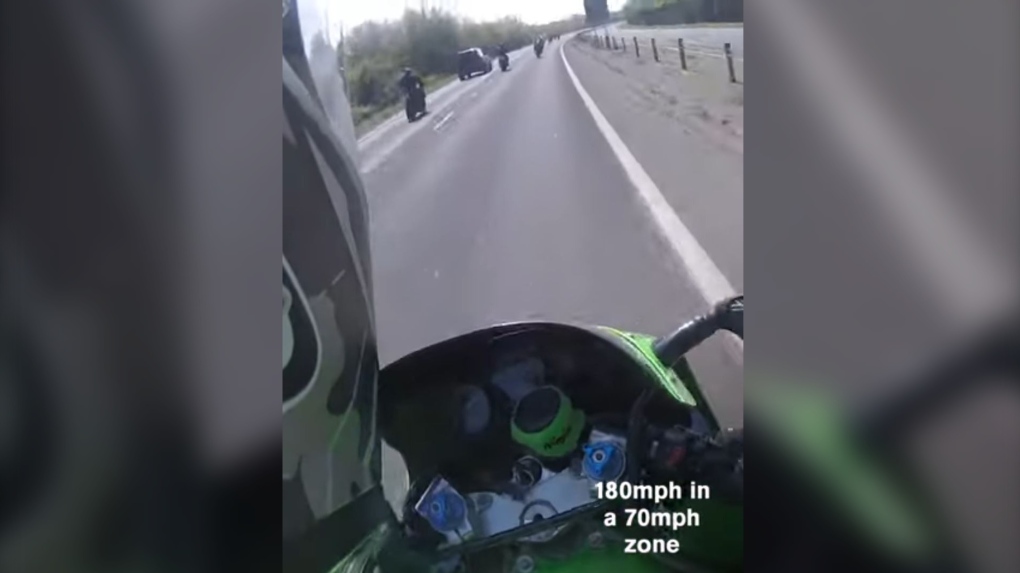 Three motorcyclists received varying jail sentences for dangerous driving and 2-year driving bans, after the trio recorded themselves performing high-speed stunts on one of their head cameras. (Sussex Police)

Sussex Police in the U.K. said they’d been looking into reports of dangerous driving and a collision since April. They eventually tracked down motorcyclist Thomas Ettridge and his head-mounted GoPro camera.

Police seized his footage, which contained a number of potentially “shocking” disastrous motorcycle stunts, Sussex police said in a written statement. These included one of the motorcyclists popping a wheelie at nearly 130 km/h in a 60 km/h zone.

All three men were subsequently charged with dangerous driving.

Police released the footage last week after the three men involved pleaded guilty in a U.K. court on Nov. 20. Police Const. Chris Welsh said “this has been a shocking investigation into some of the fastest and most dangerous motorcycling I have ever come across.

“The speeds and general aggressive manner of the riding identified are simply ridiculous and leave no room for error should the slightest of issues have occurred."

Officers released the footage to the public “to raise awareness of the real risks associated with dangerous driving.”

“The speeds and general aggressive manner of the riding identified are simply ridiculous and leave no room for error should the slightest of issues have occurred,” police said.

“Not only are the riders risking their own lives, but also those of the other road users around them throughout these journeys,” it continued, noting that the trio’s “sentencing should act as a stark reminder of the consequences of such behavior on the roads in Sussex."

During their police interview, each of the men admitted the “manner of their riding fell far below the standard of a careful and competent motorist, and they showed remorse for their actions.”

The judge who ruled their cases described the motorcyclists’ actions as “colossally stupid and massively selfish” and said it was “nothing more than good fortune that (they) were not killed or injured”.