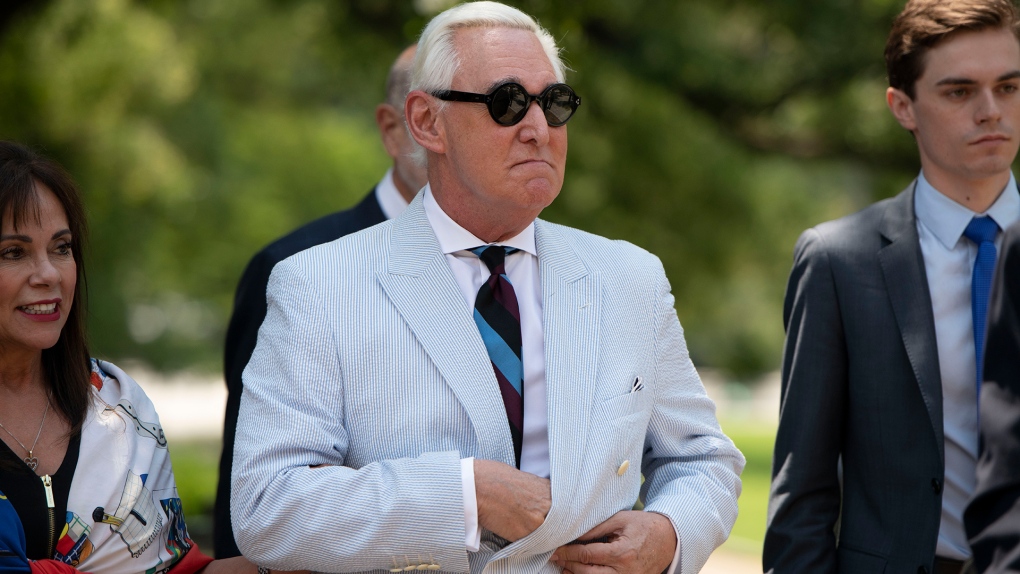 A federal judge barred Stone from posting on social media Tuesday after concluding that the longtime confidant of U.S. President Donald Trump, who is charged with lying in the Russia investigation, repeatedly flouted her gag order.

Although U.S. District Judge Amy Berman Jackson did not send Stone to jail or find him in contempt, she sharply scolded him for using social media -- and his platform of tens of thousands of followers -- to disparage the case against him and mock the broader probe into Russian election interference. She cast him as a publicity hound who either cannot or will not follow simple orders to not publicly comment on the case.

"So what am I supposed to do with you? It seems as if, once again, I'm wrestling with behaviour that has more to do with middle school than a court of law," the exasperated judge said. "It's tempting to ignore it all completely, but if I don't respect and uphold my own orders, why would I expect anyone else to?"

The social media ban lasts for the duration of the criminal case and extends well beyond an earlier order from February that restricted him from public statements on the case, including on Instagram and other social media sites. That order, which Jackson said was "clear as day," was imposed after Stone posted a photo of the judge with what appeared to be crosshairs of a gun. She said she had twice given him the benefit of the doubt, only to have him ignore her decree.

Many of the posts at issue have attempted to call into question the legitimacy of the investigation into ties between the Trump campaign and Russia, as well as to cast doubt on the intelligence community's assessment that Russia hacked Democratic emails.

"This defendant plainly appears to seek attention, positive or negative. The posts appear to be attempts to get attention when coverage of the case is flagging, and possibly to prompt me to react in a way that would garner even more attention," Jackson said. "It seems that he is determined to make himself the subject of the story."

The arguments underscored how some of the Trump aides charged in special counsel Robert Mueller's investigation have repeatedly tested the limits of the court with unorthodox behaviour. They also showed the continued resistance by Stone, a provocative personality with a large online following, to efforts to silence him or prevent him from publicly asserting his innocence or attacking the investigation.

While most defendants normally look to avoid the government's ire, Stone has regularly thumbed his nose at the prosecution. Another defendant, former Trump campaign chairman Paul Manafort, was jailed before trial after Jackson found that he had improperly contacted a witness in the case. And George Papadopoulos, another ex-aide, publicly attacked the Mueller probe after his sentencing last year.

Stone is charged with witness tampering and lying to congressional lawmakers in their investigation into ties between the Trump campaign and Russia. He has pleaded not guilty. A jury trial has been tentatively scheduled for this fall.

Since the original gag order, he's made a series of Instagram posts that have caught prosecutors' attention. In court Tuesday, Assistant U.S. Attorney Jonathan Kravis said prosecutors were flagging the posts because they believe they show that he's unwilling to comply with the gag order, and also present a risk to a fair trial. He did not request that Stone be jailed but said he did think the judge, at minimum, should clarify her earlier order.

Jackson went through Stone's posts one by one with defence lawyer Bruce Rogow as she assessed whether they ran afoul of her order. The posts included screenshots of news pieces calling into question intelligence agencies' conclusion that Russia had hacked Democratic email accounts, and exhortations that mainstream media organizations should cover that side of the story. Another one asked "Who Framed Roger Stone?" a riff on the popular 1980s film "Who Framed Roger Rabbit?"

"I understand how one can look at them and come to the conclusion that, yes, they were either at the line or crossed the line," Rogow said. "But Mr. Stone has tried to hew to that line."

He said he believed none of the posts violated the court's order unless the only thing Stone was permitted to say was "Hello, I'm Roger Stone."

Rogow argued that Stone was using social media to communicate to others what is happening in the case, "but not doing it in a way that would affect or infect what the whole underlying reason is for the Court's order" -- to ensure an impartial jury and a fair trial.

But Jackson said another, more basic question was of concern: whether Stone violated her original order.