Hurricane rips roofs, cuts power in Bermuda, but no deaths 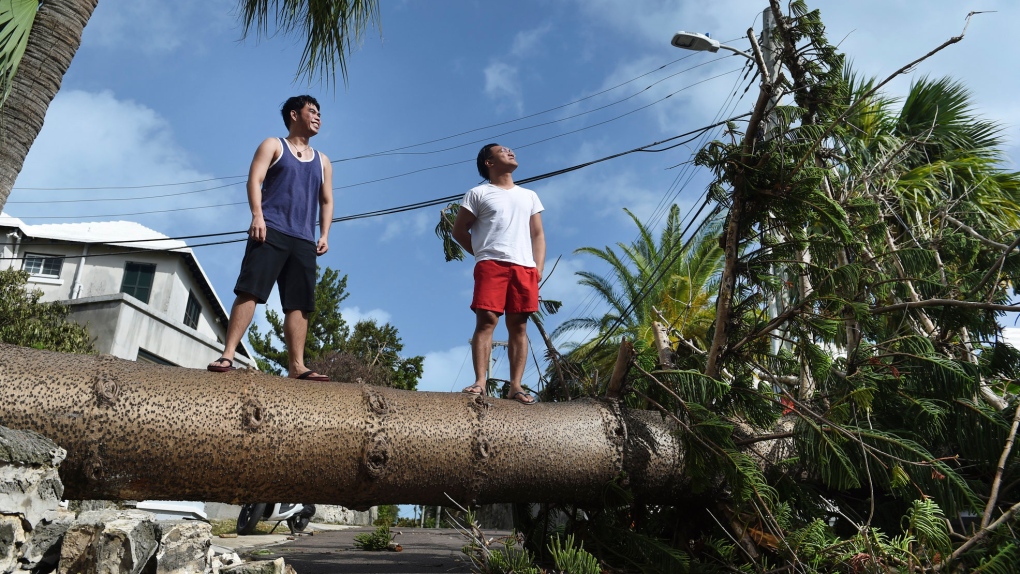 MIAMI -- Hurricane Humberto blew off rooftops, toppled trees and knocked out power as it blew past the British Atlantic island of Bermuda. But officials said Thursday that the Category 3 storm caused no reported deaths.

"We've made it through and everyone is safe," Premier David Burt said. "That's what is most important."

Security Minister Wayne Caines said power had been restored to most customers by midday Thursday and emergency crews were clearing roads of power lines damaged by the hurricane, which had winds of about 195 kph at its nearest approach to the island Wednesday night.

"The country is getting back on its feet and the good news is there was no loss of life," he said.

The U.S. National Hurricane Center said Humberto would still kick up high surf in Bermuda and along the U.S. East Coast.

The storm had maximum sustained winds of 165 kph late Thursday afternoon, with tropical storm-force winds extending outward for 610 kilometres, covering a huge swath of ocean. The storm was centred about 885 kilometres northeast of Bermuda and moving to the northeast at a brisk 39 kph.

Meanwhile, a brush with land near Puerto Vallarta knocked newly formed Hurricane Lorena back down to tropical storm force, though forecasters said it would soon become a hurricane again on a track that would carry it close to the Los Cabos resorts at the tip of the Baja California Peninsula by midday Friday.

The storm's centre came onshore in darkness in the western state of Colima, whipping palm trees about with its strong winds and lashing the area with sheets of rain.

Lorena flooded streets, washed out roads and touched off minor slides in 10 municipalities. Dozens of trees were downed, and there were power outages in some areas.

Water topped the banks of an arroyo and swamped some homes in the port city of Manzanillo, where 21 people sought refuge at a temporary shelter at a school, state Gov. Jose Ignacio Peralta said Thursday.

At an afternoon news conference, Peralta said nearly 200 millimeters of rain had fallen in a little under 24 hours, and more than 3,000 hectares of crops such as bananas and papayas were damaged statewide.

But there were no deaths or significant damage to infrastructure, he said.

"There are no losses of human lives to lament," Peralta said.

Lorena had maximum sustained winds of 110 kph Thursday evening and it was centred about 300 kilometres east-southeast of Cabo San Lucas. It was moving to the northwest at 19 kph.

Forecasters said the storm could bring 12.5 to 25 centimetres of rain to parts of the region. Mexican officials voiced concern that some parts of southern Mexico, which have seen a lack of rainfall, could suffer dangerous flash floods and landslides unleashed by torrential rain.

Authorities in Los Cabos said schools would be closed Friday.

Another tropical storm, Mario, was also moving north across the Pacific several hundred miles farther out to sea. It was located about 645 kilometres south of the southern tip of the Baja California Peninsula and had sustained winds of 95 kilometres. It wasn't expected to hit land, however.

In Texas and Louisiana, the remains of Tropical Depression Imelda kept bringing rains and flooding. Forecasters warned that Imelda could drop up to 90 centimetres of rain in some areas of Texas through Friday.

In the Texas town of Winnie, about 95 kilometres east of Houston, a hospital was evacuated and water was inundating several homes and businesses.

Elsewhere in the Atlantic region, Jerry strengthened into a hurricane on a track that would carry it near the northern Leeward Islands on Friday and north of Puerto Rico on Saturday.

It had maximum sustained winds of 150 kph Thursday evening and was centred about 700 kilometres east of the northern Leeward Islands. It was moving to the west-northwest at 28 kph.