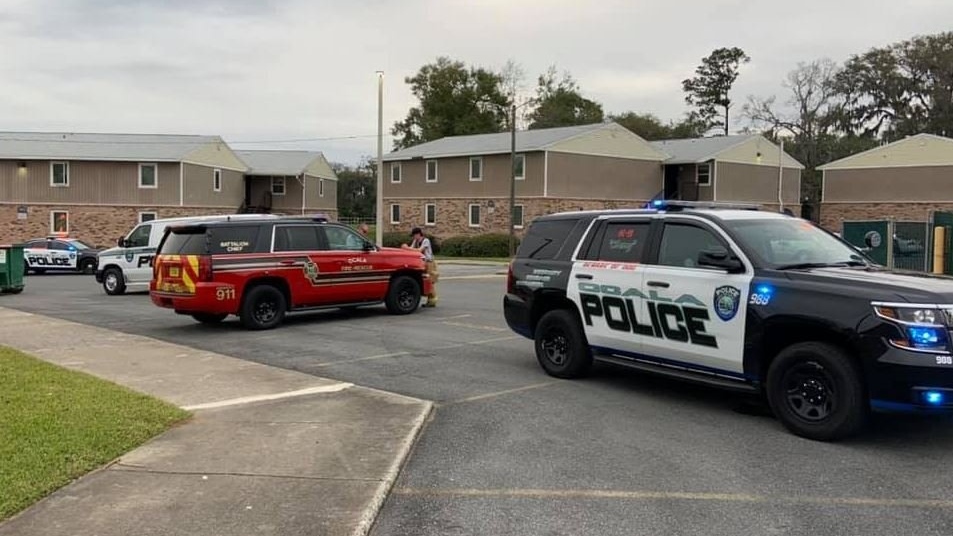 Ocala Police are at the scene where a boy, 9, is accused of stabbing his little sister. (Ocala Police Department/CNN)

A 9-year-old boy has been charged with attempted murder in the first degree after he allegedly stabbed his 5-year-old sister with a kitchen knife in an apartment, according to the Ocala Police Department in Florida.

At his initial court appearance in Marion County on Tuesday, a judge ordered the boy to undergo psychiatric evaluation, video from CNN affiliate WESH showed.

He was also assigned a public defender and will remain in secured detention, CNN affiliate WKMG reported. CNN reached out to the Marion County Public Defender's office but has not yet heard back. His next court appearance is scheduled for February 5.

CNN is not naming the child because of his age.

The mother of the children told police that she left the apartment for about 10 minutes on Monday to check the mail and get some candy for her children from a neighbor in the Berkeley Pointe Apartments complex, according to the arrest affidavit. When she returned to check on them, she found her son stabbing her daughter in his room, the affidavit said.

"Die, die!" she recalled him saying, according to the affidavit.

The mother said she grabbed the knife from her son and rushed her daughter to the bathroom, and that her son ran out of the apartment, the affidavit said. The boy was located on the property and taken into custody shortly after law enforcement arrived on the scene.

The police detective that detailed the incident in the affidavit wrote that he saw a large kitchen knife in the hallway that appeared to have blood on the blade, along with blood inside the room and leading out into the hallway.

The boy told the officer that while his mother was gone, he went to the kitchen, got a knife and hid it behind his back as he approached his sister, the affidavit said. His sister was bent over trying to show him something on the floor, the boy said, according to the affidavit, and he grabbed her by the back of the neck and began stabbing her.

When the officer asked the boy why he stabbed his sister, the boy told him that he wanted to kill her and that "the thought had entered his head two days earlier," according to the affidavit.

He said he tried to get it out of his head but could not, according to the affidavit.

Police said the girl was stabbed multiple times and airlifted to a hospital for treatment, according to a news release from the Ocala Police Department. Authorities did not have an update on her condition.