Egypt's Bent Pyramid opens to tourists for first time since 1965

The Egyptian Ministry of Antiquities has opened the 4,600-year-old Bent Pyramid to visitors for the first time in 54 years.

Built around 2600 BC during the Old Kingdom of the Pharaoh of Sneferu, the pyramid got its name of "Bent Pyramid" or "the Pyramid with Two Angles" for having two different angles of inclination from base to top. 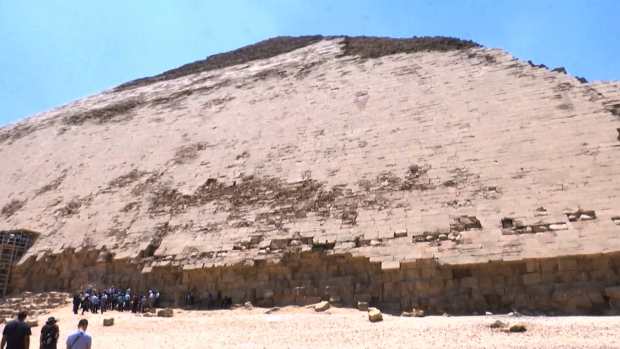 The pyramid, located about 40 kilometres south of Cairo, was closed in 1965 for restoration and repairs.

Egypt's antiquities minister Khaled El-Anany told reporters that the Bent Pyramid underwent extensive conservation work, including making repairs with some of the original stone that had fallen off.

It was reopened to the public on Saturday during an inauguration ceremony held by the ministry.

The ceremony was attended by the governor of Giza as well as ambassadors and diplomats from about 40 Western, Asian, Arab and African states.

It’s the second pyramid to be reopened to the public in recent weeks.

Late last month, the 4,000-year-old mud-brick Lahun pyramid was also opened to the public in Fayoum, about 95 kilometres southwest of Cairo.