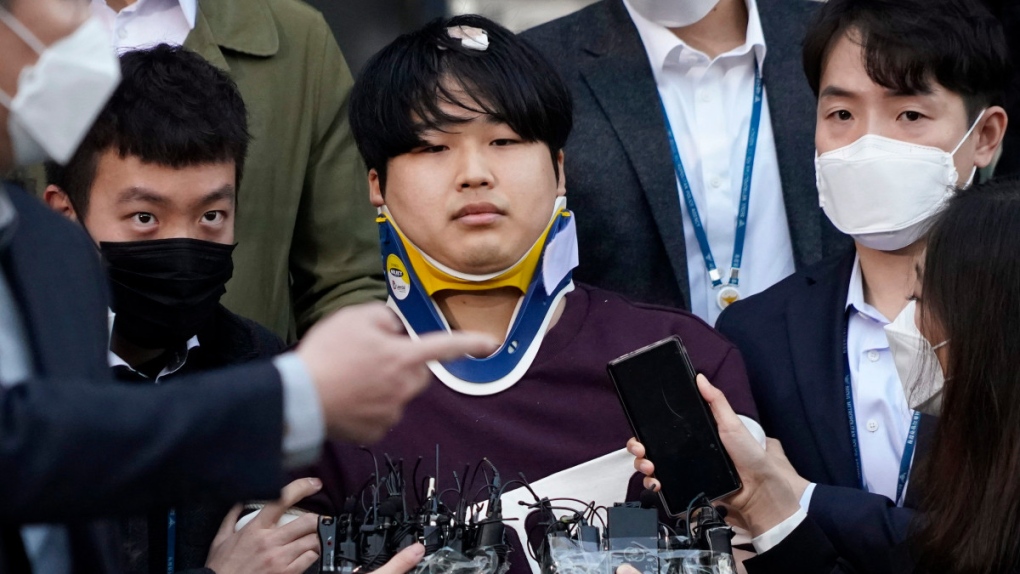 One girl wrote the word slave above her genitals. Another was made to bark like a dog while naked.

As many as 74 victims were blackmailed by Cho into uploading images onto the group chats, some of the users paid for access, police said. Officials suspect there are about 260,000 participants across Cho's chat rooms.

At least 16 of the girls were minors, according to officials.

On March 20, the authorities announced that Cho had been arrested on charges including producing and distributing child pornography, sexual abuse, blackmail, coercion, fraud, illegal distribution of private information, and sexual assault through illegal filming but he has not been indicted.

For South Koreans, the case has become a lightning rod for a nation grappling with widespread sexual abuse and accusations of pervasive misogyny, after a series of scandals involving the secret or forced taping of women in recent years.

On Monday, President Moon Jae-in responded to the rising anger, calling for police to investigate all members of the chat groups, not just Cho. Currently, 124 people connected to the chat groups have been arrested, and 18 have been detained.

But for many South Koreans, an investigation is not enough.

Over four million people have signed two petitions demanding the heaviest of punishments for the arrested operator and calling for the names and faces of all involved to be released.

Cho, who has only appeared once since his arrest, gave a statement on March 25, at the Jongno Police Station in Seoul before being transferred to the prosecutors' office. "Thank you for stopping a life of a devil which I couldn't stop myself," he said.

Cho's lawyers quit on March 25 according to the law firm and authorities. The law firm told CNN that the reason for this decision was because information they received from Cho's family when they accepted the case was very different from the facts.

It was two university journalism students who brought Cho to the attention of the police last July, officials confirmed to CNN.

The duo, who asked to use the pseudonyms Kwon and Ahn to protect their own safety, discovered the chat groups, which were hosted on the encrypted Telegram messaging app, in the summer of 2019, as part of an assignment to investigate online sexual crimes.

Though the chat groups were private, links to them were easily found by simply using keyword searches on Google.

When Kwon first saw the chat rooms, she said she "couldn't believe the scenes and messages unfolding before her eyes."

"I felt that I needed to bring these serious crimes to the public's attention," Ahn said.

There were many operators running similar chats on Telegram, but Kwon and Ahn focused on Cho, who went by the alias of "Guru" and ran at least eight groups, some of which had over 9,000 members at any one time.

Young women would submit their personal information, including their social security numbers and addresses, so they could get paid, along with photographs.

Once hired, they would allegedly be asked to provide more revealing pictures. Police believe these were then used to blackmail the young women -- Cho allegedly threatened to post them on the internet with their personal details if the girls did not work in his Telegram chat rooms, police said.

Cho allegedly ran free-of-charge chats, which offered the chance to pay to upgrade to more premium groups, where they could make increasingly demanding requests of the girls. Users paid as much as $1,200 to enter a room using bitcoin transactions, according to police.

Each Telegram group had about three to five girls to one chat room Guru called as 'slaves,' who would be online and ready to take requests for pictures and videos of them performing acts, which they captured on their own cameras, from both paid-members and the operator, according to Kwon and Ahn.

While the encrypted nature of Telegram has proven itself to be a tool for resistance against authoritarian regimes around the world, the anonymity of the platform allows the chat room participants to be able to remain anonymous.

CNN has reached out to Telegram for response but has not heard back.

Bitcoin is a decentralized currency, meaning there is no company or official bank which oversees transactions. Users store their Bitcoin in a virtual account -- known as a digital wallet -- without having to prove their real identity, as they might for a regular brick-and-mortar bank account.

This keeps bitcoin users' transactions private, without easily tracing it back to them and that's why it has become the currency of choice for people online buying drugs or other illicit activities.

Cho's arrest is the latest in a series of online sexual scandals involving women in South Korea in recent years.

In 2019, South Korean police discovered an online group chat that shared sexually explicit videos of women filmed without their knowledge and consent, and named several high-profile K-pop stars as members of the group.

Nam said: "It's important to detect digital sex crimes as soon as possible by using Artificial Intelligence technology monitoring and laws should keep up with these changes so that not only the ones producing these materials but the users can be punished."

What makes Cho's case particularly disturbing is the allegation that at least 16 of the known victims were minors.

Under current South Korean laws, possessing child or juvenile pornography is punishable by up to one year in prison or fines up to 20 million Korean won ($16,000) but the act of watching pornographic videos when the viewer doesn't know the subject is underage is not punishable.

That creates a defense where viewers can prove they did not realize the girl was a minor.

Only 80 people out of the 3,449 charged with distributing sexually abusive videos of children received jail terms between 2015 and 2018, according to the South Korean Prosecutors' Office.

Lawmaker Jin Sunmee believes stronger punishments for these crimes is vital. "Our justice system is too lenient to offenders and it is heartbreaking to think the system has missed its golden time to protect our children," Jin said.

Nam agreed. She said: "Women are not objects to be consumed. Women are human beings. The continuous digital sexual crimes can only come to an end when people genuinely believe in this."