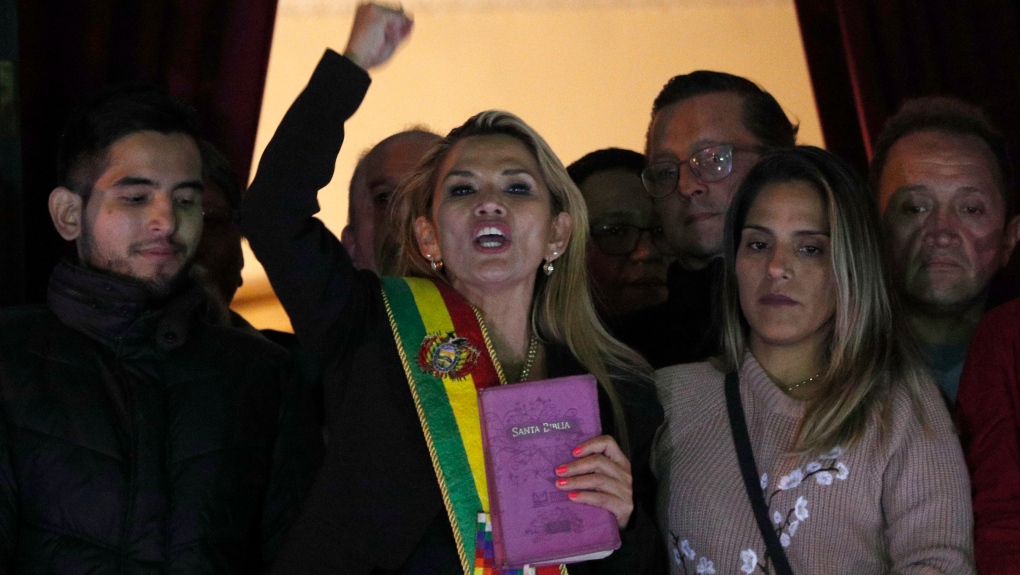 The Senate's second vice president and opposition politician Jeanine Anez, center, wearing the Presidential sash addresses the crowd from the balcony of the Quemado palace after she declared herself interim president of the country, in La Paz, Bolivia, Tuesday, Nov. 12, 2019. (AP Photo/Juan Karita)

LA PAZ, Bolivia -- Renewed clashes rocked Bolivia's capital Wednesday as the woman who claimed the presidency, a second-tier lawmaker thrust into the post because of a power vacuum, faced challenges to her leadership from supporters of the ousted Evo Morales.

A day after Jeanine Anez assumed power, violent clashes broke out between rock-throwing Morales' backers and police in riot gear, who fired volleys of tear gas to disperse the large crowd of protesters as fighter jets flew low overhead in a show of force.

Opposition was also building in Congress, where lawmakers loyal to Morales were mounting a challenge to Anez's legitimacy by trying to hold new sessions that would undermine her claim to the presidency. The sessions -- dismissed as invalid by Anez's faction -- added to the political uncertainty following the resignation of Morales, the nation's first indigenous leader, after nearly 14 years in power.

In the streets, angry demonstrators tore off corrugated sheets of metal and wooden planks from construction sites to use as weapons, and some set off sticks of dynamite. Many along flooded the streets of the capital and its sister city of El Alto, a Morales stronghold, waving the multicolored indigenous flag and chanting, "Now, civil war!"

"We don't want any dictators. This lady has stepped on us -- that's why we're so mad," said Paulina Luchampe. "We're going to fight with our brothers and sisters until Evo Morales is back. We ask for his return. He needs to put the house in order."

The 60-year-old Morales, who arrived in Mexico on Tuesday under a grant of asylum, has vowed to remain active in politics and said he would be willing to go back home. "If the people ask me, we are willing to return," he said at news conference Wednesday in Mexico City.

According to the constitution, an interim president has 90 days to organize an election, and the disputed accession of Anez, who until Tuesday was second vice-president of the Senate, was an example of the long list of obstacles she faces. Morales' backers, who hold a two-thirds majority in Congress, boycotted the session she called Tuesday night to formalize her claim to the presidency, preventing a quorum.

She claimed power anyway, saying the constitution did not specifically require congressional approval. "My commitment is to return democracy and tranquility to the country," she said. "They can never again steal our vote."

Bolivia's top constitutional court issued a statement late Tuesday laying out the legal justification for Anez taking the presidency -- without mentioning her by name.

But other legal experts challenged the legal technicalities that led to her claim, saying at least some of the steps required Congress to meet.

The lingering questions could affect her ability to govern.

Eduardo Gamarra, a Bolivian political scientist at Florida International University, said the constitution clearly states that Anez didn't need a congressional vote to assume the presidency. Even so, "the next two months are going to be extraordinarily difficult for President Anez," he said.

"It doesn't seem likely" that Morales' party will accept Anez as president, said Jennifer Cyr, an associate professor of political science and Latin American studies at the University of Arizona. "So the question of what happens next remains -- still quite unclear and extremely worrying."

She will need to form a new electoral court, find non-partisan staff for the electoral tribunal and get Congress, which is controlled by Morales' Movement for Socialism Party, to vote on a new election.

Morales resigned Sunday following weeks of violent protests fed by allegations of electoral fraud in the Oct. 20 election, which he claimed to have won. An Organization of American States audit reported widespread irregularities in the vote count and called for a new election.

But his resignation came only after Gen. Williams Kaliman, the armed forces commander, urged him to step down "for the good of Bolivia" -- a move that Morales and his backers have branded a coup d'etat.

Anez swore in a new Cabinet as well as new commanders-in-chief for all branches of the military Wednesday, replacing Kaliman, who had been a Morales loyalist, with Gen. Carlos Orellana. The move was seen as an effort to build an alliance with the military, although it was uncertain how much support she could count on from other Bolivian power centres.

Still, she received a boost of international support Wednesday.

Michael G. Kozak of the U.S. State Department's Bureau of Western Hemisphere Affairs welcomed her as "interim constitutional president," saying on Twitter: "We look forward to working with her & Bolivia's other civilian authorities as they arrange free & fair elections as soon as possible, in accordance w/ Bolivia's constitution."

Brazil, which is one of Bolivia's top trading partners, also congratulated her on her "constitutional" assumption of the presidency and her determination to work for peace and hold elections soon. Colombia and Guatemala also recognized her as interim president.

While Argentine President Mauricio Macri had not commented on the issue, Argentine lawmakers in both houses of Congress condemned what they called a coup.

Anez said on Twitter that she has also reached out to Venezuelan opposition leader Juan Guaido and asked him to send an ambassador to La Paz. The current ambassador reports to President Nicolas Maduro, who has rejected her claim to the presidency saying it lacked the necessary quorum.

From the start, Anez has tried to set herself apart from Morales. Wearing the presidential sash of office, she greeted supporters at an old presidential palace Tuesday night instead of the modern 26-story presidential office with a heliport that was built by Morales -- a project his foes called one of his excesses.

She also carried a Bible, which had been banned by Morales from the presidential palace after he reformed the constitution and recognized the Andean earth deity Pachamama instead of the Roman Catholic Church.

But even many supporters eventually grew weary of his long tenure in power -- as well as his insistence on running for a fourth term despite a public referendum that upheld term limits. Bolivia's high court, which critics contend was stacked in his favour, threw out the limits. Anez said Wednesday she would seek to have the 2016 court ruling overturned to keep Morales from running in the next election.