Canada goose found with explosive taped to its body 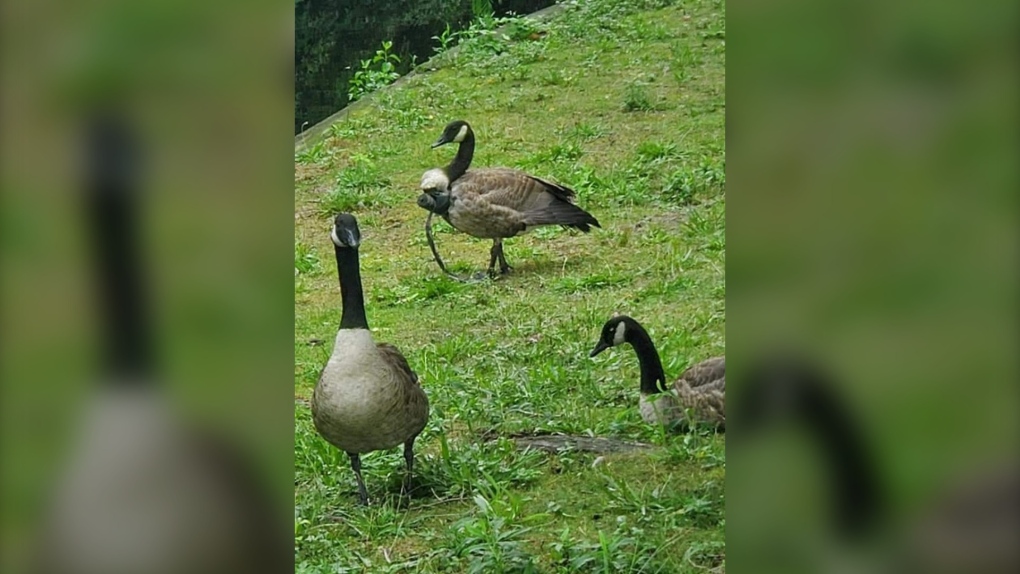 John DiLeonardo found a Canada goose with a firecracker duct-taped to its chest at Silver Lake Park in Baldwin, N.Y. (Long Island Orchestrating for Nature/Facebook)

TORONTO -- A Long Island, N.Y. man has saved a Canada goose after finding the bird with an explosive device taped to its chest.

John DiLeonardo, who is a member of People for the Ethical Treatment of Animals (PETA) and Long Island Orchestrating for Nature (LION), told WPIX-TV that he rescued the bird after spotting it on Friday at Silver Lake Park in Baldwin.

"I'm sure she was very trusting before this cruel person strapped this firecracker to her," DiLeonardo said.

The explosive did not explode and it was safely removed from the bird.

According to a post on its Facebook page, LION said the firecracker appeared to have been lit but was soaked in water. DiLeonardo speculates that when the perpetrator lit the fuse, it scared the goose, causing it to run into the water.

"She would be dead and so would her flock mates as well," DiLeonardo said

Di Leonardo said the bird was injured by the tightly wrapped duct tape around its body and was immediately taken to a vet after it was captured and the explosive was removed.

The goose was treated and released back into the lake on Friday night.

DiLeonardo said he is worried that the person who attempted to kill the bird might try and harm another animal. He also fears that the suspect’s behaviour may escalate.

"The FBI, medical professionals, the police department have all well documented the link between animal abuse and human violence, so it’s only a matter of time before this person escalates and harms another animal or a person," DiLeonardo explained.

LION and PETA are offering a reward of up to US$5,000 to anyone with information that could lead to an arrest.