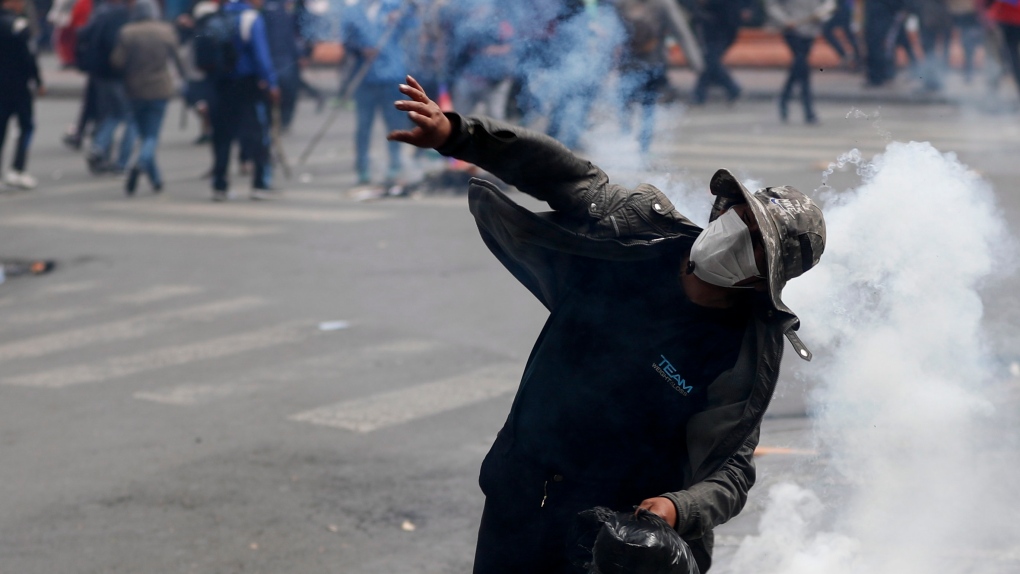 LA PAZ, Bolivia -- Bolivia's interim leader said Evo Morales can't run as a candidate in any new elections, even as the ousted leader contended he is in fact still the president of the Andean country since its Legislative Assembly has yet to accept his resignation.

Bolivia was headed into uncharted territory Friday with lawmakers trying to reach a deal for new elections, protests raging in parts of the country and rival claims to the presidency.

Morales stepped down on Sunday at military prompting, following nationwide protests over suspected vote-rigging in an Oct. 20 election in which he claimed to have won a fourth term in office. An Organization of American States audit of the vote found widespread irregularities.

"If they haven't accepted or rejected (his resignation), I can say that I'm still president," he said in an interview with The Associated Press Thursday in Mexico, where he has been granted political asylum.

Morales called for the United Nations, and possibly Pope Francis, to mediate in the nation's political crisis following what he called a coup d'etat.

In Bolivia, thousands of his supporters of demonstrated for his return from Mexico.

"Evo: Friend, the people are with you!" shouted protesters in the town of Sacaba.

They had come overnight from Chapare, a coca-growing region where Morales became a prominent union leader before he became Bolivia's first indigenous president. Soldiers blocked them from reaching the nearby city of Cochabamba, where Morales' supporters and foes have clashed for weeks.

Many protesters waved the national flag and the multicolour "Wiphala" flag that represents indigenous peoples.

In the capital of La Paz, some gasoline stations ran out of supply because of street blockades in the nearby city of El Alto, a pro-Morales stronghold that is a major distribution point for fuel.

Jeanine Anez, a Senate deputy leader who claimed the interim presidency, was moving to establish authority in the turbulent country. She announced that Morales could not participate in elections again and criticized Mexico's government for allowing Morales to rally support from Mexico City.

"We have to let the Mexican government know that cannot be happening," Anez said.

Mexico, however, said Morales has a right to make political statements.

"Asylum recipients' freedom of expression should not be subject to any greater limitations than those that would apply to any Mexican citizen," Mexico's foreign relations department said.

Much of the opposition to Morales sprang from his refusal to accept a referendum that would have forbidden him from running for a new term.

In the wake of Morales' resignation, it was unclear whether Bolivian election officials would have to formally bar him from running in a new election.

The pro-Morales Movement Toward Socialism party "has all the right to participate in elections, they can look for candidates," Anez said.

Further confusion was created over fresh elections on Thursday. Some lawmakers from Morales' Movement Toward Socialism party and legislators from Anez's interim government said they struck a political agreement to bring peace to the country and pave the road to a new vote in 90 days. The deal came after Eva Copa Murga of Morales' party was confirmed as senate president with the backing of lawmakers in Anez's Democratic Unity party.

Copa Murga called it "a historic day." Some lawmakers, however, denied that a deal had been reached.

Bolivia's new interim government has begun winning some international recognition but faced challenges to its legitimacy at home.

Members of the Movement Toward Socialism party, who dominate both houses of Congress, held legislative sessions aimed at questioning the legitimacy of Anez, who had been no higher than fifth in the line of succession before Morales resigned. She won recognition because those above her, all Morales backers, also resigned -- though some later tried to recant their resignations.

In addition to accusing Morales of inciting violent dissent, the new government took aim at some of his allies at home.

Anez's new interior minister, Arturo Murillo, said Wednesday that he had spoken with police and ordered a hunt for his predecessor, Juan Ramon Quintana -- using the Spanish word for hunt that applies to chasing an animal.

"Why is it a hunt? Because he is an animal who is killing people," Murillo said.

Anez needs to win recognition from more Bolivians, stabilize the nation and organize new elections within 90 days, rebuilding after weeks of violent protests against Morales following the disputed election.

"If this is seen by the indigenous social movement as an effort by the old elite to restore the old order in Bolivian society, I think that is a recipe for tremendous political conflict," said Kenneth Roberts, professor of government at Cornell University in Ithaca, New York.

U.N. Secretary-General Antonio Guterres is sending a personal envoy to Bolivia to support efforts to find a peaceful solution to the crisis.

The new envoy, Jean Arnault, was travelling to Bolivia on Thursday, according to U.N. spokesman Stephane Dujarric.

In Brazil, Russian President Vladimir Putin said at a meeting of the BRICS group of emerging economies that the situation in Bolivia is alarming.

"They have no leadership at all. It's similar to the situation in Libya, though there is no direct armed intervention. However, the country is close to chaos," Putin said.

The interim government on Thursday gave journalists a tour of a 29-story presidential office building with a heliport built by Morales and that his foes have criticized as one of his excesses. The empty presidential suite on the 24th floor contained a wall painting showing leaders including Nelson Mandela and Fidel Castro; a reading room with several biographies about Morales; a few items of clothing in the main bedroom; and a jacuzzi.

Morales upended politics in this nation long ruled by light-skinned descendants of Europeans by reversing deep-rooted inequality. The economy benefited from a boom in prices of commodities and he ushered through a new constitution that created a new Congress with seats reserved for Bolivia's smaller indigenous groups while also allowing self-rule for all indigenous communities.

Although some supporters became disenchanted by his insistence on holding on to power, Morales remains popular, especially among other members of his native Aymara ethnic group.