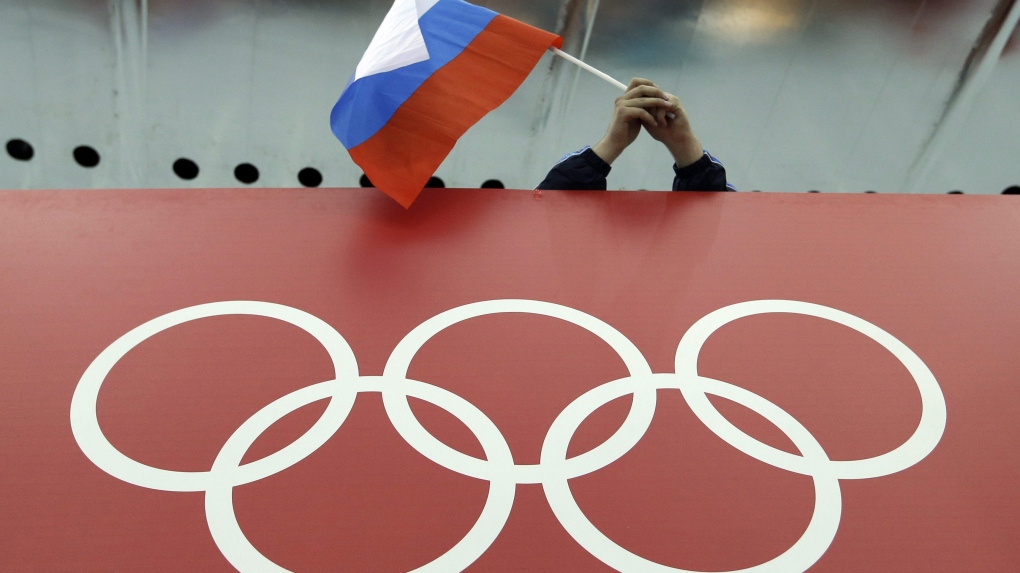 A Russian skating fan holds the country's national flag over the Olympic rings before the start of the men's 10,000-metre speedskating race at Adler Arena Skating Center during the 2014 Winter Olympics in Sochi, Russia on Feb. 18, 2014. (AP Photo/David J. Phillip)

The Court of Arbitration for Sport is preparing a hearing expected within weeks in Switzerland.

The court said on Tuesday it would ask Russian officials from the anti-doping agency known as RUSADA for their consent. Both parties in a case must agree before media can be invited in and proceedings are streamed online.

"If a consensus exists in favour of a public hearing, CAS will almost certainly validate that choice," the court's secretary general, Matthieu Reeb, said in a statement.

Urged on by President Vladimir Putin, RUSADA has formally challenged a WADA ruling in December to declare the agency non-compliant after key data from the Moscow testing laboratory was corrupted.

Russia handing over the Moscow lab's doping data archive in January 2019 was meant to be a key step to resolving the years-long saga of state-backed doping that has tainted the Olympic Games since 2008.

Instead, it provoked a fresh wave of allegations with new evidence of apparent tampering and coverups by Russian state authorities of potential doping cases implicating hundreds of athletes.

"It is WADA's view -- and that of many of our stakeholders -- that this dispute at CAS should be held in a public forum to ensure that everybody understands the process and hears the arguments," the Montreal-based agency's director general, Olivier Niggli, said in a statement.

The CAS panel of three judges will have power to enforce WADA-recommended sanctions during a four-year period including a ban on Russia's team name, flag and anthem at Olympic Games and world championships.

WADA also wants Russian athletes to compete as neutrals at the Olympics and major events only if they pass a vetting process which examines their history of drug testing and possible involvement in lab coverups of positive tests.

Russia could also be blocked from bidding to host major championships, and stripped of some events it was already awarded, during the punishment period.

CAS hearings can be opened to media and public observers in some cases when both parties consent.

Evidence was heard over almost 10 hours in a lakeside hotel ballroom at Montreux, Switzerland, with media and other accredited observers in the hall, and proceedings streamed live on the court's website. A verdict is expected this month.

It was unclear if the WADA vs. Russia case fitted the limited scope of CAS cases which can be heard in public.

While the Sun Yang case is a more traditional appeal in a disciplinary case involving a single athlete, the latest Russian case is an arbitration dispute between two institutions.

Data from the lab shuttered by WADA and long sealed by Russian security agencies was demanded in exchange for the anti-doping watchdog's sanctions against RUSADA being lifted in September 2018.

However, WADA investigators found evidence Russia edited the data in the weeks before the handover to remove signs of failed drug tests, and detailed an apparent attempt to smear former lab director Grigory Rodchenkov. He has become a key witness for WADA since leaving Russia to enter a United States witness protection program.

Russia produced its own report arguing that any editing was the result of illicit changes made from abroad, or the instability of the lab software.

A verdict in the CAS process is due in May, about two months before the Tokyo Olympics begin.