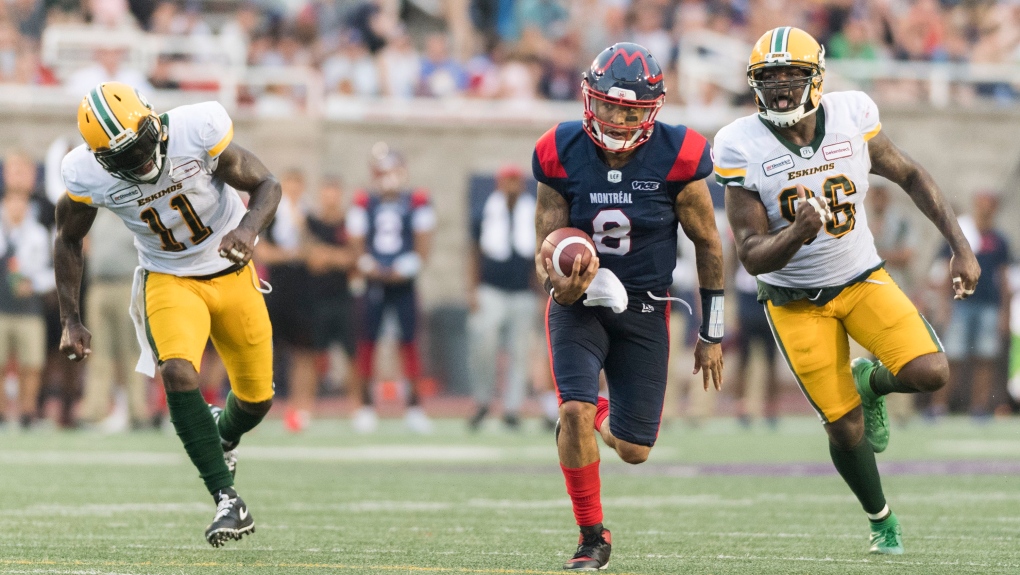 That one play set the tone for the entire encounter as the Alouettes (3-2) marched to a convincing 20-10 victory over the visiting Edmonton Eskimos (3-2) in humid and hot conditions on Saturday.

The Alouettes have a winning record for the first time since the opening game of the 2017 season.

"You have to have guts to make that call and Khari is that guy," said Adams, who completed 15-of-22 passes for 191 yards. "You saw it when he was playing back in the day and you see it in his play calls now. He's not holding back for anybody."

With wide receivers B.J. Cunningham and DeVier Posey out injured, the Alouettes needed to get creative on offence against the league's stingiest defence. Enter Montreal's version of the Philly Special.

With the home team knocking at the door at Edmonton's 21-yard line, Jones called a play that Montreal had only practised once before.

Adams took the snap, handed the ball off to running back William Stanback, who reversed it to Eugene Lewis. The receiver then found Adams near the end zone for the touchdown to open the scoring at 9:14 of the first quarter to cap off a 74-yard drive.

It turns out Lewis had played quarterback in senior year of high school and Adams was a receiver in his sophomore year.

"It's a Philly Special," said Lewis, who made five catches for 69 yards. "That's not the exact name that we use but I came here today wearing my Allen Iverson jersey. I'm from Philly and that's what it is. Meant to be.

That play was the ultimate sign of an Alouettes team growing in confidence since losing the first two games of the year, including the season opener to the Eskimos 32-25. Montreal is on its first three-game winning streak since the end of the 2016 season.

"We are for real right now," said coach Jones. "Whether it's a message or not, I want our guys to know we're for real and we're going to come to play every week. We're building that mentality week by week and the guys are starting to believe it."

It looked like Edmonton had tied the game late in the first half when QB Trevor Harris connected with Kenny Stafford in the end zone but the play was brought back for holding on Colin Kelly. The Eskimos settled for another field goal.

Edmonton finished the game with 80 yards of penalties.

"Overall we have to clean things up," said coach Jason Maas. "That's not winning football. It's hard enough as it is to win on the road, but when you're not helping the cause, it's troubling."

Whyte cut the deficit to 10-9 early in the third quarter with a 48-yard field goal -- the kicker's 17th consecutive successful field goal.

The Als responded when Adams found Jake Wieneke in the end zone for the five-yard score at 10:15 of the third to make it 17-9.

Bede made it 20-9 with his second field goal with 9:50 left in the game before Whyte added a single.

Harris went 29 for 43 for 271 yards and two interceptions, ending a streak of 228 consecutive passes without a pick. Edmonton has lost two of its last three games.