Sabres' Kane expects to be dealt before NHL trading deadline 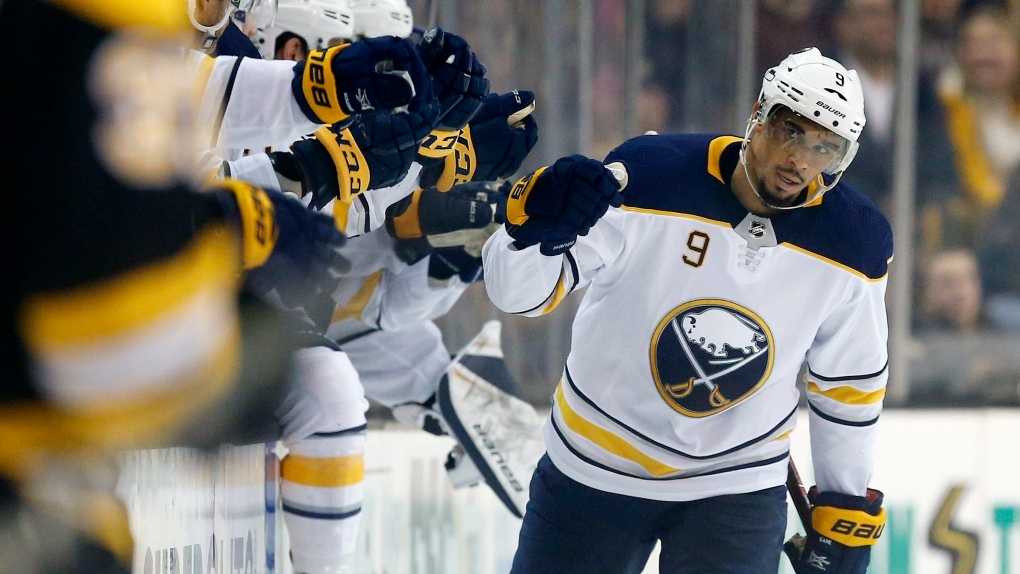 In this Feb. 10, 2018, file photo, Buffalo Sabres' Evander Kane (9) celebrates his goal during the second period of an NHL hockey game against the Boston Bruins, in Boston. (AP Photo/Michael Dwyer, File)

BUFFALO, N.Y. -- Sabres forward Evander Kane doesn't need a fortune teller to understand he's down to his final days in Buffalo when acknowledging he expects to be dealt before the NHL's trading deadline on Monday.

The only uncertainty for Kane is when the trade will take place and where he'll be headed.

"I think the hardest part is the unknown," Kane said, in preparing to join the Sabres for a two-game road trip starting at Detroit on Thursday. "I'm going to play as hard as I possibly can tomorrow night. And then once the move is made, then we can reflect for that day. But I've got a job to do."

The 26-year-old is expendable for a variety of reasons, starting with his contract which runs out after this season. The Sabres are rebuilding under a new regime, headed by first-year general manager Jason Botterill, and the team has expressed no interest in re-signing Kane, who is expected to command a hefty price tag in free agency this summer.

Kane's 19 goals in 60 games rank second in Buffalo. He's scored 20 or more in each of his previous two years since being acquired by the Sabres in a multi-player trade with Winnipeg in February 2015.

The 26-year-old is in his ninth NHL season after being selected No. 4 by the then-Atlanta Thrashers in the 2009 draft.

The Sabres are on the outside looking in. They sit last in the East and are all but mathematically assured of extending their longest playoff drought to a seventh season.

Also on the block in Buffalo are goalie Robin Lehner, forward Benoit Pouliot and defenceman Josh Gorges, all of whom are in the final year of their contracts.

Coach Phil Housley is braced for a roster shake up and focused solely on preparing his team to play.

"Number 1 is getting ready for Detroit," Housley said. "That's what we control is to get our players ready. And Jason (Botterill) is going to do the best job he can moving forward here."

Kane's pending departure marks a dramatic setback for a franchise that under former GM Tim Murray pinned its hopes on him being part of its long-term future after finishing last in both 2013-14 and 2014-15 seasons.

Murray dealt defenceman Tyler Myers, forward Drew Stafford, two prospects and a first-round pick in acquiring Kane, defenceman Zach Bogosian and prospect goalie Jason Kasdorf. And it made no difference to Murray that Kane would miss the final two months of the season after having shoulder surgery.

Though Kane has produced on the ice when healthy and been active in working with Buffalo-area charitable groups, he has been questioned for his immaturity off the ice.

Kane has had two legal run-ins, including being arrested for grabbing three women by the hair and neck during an altercation at a Buffalo bar in June 2016. The charges were eventually dismissed on condition Kane stayed out of trouble as part of a plea agreement in which a prosecutor described the player's behaviour as "arrogant, boorish and surly, but not criminal."

Earlier in the year, the Sabres suspended Kane for one game for missing practice a day after pictures surfaced on social media of the player celebrating in Toronto after attending the NBA All-Star Game.

NOTES: Center Jack Eichel was spotted carrying a stick and walking without a protective boot for the first time since spraining his right ankle in a 4-2 win at Boston on Feb. 10. Housley had no update on Eichel's status. ... G Robin Lehner will start against Detroit after missing one game with a hip injury.