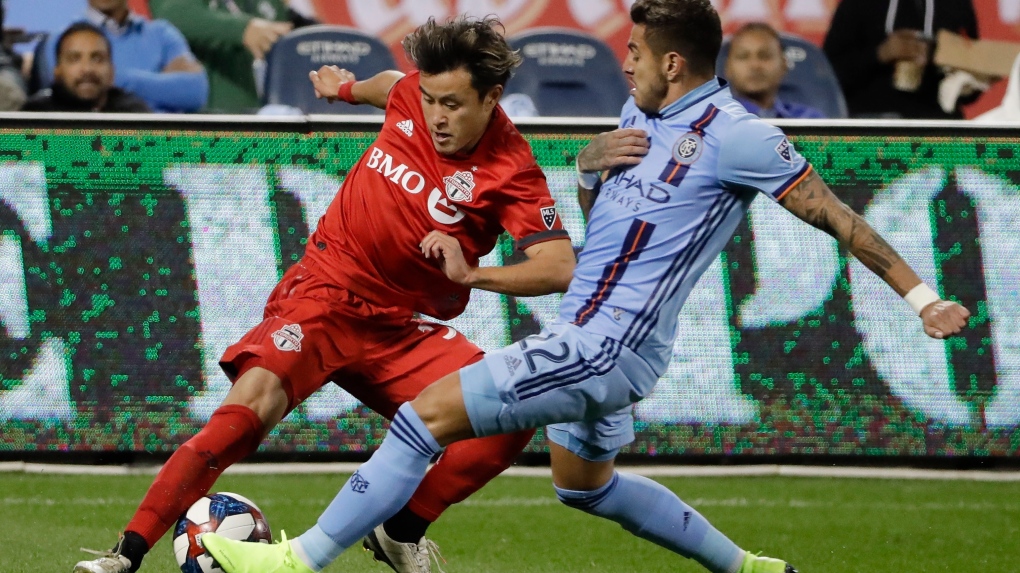 NEW YORK -- Toronto FC moved within one win of returning to the MLS Cup final for the third time in four years with a dramatic 2-1 victory over New York City FC in the Eastern Conference semifinal Wednesday.

Alejandro Pozuelo, with his second goal of the night, converted a 90th-minute penalty to give Toronto the win. Fullback Ronald Matarrita took Richie Laryea down in the 88th minute as the substitute slashed his way into the penalty box and Pozuelo nonchalantly slotted the spot kick down the middle.

Fourth-seeded Toronto will play either at No. 2 Atlanta or No. 3 Philadelphia, who meet Thursday at Mercedes-Benz Stadium, in the conference final Oct. 30.

"Listen, at the end of (Thursday) night there'll be four teams left. Four teams that get to still train and play real games," said Toronto captain Michael Bradley. "And we're one of them. And that part's exciting."

For Bradley, Wednesday's win was another sign of Toronto's steely mentality.

"We've played on as many big days in the last few years as any team in this league and we have guys who understand what these nights are about. And it showed."

Toronto coach Greg Vanney, who again looked like he had just stepped off a Milan runway in a suit and saucy scarf, also likes what he sees.

"The mentality is really strong on this team. The work rate is really strong there, the quality is there. They believe in themselves. And anything's possible when all those things fit together," he said.

While Toronto dominated a scoreless first half and went ahead early in the second, it had to survive a furious fightback from the second-best team in the league during the regular season.

NYCFC will rue the mistakes that led to both Toronto goals. TFC will point to a battle-hardened spirit that helped the team to an extra-time 5-1 win over D.C. United in its playoff opener last Saturday.

Despite that, everything had seemed in NYCFC's favour going into the game.

The New Yorkers were healthy and had been off since the regular-season finale Oct 6. And they had home-field advantage, albeit not in the baseball stadium they normally play in with the contest shifted to Citi Field from Yankee Stadium because of the baseball playoffs.

Toronto, in contrast, was playing on three days' rest with star striker Jozy Altidore still nursing a quad strain. Centre back Omar Gonzalez, who like Altidore missed the D.C. game, was recovered enough from his hamstring issue to make the bench Wednesday but did not see the field.

Despite Altidore's absence, Toronto was more creative in front of goal but failed to reap the rewards in the first half. That changed in the 47th minute when NYCFC got an attempted clearance deep in its own half horribly wrong.

Toronto's Brazilian fullback Auro hoofed the ball into the NYCFC end after a throw-in and the home side tried to clear the ball with three headers that went from bad to worse to complete disaster.

Defender Maxime Chanot, a French-born Luxembourg international, committed the final gaffe with an attempted back-header to goalkeeper Sean Johnson that went straight to Pozuelo, who accepted the gift and then beat Johnson with a left-footed shot.

New York went into high gear after the goal and pulled even in the 69th minute.

After a NYCFC throw-in in the Toronto end, Maximiliano Moralez sent a cross to the far post and spotted Ismael Tajouri-Shradi making a late run. Jonathan Osorio tried to get to the unmarked Tajouri-Shradi but was too late as the Swiss-born Libyan international beat Quentin Westberg.

The game tied 1-1, Toronto weathered the rest of the storm and Pozuelo's penalty sealed the deal. The Spaniard now has four goals against NYCFC this season and has gone 2-of-3 from the penalty spot against the New Yorkers.

Westberg made a diving save in stoppage time off Argentine forward Valentin Castellanos to preserve the win.

Toronto started aggressively with NYCFC looking a little rusty while searching for counter-attack possibilities. New York began to work its way into the match, only to see the chances go Toronto's way as the visitors turned the screws on offence.

Pozuelo forced a diving one-handed save from Johnson with a right-footed strike in the 15th minute. Nicolas Benezet then shot just wide in the 20th minute.

NYCFC caught Toronto off guard in the 29th minute on a quick free kick that found Castellanos all alone. But Westberg made the save on the New Yorkers' only shot on target in the first half.

Referee Jair Marrufo came in for a torrent of boos in the 30th minute when NYCFC's Alexandru Mitrita was shown a yellow card on a play where Benezet seemed to tumble on his own. Johnson bobbled the ensuing Pozuelo free kick from outside the box but eventually got a handle on the ball.

Johnson made a splendid reflex save in the 37th minute to deny Osorio after a slick buildup by Toronto.

The goal lit a fire under NYCFC which came hard at Toronto. Castellanos shot just wide in the 58th minute.

New York outshot Toronto 17-9 although the shots on target were even at seven apiece.

Celebrations could be heard from inside the Toronto dressing room before the doors were opened to the media. Vanney hugged his family outside. Some players nursed a can of beer.

The game was moved some 12 kilometres from Yankee Stadium to Citi Field, home of the Mets, because of the Yankees' playoff run. The Yankees were eliminated by Houston on Saturday but the decision to shift the MLS contest had already been made.

It marked the second time NYCFC has played at the 42,000-capacity Citi Field. NYCFC played Columbus to a 2-2 draw there in the 2017 regular-season finale.

One goal was on the third base line with the other in right-centre field, with home plate, the pitching mound and first base out of the field of play. Grass covered the part of the baseball infield that was in play.

The dimensions mirrored the tight fit at Yankee Stadium, with a stiff breeze also factoring in.

NYCFC bunting and electronic displays helped the home-town soccer flavour although the Let's Go Mets sign on the main scoreboard was hard to miss. The protective netting behind home plate was also still up.

Announced attendance was 19,829. NYCFC averaged 21,107 at Yankee Stadium this season, ninth best in the league.

Toronto lost the 2016 MLS Cup final in a penalty shootout loss to Seattle. The Reds avenged that loss by winning the championship in 2017, but then missed the playoffs in 2018.