Patriots back at work, day after 5th player tested positive 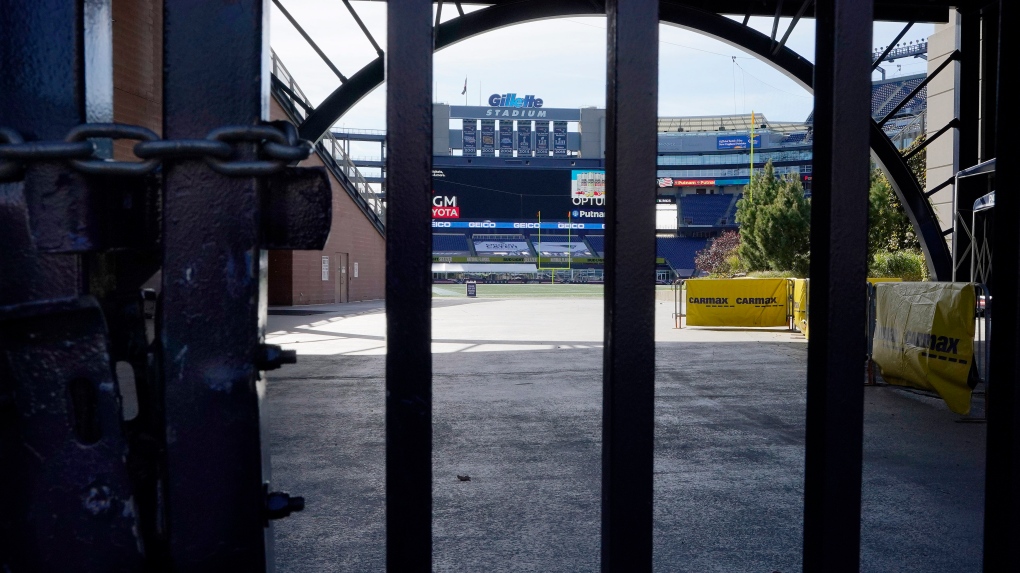 The Gillette Stadium logo, behind, stands above an empty field at the stadium that is home to the New England Patriots football team, Sunday, Oct. 11, 2020, in Foxborough, Mass. The NFL has postponed the Denver Broncos-New England Patriots game due to another positive coronavirus test with the Patriots. (AP Photo/Steven Senne)

The New England Patriots went back to work Saturday, one day after a fifth player tested positive for COVID-19 and one day before their twice-postponed game against Denver.

A Patriots spokesman said the team would proceed with its walkthrough, but all meetings would be virtual. There was no word on any Saturday testing.

The Broncos had coronavirus news of their own Saturday. Running backs coach Curtis Modkins has tested positive and won't make the trip to New England. He is in isolation and has no symptoms.

The game against the Broncos, originally scheduled for Oct. 11 and then pushed back one day, was rescheduled for Sunday at 1 p.m. after a fourth positive test.

Elsewhere, the Jacksonville Jaguars said Saturday a practice-squad player tested positive. The initial result was confirmed by a second test Friday evening. The player was quarantined, and the team is reviewing contact tracing data to determine what further precautions need to be taken.

Jacksonville held its football activities remotely Saturday as part of NFL protocols. It could benefit the team that it typically separates practice-squad players from those on the 53-man roster, creating an extra level of protection to help prevent an outbreak.

The Jaguars are the fourth NFL team to deal with COVID issues in recent days, joining Atlanta, Indianapolis and New England.

The Colts had four positive tests that came up negative upon retesting. The Falcons returned to their facility one day after abandoning it because of a second positive.

Gilmore, the reigning Defensive Player of the Year, and Newton returned to practice this week for the first time since testing positive for the virus. Newton missed New England's loss at Kansas City on Oct. 5 after his Oct. 2 positive test. He was activated from the reserve/COVID-19 list on Wednesday. Gilmore, who tested positive on Oct. 7, was activated from the list Thursday. Practice-squad player Bill Murray also returned from the COVID-19 list Thursday.

Defensive tackle Byron Cowart, who tested positive on Oct. 11, was joined on the list by Ferentz.

The Broncos haven't played since Oct. 1. If they play Sunday, they'll have had 16 days between games, one day longer than Tennessee's layoff before the Titans beat Buffalo on Tuesday night following the NFL's first COVID-19 outbreak, which affected two dozen members of the organization.

Denver's layoff is the longest in the league since 2001, when the NFL postponed all games on the weekend following the 9-11 terrorist attacks. Three teams -- the Saints, Steelers and Buccaneers -- had byes when play resumed a week later, so they all had 20 days between games that year. Of those three, only the Steelers won in their return to action.

Indianapolis closed its practice facility, then the four retests came back negative and the building reopened.

The Browns, who played the Colts on Sunday, had zero positive tests Friday and their their building was open. Star receiver Odell Beckham Jr., who was ill and sent home Thursday and not allowed to practice Friday, had his second negative test in 24 hours. That clears him play Sunday at Pittsburgh

Falcons rookie defensive tackle Marlon Davidson was placed on the reserve/COVID-19 list Tuesday and a second person, who is not a player, subsequently tested positive.

The Panthers placed guard/centre Tyler Larsen on the reserve/COVID-19 list five days after he played against Atlanta.