Ovechkin vs. Laine vs. Malkin: NHL stars race to 50 goals 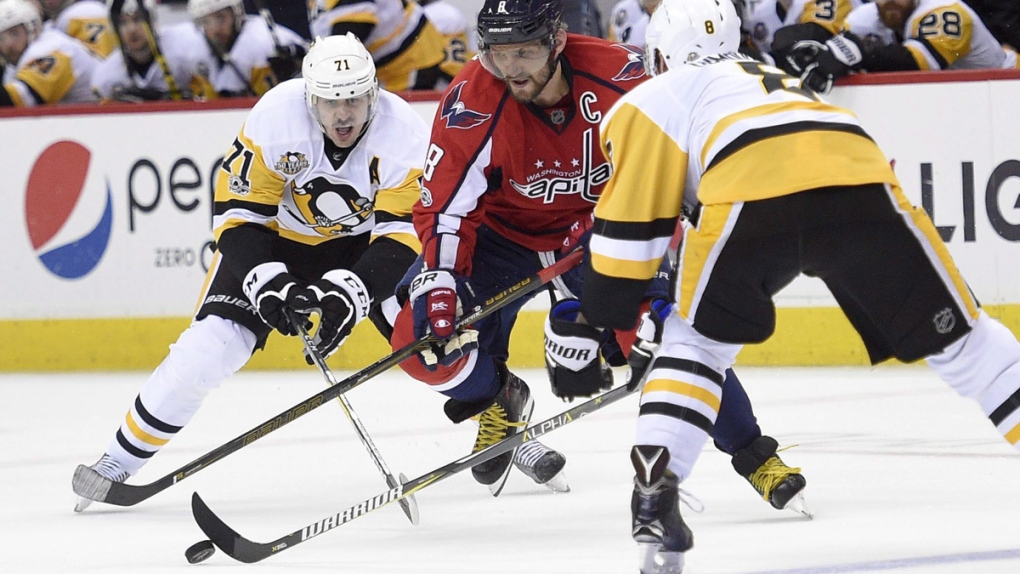 The Winnipeg Jets winger might not keep track of each time Alex Ovechkin or Evgeni Malkin scores, but he knows how many goals they have.

"I just sometimes look at the scoreboard and the score sheets," Laine said. "I always pretty much know where's everyone at."

Laine is tied with Ovechkin at 40 goals atop the NHL and is looking to reach 50 for the first time in his career at age 19 and win his first Rocket Richard Trophy. Ovechkin, at 32 years old, is 10 away from his eighth 50-goal season and could win his seventh goal-scoring title.

The race comes down to Ovechkin and Malkin -- the Nos. 1 and 2 picks from 2004 -- and Laine, the second selection in 2016 who has shown he deserves to be in the conversation for the best goal-scorer in hockey today.

"He's got a gift for scoring goals," Jets defenceman Ben Chiarot said. "Guys look for him now. It's even more profound that you look for him in the offensive zone because if he gets the puck -- it's crazy to say -- it's like a 60, 70 per cent chance he's going to put it in the back of the net. I've never played with anyone like that -- that dangerous, that lethal."

Winnipeg teammates aren't shy to say Laine's abilities are "Ovechkin-like" because Laine is scoring as a teenager the way only the Washington Capitals superstar, Steven Stamkos, Auston Matthews and Ilya Kovalchuk have over the past two decades. Ovechkin is no doubt the greatest goal-scorer of this generation, now two away from being the 20th player in NHL history to reach 600, though coach Barry Trotz thinks 50 is a more important milestone for his Russian winger given his recent trajectory.

"The 600 will be something he'll have forever, but I think he'll put a lot of pride if he can get 50 this year," Trotz said. "I think the way he looks at it, it's so hard to do and he had a down year (last season). He wants to show that he can still do it."

Even if one big number is more meaningful than the other, Ovechkin knows that to get to 50 this season he has to cross the 600-goal threshold. After notching the 598th of his career and 40th of the season, Ovechkin said: "Forty is nice, but 50 is better. Still have time to do that."

Laine has time to do that because he has gone on an absurd tear: 15 goals in his past 11 games going into his showdown with Ovechkin on Monday night in Washington. The most prolific young Finn since Teemu Selanne said winning the Rocket Richard Award has always been a dream, and now 50 is even in reach.

"You never know what's going to happen," Laine said. "Ten games ago, I was at 25 and nobody was talking about even 40. There's a lot of things that could happen. If we're playing like this with (linemates Nikolai Ehlers and Paul Stastny), why not?"

With 14 games to go, there's no reason to bet against Laine or Ovechkin scoring 50.

Ovechkin already has seven more than he put up all last season to get to 40 for the ninth time. Only Hall of Famers Wayne Gretzky, Mario Lemieux and Marcel Dionne have scored 40 in a season more times than Ovechkin.

"I don't think people understand how hard that is to do," Toronto Maple Leafs centre Nazem Kadri said. "He makes it seem so effortless. He's got a very special shot."

Jets centre Andrew Copp wondered if Laine's shot is even more special than Ovechkin's. Copp hasn't seen Laine score from the centre red line yet but joked, "I'm sure that day will come."

The day has already come when Laine's release looks more effortless than Ovechkin's.

"Ovi's got a big, winding up wrister and it comes off just kind of so crazy whereas Patty, it's almost like he's throwing darts at the net," Chiarot said. "It's just a little flick of the wrist and it's kind of where he wants it. ... I think it's the most dangerous shot in the league."

Playing on the same team as Sidney Crosby could leave Malkin as underappreciate at times, but he's playing some of the best hockey of his career right now.

"I have confidence right now," Malkin said recently. "It's like every shot goes in. It's funny sometimes. I'm trying to do my best."

Jets coach Paul Maurice senses the confidence oozing from Laine just from watching him at practice. He can see an entirely different player from a month ago and someone who's scoring like a player who looks capable of hitting -- and surpassing -- 50.

"If you're getting close to 50, you're feeling good about your game," Maurice said. "Any of these guys, confidence is a critical piece. That puck is off Patty's stick where he wants it right now every time. So he's feeling it, he's feeling good."