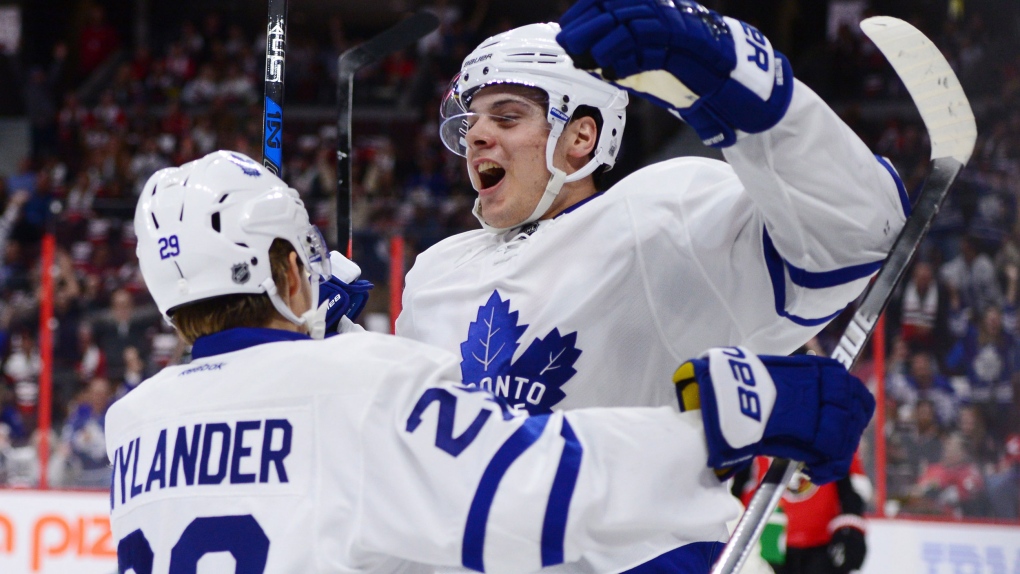 TORONTO -- Morgan Rielly enjoys seeing Pittsburgh Penguins stars Sidney Crosby and Evgeni Malkin spin their magic -- when the Toronto Maple Leafs defenceman isn't on the ice trying to contain them, that is.

"Watching those guys when they're playing really well is great," Rielly said. "The way they play the game, the way they move the puck and create offensive opportunities for their linemates ... it's about as good as it gets.

"Playing against them is tough, but it's a good test for our team looking to bounce back."

And bounce back is exactly what Toronto will be trying to do when the two-time defending Stanley Cup champion Penguins visit Air Canada Centre on Saturday.

The Leafs limped home off a disappointing four-game road trip -- a slide preceded by victories in nine of their previous 10 -- that culminated with Monday's 5-3 loss in Buffalo to round out a 0-2-2 stretch where they surrendered a combined 16 goals against.

But with four days to get ready for a Pittsburgh attack that has averaged an NHL-high four goals a game in 2018, the Leafs won't have any excuses when it comes to rest or preparation.

"We've been sliding a little bit, and I think now's a good time to get back on track," Toronto centre Nazem Kadri said. "Just being able to try to play our best hockey and move things in the right direction to where we want to be come playoff time.

"These guys are contenders, are every year, and we're certainly going to try to make it hard on them."

One big hole that remains is down the middle, where it looks like the Leafs will once again be without star centre Auston Matthews

Sporting a red non-contact jersey, the 20-year-old skated on his own prior to Friday's practice before briefly joining the main session, but left for the locker-room about 10 minutes later.

Matthews injured his shoulder after getting sandwiched by two Islanders in Toronto's 4-3 shootout victory over New York on Feb. 22.

"He's progressing," Leafs head coach Mike Babcock said. "What does that mean? I don't know the answer to that.

"When he's ready, he'll let us know. Ideally we'll have him more than ready as far as fitness goes."

Toronto currently sits third in the Atlantic Division -- it's difficult to see the Leafs moving up or down the standings at this point with 14 games left on the schedule -- while Pittsburgh appears to be hitting its stride at the right time after a somewhat bumpy start to the season.

The Penguins have the league's third-best record since Jan. 1 at 20-7-1 and are in a battle for top spot in the Metropolitan Division.

"It's a great team. Everybody's aware of that," said Leafs defenceman Ron Hainsey, who won the Cup with Pittsburgh last year. "We'll certainly have our work cut out for us."

The Penguins bolstered their lineup with the acquisition of Derick Brassard from Ottawa at the trade deadline, giving them a third offensive centre behind Crosby and Malkin.

"They've done a real nice job of creating depth," Babcock said. "They have a team that's built for this year. They're pushing hard to have success this year. It should be a lot of fun for us."

Notes: After playing the Penguins, the Leafs have another three-day break before hosting Dallas on Wednesday to start a stretch of three games in four nights. ... Saturday will mark the home debut of Toronto centre Tomas Plekanec. The 35-year-old was acquired from Montreal on Feb. 25 in a five-player swap, but with the Leafs on the road, he's only been in town for a couple of days. "You always get to know guys more on the road than at home," Plekanec said. "The schedule that we have right now is actually very favourable for myself ... I'm trying to settle in, trying to be familiar with all the stuff around and (start to) think just about hockey only."