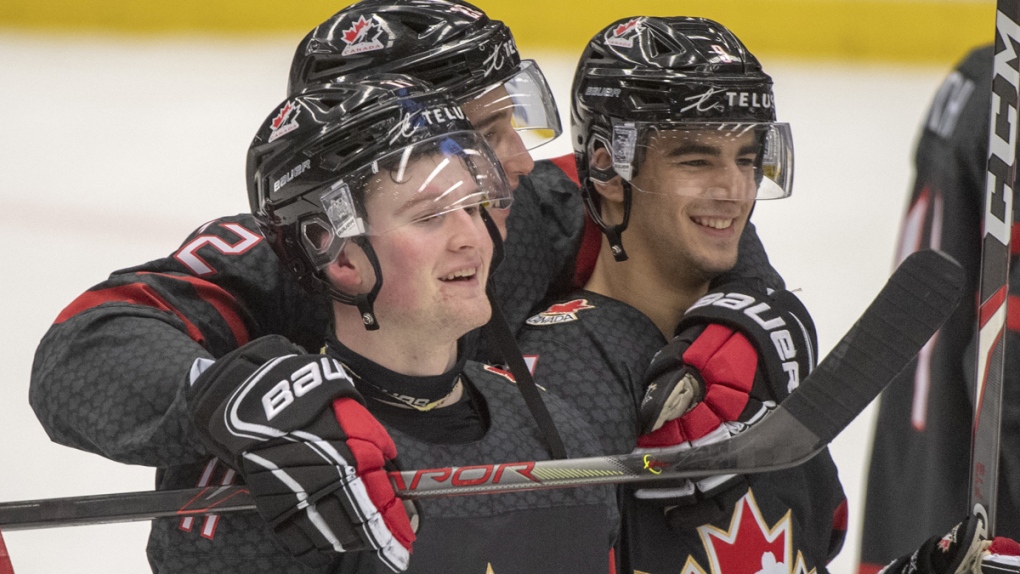 Alexis Lafreniere scored and added an assist in his return from injury as part of a resounding 6-1 victory over Slovakia in the quarterfinals on Thursday.

Lafreniere was back in the lineup after missing the last two games with a knee injury suffered in a humiliating 6-0 setback to Russia last Saturday, Canada's worst defeat in the under-20 tournament's 44-year history.

It was originally believed the Canadians would automatically get a rematch with the Russians, who beat Switzerland 3-1 earlier Thursday, in the semifinals. But they instead had to wait until later Thursday to find out their next opponent after the International Ice Hockey Federation recently changed its medal-round format -- and neglected to update the official website -- to a setup that sees teams reseeded after the quarters based on rankings at the event.

Lafreniere took up his usual spot on Canada's top line with Hayton and Nolan Foote only to see the latter assessed a five-minute major and a game misconduct for a check to the head on Slovakia's Kristian Kovacik just 53 seconds into the first period at Ostravar Arena.

Sporting their black jerseys for a second straight game, the Canadians managed to kill off the penalty, with Hofer making a big save off the rush, and then grabbed a 1-0 lead at 6:47.

Cozens, who replaced Foote on the No. 1 trio, pressured the puck on the forecheck and Lafreniere passed quickly in front to Hayton, who beat Hlavaj for his team-leading fourth goal of the world juniors.

Lafreniere's return to action looked to be in serious doubt a week ago as the projected No. 1 pick at the 2020 NHL draft and reigning CHL Player of the Year lay in agony on the ice after twisting his left leg on an awkward fall against Russia.

He had to be helped off by teammates, but the 18-year-old from Saint-Eustache, Que., who has 70 points in 32 games with the Rimouski Oceanic of the Quebec Major Junior Hockey League this season, watched practice less than 24 hours later minus a knee brace or noticeable limp.

He took part in Canada's skate Wednesday before the official all-clear was announced a few hours later.

Hlavaj -- statistically the QMJHL's best goalie in 2019-20 with the league-leading Sherbrooke Phoenix -- did his best to keep the Slovaks in it, but Canada scored four times in the middle period to put things out of reach.

The 17-time gold medallists added a sixth one minute into the third on another man advantage when Hayton buried his fifth.

That spelled the end of the afternoon for Hlavaj, who was replaced by Samuel Vyletelka.

Okuliar, who plays on the same line as Cozens with the WHL's Lethbridge Hurricanes, broke the shutout bid at 6:10 when he blasted a shot past Hofer.

Without a point in the tournament, 17-year-old Quinton Byfield, who's expected to go high at June's draft, hit the post midway through the third.

Canada finished atop Group B with a 3-1 record, while Slovakia's only victory in Group A was a 3-1 triumph over Kazakhstan.

The Slovaks lost their other three round-robin games by a combined 21-5 scoreline -- 8-1 to Finland, 7-2 to Switzerland and 6-2 to Sweden.

Canada hasn't won the tournament in Europe since 2008, when the Czech Republic last hosted.

This report by The Canadian Press was first published Jan. 2, 2020