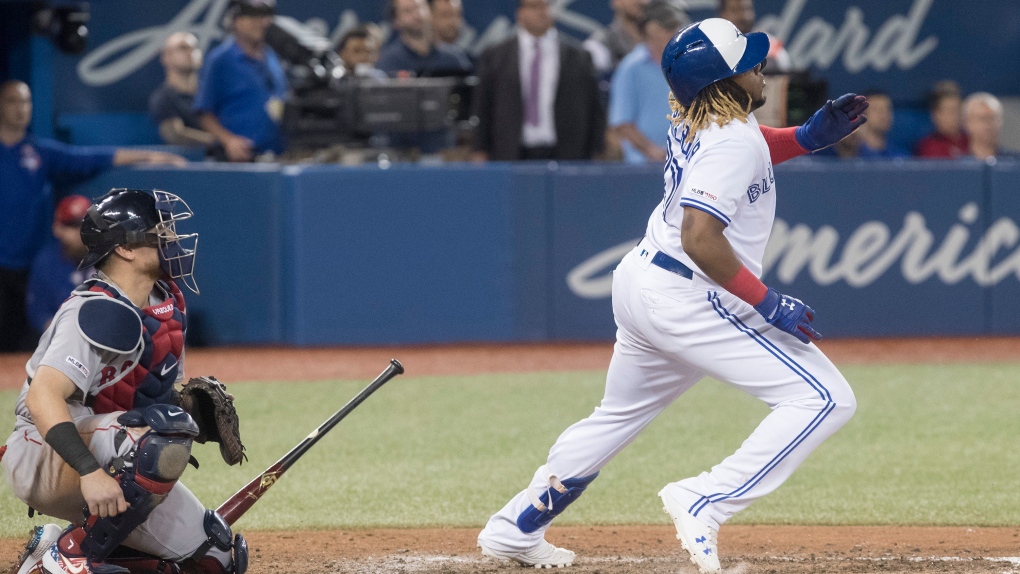 Jansen hit two solo blasts and added a ground-rule double but the Toronto Blue Jays still lost to the Boston Red Sox 8-7 on Thursday night. Jansen has six homers in his past seven games and hasn't struck out in his past 10 games.

Perhaps even more impressive is that the Blue Jays catcher has only missed a pitch once in that 10-game span.

"I guess you could say I'm pretty locked in," said Jansen, who had two home runs in 57 games before the current hot streak. "I've always considered myself pretty good at putting the bat on the ball.

"When I'm going well, when I'm not thinking about mechanics or anything like that, I've always been able to put my bat on the ball."

Eric Sogard tied it 7-7 for Toronto in the eighth, doubling to centre field to bring home Jansen, who had reached base on his double.

Pinch hitter Marco Hernandez, in for Red Sox catcher Sandy Leon in the top of the ninth, sent a line drive just over the outstretched glove of Blue Jays left-fielder Lourdes Gurriel Jr. to score the winning run.

Cavan Biggio and Justin Smoak walked in Toronto's half of the ninth, but Rowdy Tellez popped out and pinch hitter Vladimir Guerrero Jr. grounded out to end the game.

Michael Chavis's three-run blast capped off a six-run sixth-inning for Boston (46-41), and Rafael Devers had a solo shot of his own in the first.

Starting pitcher Hector Velazquez gave up three runs on five hits over 2 1/3 innings for the Red Sox. Colten Brewer came on in relief, allowing three runs in a 1 2/3 innings. Josh Taylor, Ryan Brasier and Matt Barnes all pitched scoreless innings before Brandon Workman (8-1) allowed a run but was the pitcher of record when Hernandez scored.

Freddy Galvis also had a homer for the Blue Jays (33-55). Derek Law was Toronto's "opener," against Boston on Thursday, with Thomas Pannone coming in afterward to work the middle innings.

The unusual setup was necessary after Marcus Stroman couldn't make his scheduled start because of ongoing issues with a cramp in his non-throwing shoulder.

The opener tactic didn't go as planned, with Law giving up a home run and a single in two-thirds of an inning. Pannone went 4 1/3 innings, allowing four runs. Tim Mayza followed him, giving up a pair of runs in Boston's six-run sixth inning.

Joe Biagini and Nick Kingham had scoreless innings of relief for the Blue Jays, before closer Ken Giles (1-2) came on in the ninth. It was the closer's third-straight appearance and he gave up Hernandez's game-winning run to take the loss.

"He just gave up a home run. Other than that, he was good," said Montoyo. "Gotta give credit to the other guy who took him deep, opposite field. He was fine."

The Blue Jays had built a solid 6-1 lead when Boston's Xander Bogaerts hit an RBI single with no outs in the sixth inning. The hit plated Mookie Betts and advanced Devers to third. In the next at bat, J.D. Martinez hit another single to score Devers and end Pannone's night with the score 6-3 for Toronto.

Mayza took the mound, inducing a pop fly by pinch hitter Eduardo Nunez to Jansen behind the plate.

But then Mayza's wild pitch allowed Bogaerts and Martinez to advance. He then walked Christian Vazquez to load the bases.

Galvis backed Mayza up with a smart sliding grab at short on Jackie Bradley Jr.'s sharply hit ball for a force out of Vazquez at second, but Bogaerts still crossed home on the play.

Chavis then came to the plate and took Mayza's 2-2 slider over the left-field wall to drive home Martinez and Bradley for a 7-6 Boston lead.

Notes: Stroman left in the fifth inning of Toronto's 7-5 win over the Kansas City Royals on Saturday when a cramp prevented him from continuing his start. Montoyo said before Thursday's game that Stroman is day to day and may not pitch again before Monday's all-star break. ... Announced attendance at Rogers Centre was 22,217.