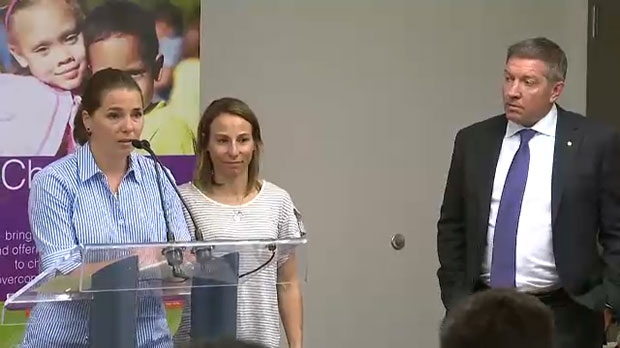 Genevieve Simard and Amelie-Frederique Gagnon are supported by Sheldon Kennedy as they share their story of abuse at a press conference in Calgary on June 8, 2018.

TORONTO -- Imagine a teacher telling a child: you're fat. You're a piece of crap. You're a waste of my time.

That kind of behaviour would never fly in the classroom, so sports scholar Gretchen Kerr wonders why it's prevalent on the playing field and in the gym.

While sexual abuse is in the spotlight, thanks to numerous high-profile cases, Kerr said Canadian sport also needs to take a hard look at the potential damage inflicted by psychological abuse.

"There's a general societal awareness that when young people experience sexual harm, they suffer in one way or another for a long, long time," Kerr said. "And what the research shows, and I don't think it's as poignant in the minds of the general public, is that same can be said about psychological abuse, that when young people experience psychologically abusive relationships, the negative long-term consequences can be just as enduring and just as damaging."

Kerr and fellow University of Toronto professor Bruce Kidd spoke to Canadian sport leaders at a recent conference in Ottawa, and used several real-life examples from young athletes. There was the swim coach who hurled kickboards at kids. There was the coach who angrily chucked equipment around the locker-room. Or the coach who refused to speak to his team for a week after a loss.

One young athlete said that after a bad game, the team was required to show up at the field at 6 a.m. the next morning. The coach called it the "Breakfast Club." The players were forced to do sprints and push-ups until they threw up.

"It's shocking what coaches in particular can get away with in sport that we would never allow our kids' teachers to engage in," Kerr said. "Parents would be called on the carpet if they demonstrated these practices, bosses would be in trouble, and yet we allow coaches to treat young people this way."

In a study of 3,760 Canadian coaches by Kerr and fellow University of Toronto professor Ashley Stirling, 78 per cent reported witnessing emotional abuse.

This type of abuse, said Kerr, can occur in numerous forms, including derogatory comments, constant yelling, manipulation of attention and support, or the use of exercise as punishment.

Kerr has handled more than 200 complaints as an athlete welfare officer with Gymnastics Canada in the past 30 years, and estimates 95 per cent of the complaints are about psychological abuse.

"It dawned on me: how can the parents sit by and watch these behaviours when if the teacher did that, they'd be in to see the principal lickety-split? So we interviewed parents, and these are very well-meaning, often well-educated parents, who are introduced to the sport world and the first time they see these behaviours, they are taken aback, but they look around for cues from parents who've been in the world a little bit longer, and they see that they're not reacting. They also see the best kids at the club being treated this way. So they think 'Well, I guess this is just what it takes to create a top athlete."'

Kerr said what's perplexing is that kind of behaviour and attitude runs contrary to research on how people are best motivated.

"These practices in sport all run contrary. There's a huge gap between the research on teaching and learning, and what actually happens in the sport arena."