DeMar DeRozan says he was 'sacrificial lamb' for Raptors 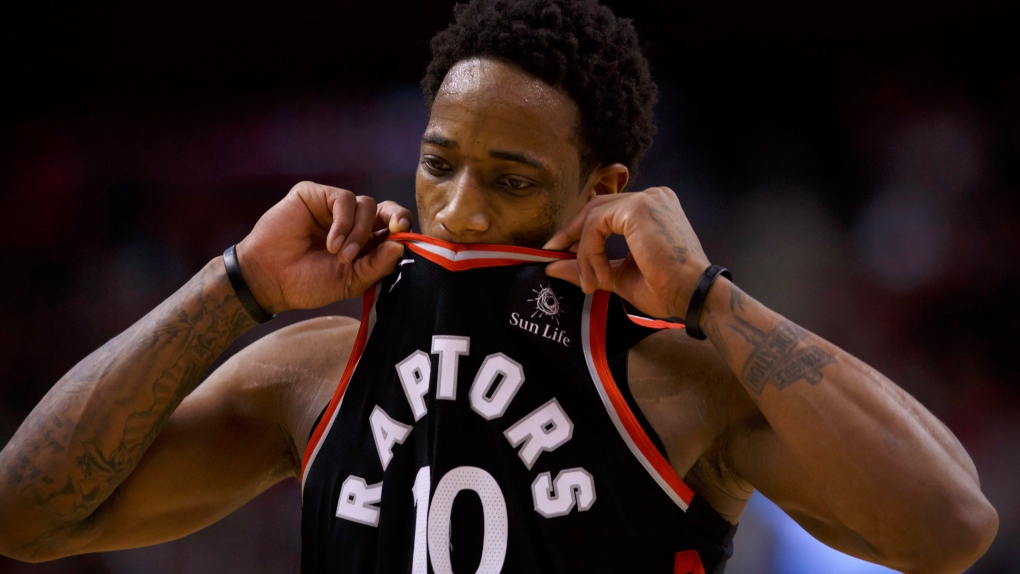 Toronto Raptors guard DeMar DeRozan (10) reacts during a time out during second half NBA basketball action against the Golden State Warriors in Toronto on Saturday January 13, 2018. (Cole Burston/THE CANADIAN PRESS)

Former Toronto star DeMar DeRozan says he was "the sacrificial lamb" in the Raptors' attempt to overcome their playoff shortcomings.

DeRozan was traded in an off-season blockbuster deak with San Antonio that brought Kawhi Leonard to Toronto after the Raptors were swept by LeBron James and the Cleveland Cavaliers in the second round for the second straight post-season.

Leonard's stellar playoffs has helped the Raptors exorcise some demons and advance to the NBA Finals for the first time.

In an interview with Bleacher Report, DeRozan, who played his first nine seasons in Toronto, said he helped lay the foundation for Toronto's run to the championship round.

"If it wasn't for all the years and groundwork that I did before then, none of them things would've been possible," he said. "I fought, I sacrificed, I pushed the limits to where I had to be the sacrificial lamb.

"You just have to sit back and understand, you are the reason so many things was even possible. To their credit, they probably felt like it was time to see what we could get to make that next jump."

DeRozan also said he is pulling for best friend and Raptors point guard Kyle Lowry to "accomplish something that we tried to do all those years."

Game 3 of the NBA Finals between Toronto and the Golden State Warriors goes Wednesday night in Oakland, Calif. The best-of-seven series is tied 1-1.